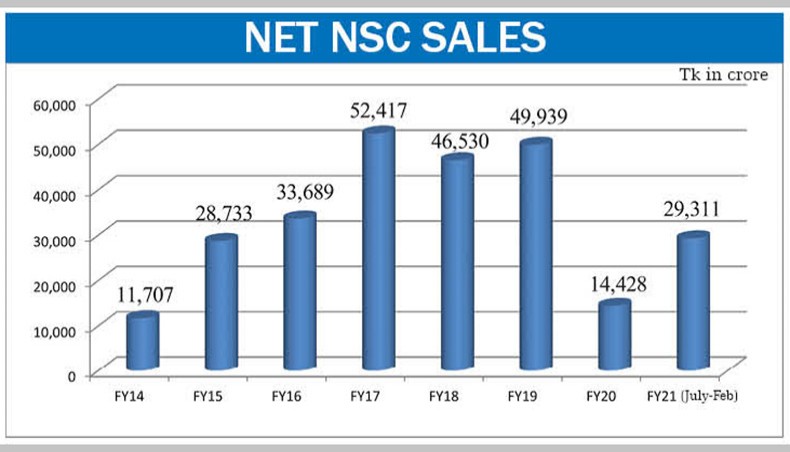 Net sales of National Savings Certificate remained significantly high in the July-February period of the current fiscal year as the government’s borrowing using the tools exceeded Tk 9,311 crore from its target of Tk 20,000 crore for the fiscal year 2020-2021.

Officials of the Bangladesh Bank and other commercial banks said that the plunge in the interest rate in banks against savings products was the main reason behind the surge in the NSC sales which had far better interest rates than bank deposits.

In July-January, the National Savings Directorate sold NSC worth Tk 75,227 crore against its principal payments of Tk 45,916 crore.

As a result, the government’s net borrowing against the NSC sales increased to Tk 29,311 crore in the first eight months of FY21 against its Tk 9,665.88 crore borrowing in the same period of the previous year.

In February, the NSD sold NSC worth Tk 9,609 crore against its principal payment of Tk 6,000 crore.

With the sales and principal payment, net NSC sales rose to Tk 3,609 crore in February 2021 against Tk 1,992.52 crore in the same period of the previous year.

Although there was scope to borrow funds at a lower interest rate from the banking sector, the government continued to borrow against the NSC and refrained from lowering the interest rate keeping in mind the needs of pensioners and other fixed income groups, an official of the central bank said.

On maturity of their FDR in December 2020, the bank offered them 5 per cent yield while the return is around 12 per cent in NSC, Abdullah said, adding that the interest rate gap between the bank and the NSC is around 7 percentage points, which prompted him to invest in the NSC as the returns are huge.

The situation in the NSC sales changed dramatically after the imposition of the 9-per cent ceiling on the lending rate on April 1, 2020 after which the deposit rate ceiling in the banks was pulled down to 6 per cent.

Due to the credit growth plunge in the banks and non-bank financial institutions following the coronavirus outbreak coupled with the injection of money by the central bank into the economy in 2020, the banks observed a sharp spike in idle money on their hands.

In turn, many banks lowered their deposit rates to as low as 3 to 4 per cent, causing depositors to become discouraged to keep funds with them.

Amid the heavy NSC buying spree and poor implementation of the annual development programme, the government’s bank borrowing turned negative in the July-February period of FY21 despite the dismal revenue collection by the National Board of Revenue.

The BB data showed that the government had repaid Tk 11,940.23 crore in bank loans in the eight months of FY21 even though it had projected to borrow Tk 84,980 crore in FY21.