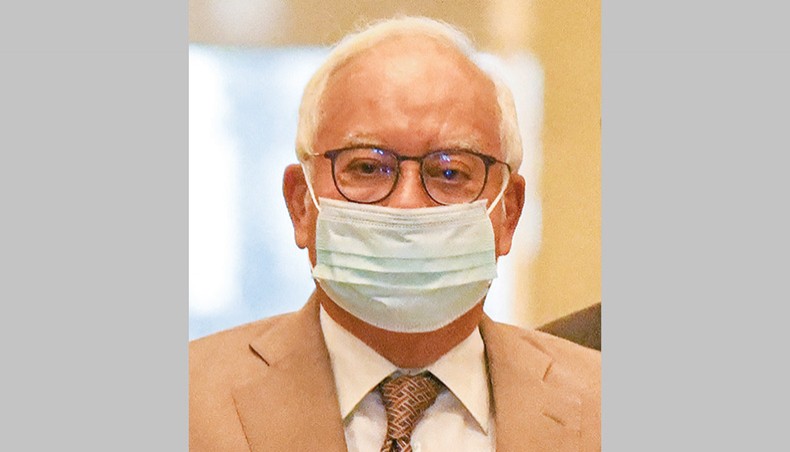 Former Malaysian leader Najib Razak began an appeal Monday against his corruption conviction and 12-year jail term over the multibillion-dollar 1MDB scandal, which contributed to his government’s downfall in 2018.

Najib was found guilty on all counts last year in the first of several trials he is facing related to the looting of the 1Malaysia Development Berhad sovereign wealth fund.

The 67-year-old — who remains free on bail — and his cronies were accused of stealing billions of dollars from the investment vehicle and spending it on everything from high-end real estate to pricey art. On Monday, the former prime minister began his first challenge at the Court of Appeal.

‘There was a miscarriage of justice,’ defence lawyer Muhammad Shafee Abdullah told reporters after proceedings wrapped up for the day.

He argued the judge in the original trial did not have sufficient experience in handling criminal cases.

‘This alone should make this appeal successful and the court can reverse the (earlier) judgement,’ he said.

Anger at the plunder played a large part in the shock loss of Najib’s long-ruling coalition at elections in 2018, and he was arrested and hit with dozens of charges following his defeat.

Following a lengthy trial, he was found guilty of abuse of power, money-laundering and criminal breach of trust over the transfer of 42 million ringgit ($10.1 million) from a former 1MDB unit to his bank accounts.

As well as the jail term, he was fined almost $50 million. He denies any wrongdoing.

At the start of the appeal, his lawyer sought to get proceedings delayed by a month, saying he wanted to obtain additional documents from overseas to add to the evidence.

But the three judges hearing the case dismissed the bid.

During the appeal, set to run until April 22, Najib’s lawyers will argue he had no knowledge of the transactions into his accounts, according to documents submitted to the court.

They are seeking to portray him as a victim and blame financier Low Taek Jho — a key figure in the scandal who has been charged in the United States and Malaysia — as the mastermind.

Low is believed to have played an influential role in the operations of 1MDB, although he held no official role.

The financier, whose current whereabouts are unknown, maintains his innocence.

If he loses the appeal, Najib still has a final chance to challenge the conviction at Malaysia’s top court.

Najib’s conviction came even after his scandal-plagued party returned to power as part of a coalition following the collapse of the reformist administration that ousted him at the 2018 polls.

It has destabilised the country’s ruling coalition, with Najib — who is still an MP — and other members of his party unhappy the charges were not dropped despite their support for the government.

The amounts involved in his first case are small compared with those in his second and most significant trial, which centres on allegations he illicitly obtained more than $500 million.

Najib’s wife, Rosmah Mansor — notorious for her vast collection of handbags and jewellery — was also arrested and put on trial for corruption following the 2018 elections.