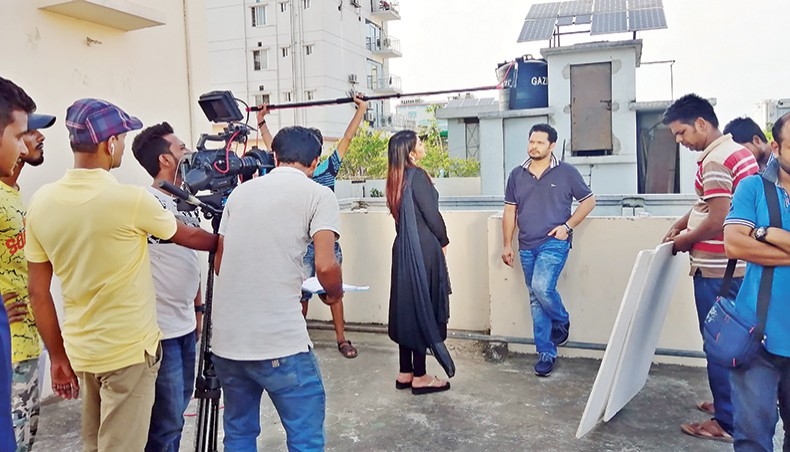 TV industry insiders have urged directors and artistes to shoot small-screen productions, comprising teleplays, drama series and others, on a limited scale amid the seven-day restriction imposed by the government to curb the second COVID-19 surge.

Things have to be in compliance with the health regulations and the mutual consent of the artiste-crew members-teleplay makers also need to be taken into consideration, they added. They, however, are worried about how the restrictions would impact the shootings for Eid special programmes.

The statement discouraged all members to carry on with shootings during the seven-day restriction announced by the government from April 5 to April 11, 2021.

The statement alerted all about the frightening turn the COVID-19 crisis recently took. So it would not be practical to ignore health risks and social security, it said, adding that all concerned artistes and technicians are being urged to avoid public gatherings for seven days.

When contacted, FTPO chairman Mamunar Rashid said, ‘We should value life above all else in this world. The pandemic is a curse for all those who make a living working on a day-to-day basis. Last year’s lockdown left a huge financial impact on our industry. Though a lot of investment has been made in this sector targeting the upcoming Eid festival, the new restrictions will affect the shootings for Eid special programmes.’

‘We urge those who have to attend emergency shootings to complete their work as soon as possible following the health directives and stay at home until the situation improves,’ Mamunar Rashid added.

‘A lot of investment has been made in this sector on programmes targeting the upcoming Eid festival. So shootings on limited scale will continue even during the restriction. However, in the current situation, no artiste or crew member can be forced to participate in shootings. And the shootings should take place between 6:00am and 6:00pm,’ said Ahsan Habib Nasim.

Television Natyakar Sangha president Masum Reza told New Age that all shooting floors should be kept closed for a week.

‘It is an emergency situation for us. The suffering is just for the time being. We all should follow the health directives on shooting floors. I believe we should close all shooting floors for a week, which will be beneficial for us in the long run. As the government has announced the seven-day restriction, shootings should discontinue,’ said Masum Reza.