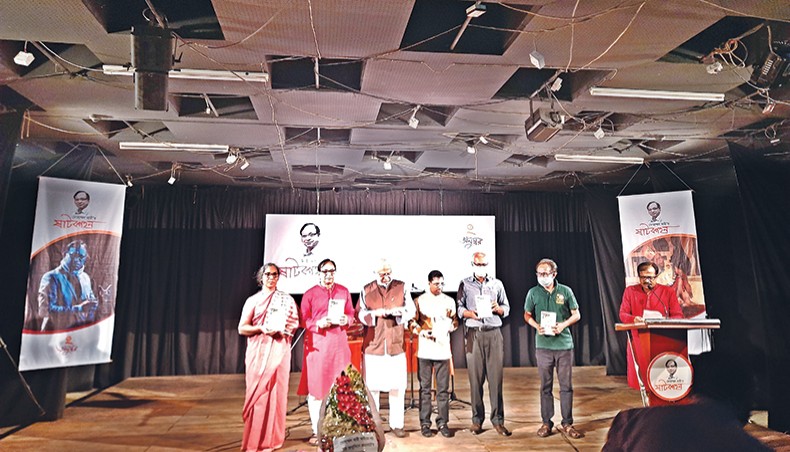 Theatre troupe Anuswar felicitated its chief Mohammad Bari at a programme held at the Studio Theatre Hall of Bangladesh Shilpakala Academy on Saturday.

Playwright, director and actor Mohammad Bari was born on April 3, 1961 in Damodarpur, Rangpur.

The event began with Anuswar artistes singing the song Shatkahaner Gaan, which has been penned and tuned by Mahfuz Sumon.

Saif Suman delivered the welcome speech at the programme, which was anchored by Proshanta Haldar.

‘Mohammad Bari is not only the chief of theatre troupe Anuswar but also a popular playwright, actor and organiser. He has also acted in small screen productions. I wish him good luck in his future endeavours,’ said Ataur Rahman.

‘Mohammad Bari has been playing an important role in promoting theatre practices. He is a free thinker and progressive individual. I wish him a long life filled with happiness,’ said Mamunur Rashid.

‘I want to thank all who have supported me during my journey. I have dedicated my life to theatre.  I want to keep working for the progress of the country’s theatre scene,’ said Mohammad Bari.

Mohammad Bari became involved in cultural activities in his early teenage. He began his theatrical career as a member of theatre troupe Dhaka Padatik in 1990. He co-founded theatre troupes namely Anyadal Natya Sampraday and Theatre Art Unit in 1991 and 1992 respectively. He founded theatre troupe Anuswar on July 25, 2019 and became the chief of the troupe.