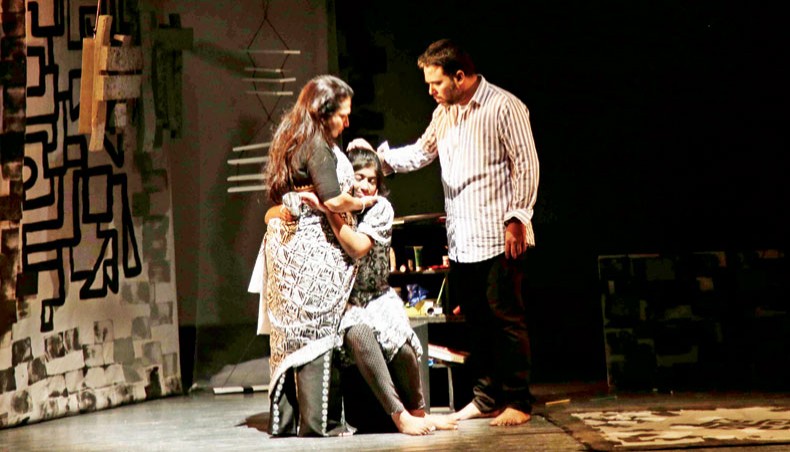 A scene from Prerona. — Sony Ramany

The play, written and directed by the acting chief of the troupe Sabil Reza Chowdhury, aims at raising awareness about autism. It revolves around a child with autism named Pori.

Pori lives with her parents. Her father Santo is a banker and mother Mayabati is a housewife. Santo cannot stand Pori and often quarrels with Mayabati, who tries her best to take care of Pori.

Pori discovers a passion in painting. Her mother tries her best to groom her. Pori participates in an international painting competition for children with autism and the play moves forward.

‘Theatre plays a significant role in spreading awareness among people. Children with autism should not be neglected. Their needs must be addressed. If given the opportunity, they too can thrive. Prerona, a 50-minute play, aims at making the people aware about autism. I hope the audience have enjoyed it,’ Sabil Reza Chowdhury told New Age.

‘I found the play both educative and entertaining. Many parents still consider autism as a taboo. Children with autism should not face discrimination in society,’ Tahmina Akter, an audience, told New Age.

Polash Hendrey Sen is the set designer, Omlaan Biswas is the light designer, Mamun Abdullah is the music director and Sadia Baidum Makhnun is the costume designer of the production.

Besides, the programme featured a discussion where Bangladesh Shishu Academy chairperson actress Lucky Enam, thespian Ataur Rahman and SWID Bangladesh chairman Jowaherul Islam Mamun, among others, were present as guests.

‘Theatre can bring social change by raising awareness in society. The play Prerona brings to light plight of children with autism and portrays that such children can thrive if they are given the opportunity. The production is both entertaining and educative. I thank Padatik for staging the play,’ said Lucky Enam.

‘Theatre not only entertains us but also provides us precious knowledge and information. Prerona tells the story of a child with autism named Pori. Such plays can inspire children with autism and raise awareness about autism among the people. We have to ensure rights of children with autism in society,’ said Ataur Rahman.