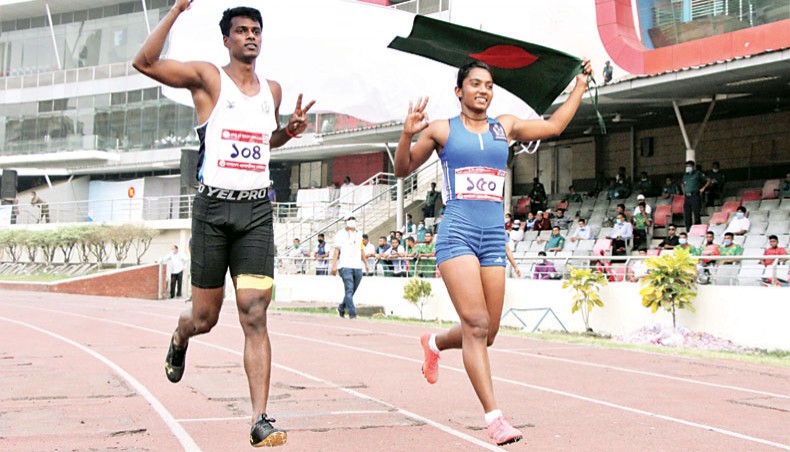 Bangladesh navy athletes Mohammad Ismail (L) and Shirin Akhter give lap of honour after emerging champions in the men’s and women’s 100metre sprint events of the Ninth Bangabandhu Bangladesh Games at the BNS on Saturday.— Courtesy photo

Ismail clocked 10.50seconds while Shirin clocked 11.60seconds in hand timing to bag gold medals for the first time in the games.

In the National Championship held at the same venue in January 2021, Ismail clocked 10.55 seconds while Shirin clocked 11.80 seconds in the same event.

‘This is my first title in sprint in the Bangladesh Games. Overall I have won fastest man’s title four times at national level competitions since 2018,’ said Ismail.

‘It was difficult for me to continue practice during the coronavirus pandemic. If I get to practice regularly under high profile coach, the timing would be better,’ he added.

‘It is my first gold in Bangladesh Games as I finished runners-up in the last edition in 2013,’ said Shirin.

She also claimed that this was overall her 12th title in the event at national level competition.

‘It’s a great feeling that I clinched the fastest women’s title at national level for the 12 consecutive time,’ said the 26-year old sprinter.

Meanwhile, in other events, Navy’s M Masud Khan announced his retirement from the track and field right after winning golf in the men’s 110m hurdles.

In cycling, two new national records were set. Army’s Foysal Hossain bagged gold setting up records in the men’s 1000m time trial event as he clocked 1:20.40 minutes to break the previous record of 1:26.10 minutes made by Army’s Ekramul Islam in 2017.

Chattogram bagged gold in the women’s basketball competition after they defeated Dhaka by 8-6, Rajshahi by 14-2, Khulna by 9-8 and Rangpur by 7-5 points at the Dhanmondi Basketball Gymnasium.

Bangladesh Ansar dominated in women’s wrestling by bagging three gold medals with Mashinu Marma emerging champion in the 53kg weight category, Razia Sultana in the 57kg and Sukanti Biswas in the 62kg category while Army’s Sharmin Akter won in the 59kg weight category.