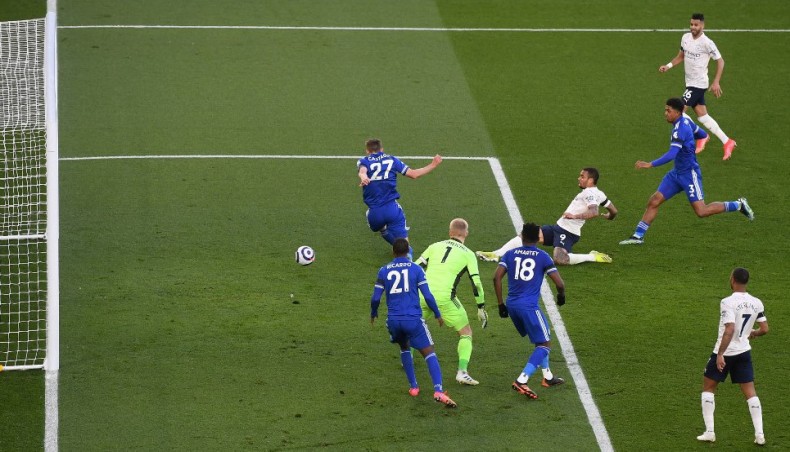 Manchester City moved closer to the Premier League title as the runaway leaders won 2-0 at Leicester, while lowly West Bromwich Albion handed Thomas Tuchel the first defeat of his Chelsea reign with a stunning 5-2 victory on Saturday.

Liverpool took full advantage of Chelsea's shock collapse to close within two points of the top four with a 3-0 win at Arsenal.

City are 17 points clear of second-placed Manchester United after a remarkable 15th successive away win in all competitions.

United can close the gap with a win against Brighton on Sunday in the first of two games in hand, but it is only a matter of time before Pep Guardiola's men celebrate their third title in four seasons.

Goals from Benjamin Mendy and Gabriel Jesus killed off third-placed Leicester in the second half at the King Power.

City, chasing an unprecedented quadruple, will go into their Champions League quarter-final first leg against Borussia Dortmund on Tuesday in confident mood after avenging the 5-2 thrashing they suffered against Leicester in September.

‘It is a big step to winning the Premier League,’ Guardiola said.

‘The Premier League is the nicest competition to win. It is 11 months and it is so tough. We are close.’

City controlled possession and their dominance was rewarded in the 58th minute.

Mendy cleverly eluded Marc Albrighton in the Leicester penalty area before curling a fine finish into the far corner with his weaker right foot.

Christian Pulisic gave Chelsea the lead in the first half, but Blues defender Thiago Silva was sent off two minutes later for a second booking.

Second-bottom West Brom made the most of that gift in first half stoppage-time as Matheus Pereira struck twice in quick succession.

They were the first home league goals conceded by Chelsea since Tuchel arrived in January, also ending a run of seven successive clean-sheets in all competitions.

Shell-shocked Chelsea capitulated in the second half as Mbaye Diagne got Albion's third before Callum Robinson struck twice.

Mason Mount's reply was no consolation for Chelsea, who conceded five at home in the league for the first time since 2011.

Chelsea remain in fourth, but West Ham and Tottenham would both go above them if they win their games in hand later this weekend.

‘We cannot lose our heads now and take away the trust we have in these players,’ Tuchel said.

‘It was the moment after the game to be honest, be calm and to tell everybody to breathe. This is my responsibility. I trusted this line-up.’

City's win meant Liverpool can now not mathematically retain their title, but they are back in the race for Champions League football next season thanks to their first successive league victories since January.

Jurgen Klopp's men looked more like their old selves in a dominant display that got its reward thanks to three goals in 18 second-half minutes.

Jota rounded off the scoring with his sixth goal in four games for club and country.

Arsenal remain in ninth with their season now hinging on success in the Europa League.

Leeds moved level on points with the Gunners as they pushed bottom-of-the-table Sheffield United closer to relegation with a 2-1 win in a Yorkshire derby at Elland Road.