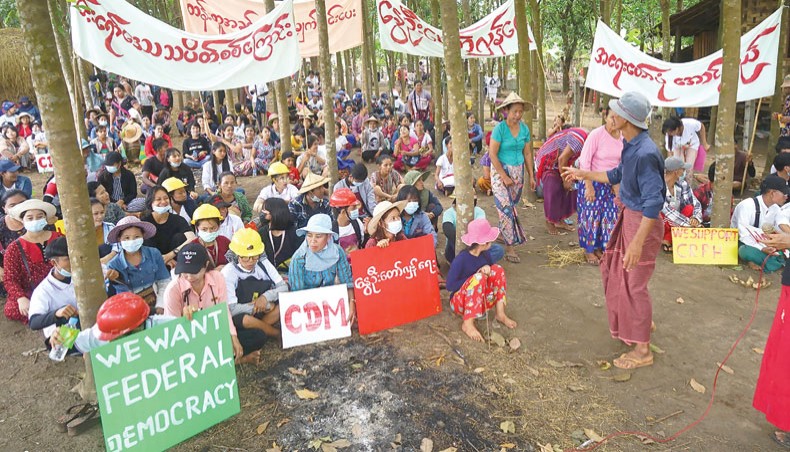 Protesters gathering in a village during a demonstration against the military coup in Dooplaya district in Myanmar’s eastern Karen state on Friday. — AFP photo

India on Friday issued its strongest condemnation yet of the Myanmar junta’s escalating crackdown against protesters, calling for the restoration of democracy and an end to violence across its eastern border.

India — which rivals China for regional influence — had so far not followed other international powers’ outright rejection of the February 1 coup in Myanmar that ousted civilian leader Aung San Suu Kyi.

But New Delhi’s foreign ministry Friday appeared to take a stronger line, condemning ‘any use of violence’ and urging Myanmar to release the hundreds of political prisoners now languishing in the country’s jails.

‘We believe that the rule of law should prevail. We stand for the restoration of democracy in Myanmar,’ Arindam Bagchi, the foreign ministry spokesman, told a media briefing.

India is ready to play a ‘balanced and constructive role’ to resolve the crisis, he added.

‘We have urged the release of political prisoners and support any attempts at resolving the current situation including through the efforts of Association of Southeast Asian Nations.’

Delhi is ‘engaged’ in international efforts on Myanmar, Bagchi said, including at the UN Security Council, where India is a non-permanent member.

India has long sought to build closer ties with Myanmar in a bid to counter China’s influence and has invested in projects worth hundreds of millions of dollars.

But that stand has been tested as violence has ramped-up and scores of Myanmar police and their families have fled into two northeastern border states.

One of the states involved, Mizoram, this week withdrew an order to refuse food and shelter to the refugees amid fierce public criticism of the move.

The government also came under criticism after an Indian defence attache attended a Myanmar Armed Forces Day military parade in Naypyitaw last week — the same day that at least 107 people — including seven children — were killed as security forces opened fire on anti-coup protesters.

The spokesman said it was part of the ‘regular diplomatic responsibilities’ of the Indian embassy in Myanmar.

Meanwhile, Myanmar’s junta faced fresh international criticism Friday over the deaths of more than 40 children and the ‘forced disappearance’ of hundreds of people in its crackdown on pro-democracy protests.

The military’s ruthless suppression of demonstrations against its February 1 power grab has left 543 civilians dead, including 44 children, according to the Assistance Association for Political Prisoners, a local monitoring organisation.

As well as breaking up protests with tear gas, rubber bullets and live rounds, security forces have detained some 2,700 people.

Violence has ramped up in recent weeks, with Save the Children saying the death toll of youngsters had more than doubled in the past 12 days.

‘We are shocked that children continue to be among the targets of these fatal attacks, despite repeated calls to protect children from harm,’ the charity said in a statement.

‘It is especially horrifying that several of these children were reportedly killed at home, where they should have been safe from harm.’

The authorities have made numerous arrests during night raids on the homes of people suspected of supporting the rallies or the civil disobedience movement that has sprung up aimed at stopping the military from running the country.

Human Rights Watch said the junta had ‘forcibly disappeared’ hundreds of people, refusing to confirm their location or allow access to lawyers.

‘Concerned governments should demand the release of everyone disappeared and impose targeted economic sanctions against junta leaders to finally hold this abusive military to account.’

Outrage from world powers has been growing at the increasing violence, and on Thursday the UN Security Council unanimously ‘expressed deep concern at the rapidly deteriorating situation’, condemning violence against peaceful protesters.

Britain announced a new round of sanctions, this time targeting the junta’s extensive business interests, as well as a $700,000 contribution towards UN efforts to document serious human rights violations in Myanmar.

But so far neither sanctions nor calls for restraint have shown any sign of holding back the junta as it struggles to quell the widespread unrest.

There were more protests around the country on Friday, according to local media reports.

In Yangon, people left flowers at bus stops and other public spots in memory of those killed in the crackdown.

The junta has throttled communications in an effort to stop news getting out, and on Thursday it ordered a complete shutdown of wireless internet services.

The 75-year-old, a democracy icon in Myanmar for decades, faces a raft of charges and conviction would see her barred from political office for the rest of her life.

She appeared in court by video link on Thursday and appeared in good health, according to her legal team, despite two months in detention.