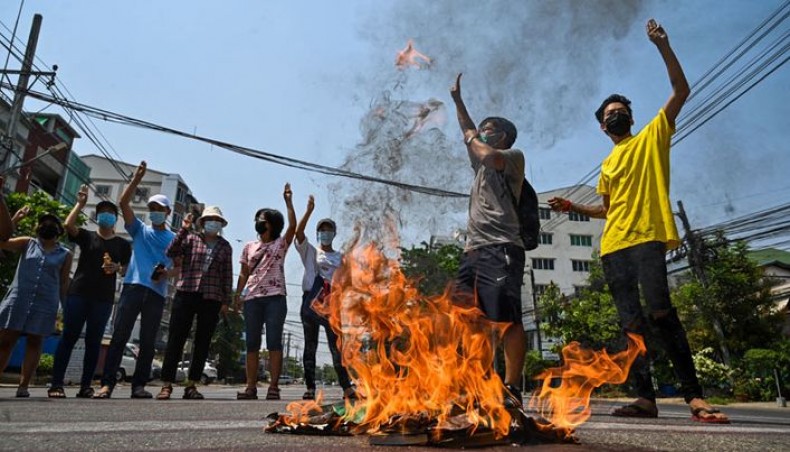 Protesters make the three-finger salute as copies of the 2008 constitution are burnt during a demonstration against the military coup in Yangon's South Okkalapa township on April 1, 2021. -- AFP photo

The United Nations Security Council on Thursday ‘strongly condemned’ the deaths of hundreds of civilians in Myanmar, in a unanimous statement watered down by China after two days of tough negotiations.

‘Members of the security council expressed deep concern at the rapidly deteriorating situation and strongly condemned the use of violence against peaceful protestors and the deaths of hundreds of civilians, including women and children,’ read the statement, initiated by former colonial power Britain.

In earlier versions of the text, obtained by AFP, Western nations wanted to include a ‘readiness to consider further steps’ — a reference to the possibility of international sanctions.

Beijing also insisted on softening a reference to the ‘killing’ of hundreds of civilians and changing it to civilian ‘deaths’.

Still, despite the lengthy negotiations, getting the security council to speak with one voice sent a ‘very important signal,’ one ambassador said on condition of anonymity.

Since the February 1 coup, the Security Council has issued three unanimous statements on Myanmar.

But Beijing, which has never recognized the existence of a coup, reduced the scope of the negotiated texts each time.

Moreover, the security council’s positions have had little effect on the military so far.

On Wednesday, the UN’s special envoy on Myanmar called for strong actions against the junta and warned of a possible ‘bloodbath’ and the risk of civil war.