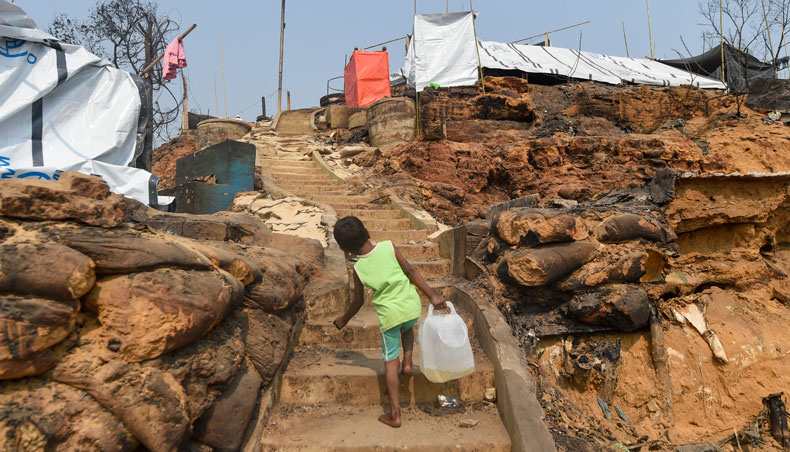 A Rohingya refugee child carries water to her temporary shelter days after a fire burnt their home at a refugee camp in Ukhia, in the south-eastern Cox’s Bazar district on March 25, 2021. — AFP photo

The fire destroyed about 9,500 shelters and also reduced to ashes over 1,600 vital facilities, including hospitals, schools, and food and aid distribution centres.

As of Tuesday, at least 11 people are confirmed to have perished in the fire and over 300 are still missing, reports the UN News.

Richard Ragan, UN World Food Programme country director in Bangladesh, said that the scale of the fire was ‘unprecedented’ and that the agency was ‘determined’ to help those affected get their lives back to normal as quickly as possible.

‘WFP, together with our partners and thousands of volunteers, have supported the families since the start of the tragedy, in meeting their most urgent needs of food and water. Where two of our nutrition centres once stood, debris were cleared in record time, stocks were replenished, and services resumed for children and their mothers,’ he said.

According to WFP, its top priority now was providing food to affected families, until they could have access to shelters and cooking stoves. It aimed to reopen electronic voucher outlets to allow families to purchase staple and fish foods.

The agency had also erected temporary structures, from which it was providing breastfeeding support and counselling to mothers, and additional food to children under five. ‘We’re determined to do what we can to help them get their lives back to normal as quickly as possible,’ Ragan added.

The UN International Organisation for Migration and the UN refugee agency have also upped their response, deploying mental health and psychosocial support teams to help refugees who lost everything in the fire. So far, over 5,000 people have been provided with emotional and psychosocial support, and more than 700 with psychological first aid.

UNHCR teams on the ground are monitoring the safety and security of refugees, and working to address the needs of separated children, spokesperson Andrej Mahecic said.

‘Since the fire, together with our partners, we’ve identified more than 600 separated girls and boys who have been reunited with their families. Our protection partners also established two child protection helplines and four reunification help desks,’ he added.

Refugee volunteers are also supporting affected families, according to the UNHCR spokesperson. They were among the first responders to help combat the fire and since then have been helping older refugees, children and pregnant women find shelters, escorting people to health care facilities, and identifying and referring refugees with specific needs to relevant services.

The UNHCR spokesperson also called for additional resources to address the immediate aftermath of the fire, adding, ‘We are asking government and private sector donors to keep their contributions flexible, thus allowing their use across the overall operation.’