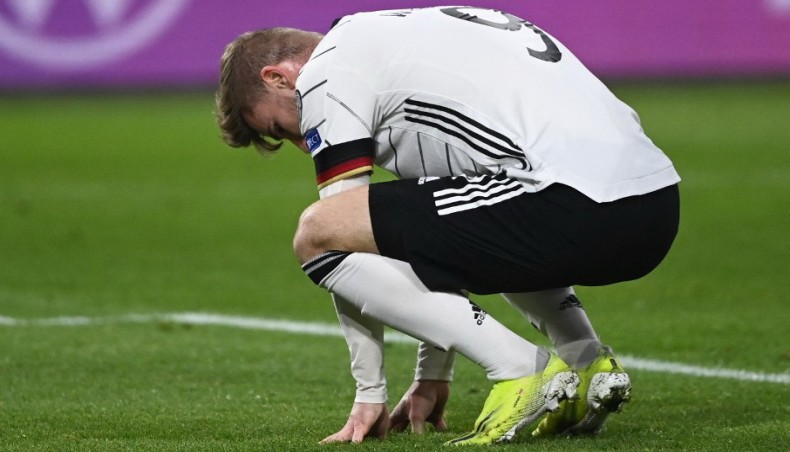 Napoli midfielder Eljif Elmas secured a famous victory for North Macedonia in Duisburg, scoring five minutes from time to give his country a second win from three Group J matches.

Veteran striker Goran Pandev, 37, put the visitors in front just before half-time but Ilkay Gundogan levelled from the spot after Leroy Sane was fouled in the area.

Timo Werner missed a glorious chance after coming off the bench, and Elmas condemned the four-time world champions to a first defeat in qualifying for the global showpiece since 2001 when he steered in a cut-back from Arijan Ademi.

Germany are level alongside North Macedonia in a section led surprisingly by Armenia, who won for the third time in as many games thanks to two late goals in a 3-2 victory over Romania.

Antoine Griezmann scored the only goal of the game in Sarajevo as France recorded a second away win in four days over Bosnia following their 2-0 success in Kazakhstan at the weekend.

After being held 1-1 at home by Ukraine in their opening game on the road to the 2022 finals in Qatar, France are now in a strong position at the top of Group D.

Harry Kane put England ahead with a first-half penalty after a foul on Raheem Sterling, but a mistake by John Stones allowed Poland to level through Jakub Moder.

England regained the lead with five minutes left when Maguire smashed home after central defensive partner Stones headed a corner back across goal.

The nervy win means England top Group I with nine points after wins earlier in the international window against San Marino and Albania.

Goals from Dani Olmo, Ferran Torres and second-half substitute Gerard Moreno lifted Spain to a 3-1 victory over Kosovo and top of Group B.

However the qualifier in Seville was overshadowed by a pre-match diplomatic dispute, stemming from the description of Kosovo as a ‘territory’ by the Spanish Football Federation when it published Spain's group fixtures.

Stefano Sensi scored just after his introduction as a half-time substitute to help Italy, who failed to qualify for the 2018 World Cup, register a third successive win in Group C.

Scotland are second in the group after easing to a 4-0 win over the Faroe Islands. John McGinn bagged two goals while Che Adams and Ryan Fraser completed the scoring.

Iceland, in the same group as Germany, picked up their first qualifying points with a 4-1 win away to Liechtenstein.

Northern Ireland drew 0-0 at home to Bulgaria while Ukraine were held 1-1 by Kazakhstan in Kiev, a third consecutive draw for the side coached by former national team star Andriy Shevchenko.