Characters in a Sartre play 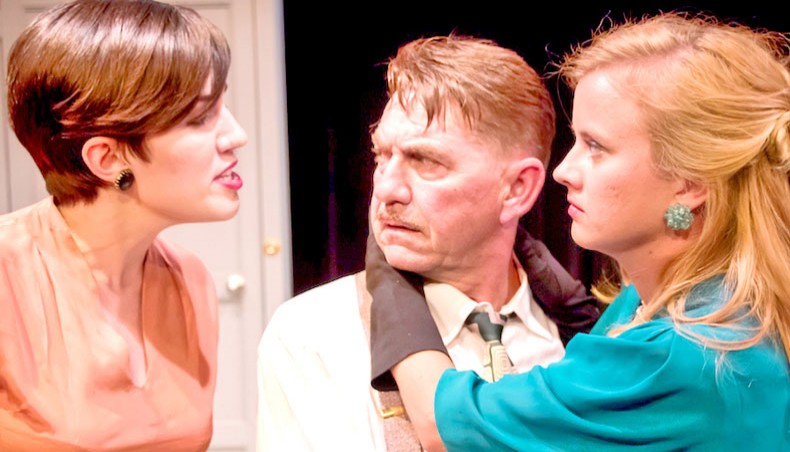 Garcin, Inez and Estelle in Sartre’s No Exit. — lbpost

THE search for petty advantages has been the bane of larger quests — as true of politics as of any other public sphere. The Nazis, as everyone knows, rose on the rubble of a small-minded opposition, be they social democrats, socialists or communists fixated on a delusional tiny gain that may have seemed critical to them at the time but proved to be the collective undoing of German democracy and at what cost. Pakistan clearly lost its eastern half to personal squabbling at the cost of the big picture. India’s fractious opposition criminally created the ground for Narendra Modi to sidle close to seizing absolute power.

But the opposition is living in the make-believe world of Garcin, Inez and Estelle, the three famous characters from Sartre’s play No Exit. The three were condemned to hell where they meet only to hide the sin for which each was being punished. By the time they are emboldened to confess to their crimes, they realise it is already too late as there is no exit from the dull hell nor from each other’s company.

Last week, Nawaz Sharif’s party was engaged in angry exchanges with Bilawal Bhutto-Zardari’s group. It had the flavour of Mayawati charging Mulayam Singh with betrayal, not that Mulayam Singh was innocent.

The Pakistan Peoples Party, according to the Pakistani Muslim League, in a replay of an older disruptive tiff, went behind its back to win the post of leader of the opposition in the Senate that too by colluding with the treasury benches. What was the issue the two parties came together to address? They were to collectively challenge prime minister Imran Khan’s alleged misrule. The animus could derail the momentum to take on the bigger challenge. But this has happened before, several times.

In India, the Bharatiya Janata Party experiment of 1977 is cited as a good example of opposition parties which came together ostensibly to confront Indira Gandhi’s misrule but that were soon found carrying their own axes to grind in the melee, and their own prizes to covet. The result was a graceless parting of ways. Their collective bête noire returned to power to continue to terrify them till she was laid low by her own bodyguards.

The Hindutva component in the BJP moved swiftly to ban history textbooks like its life depended on it, a move that was inspired by its sectarian ideology. The left promptly got busy with its mandate to rule West Bengal. It didn’t lose time to align its Marxist perspective on Indian politics with the exigencies specific to Kolkata. It was the party that shot down Jyoti Basu’s candidature as prime minister for no known reason other than a discussion between its Kerala and West Bengal branches. The majority of Indian supporters still remain dazed. Today, it seems to have spent more time hosting Durga Puja festivals than educating the cadre with historical materialism. And what are the leaders busy with? They have discovered in Mamata Banerjee an enemy more dangerous than the BJP, a conclusion the rest of India is struggling to divine.

The left has reportedly excluded Urdu spoken by many Muslims in West Bengal from the range of languages in which it has printed its election manifesto for the assembly polls currently under way. Professor Ali Javed, who heads the Progressive Writers Association in India, shared a troubling story. Word was sent to former communist chief minister Buddhadeb Bhattacharjee by the head of the erstwhile pro-Moscow party in Delhi that the PWA wished to organise an Urdu conference in Kolkata. ‘Do you want us to promote another partition?’ came the tart reply, an understanding that perhaps explains how the Communist Party of India-Marxist brought out a party paper from Delhi in Urdu and folded it in no time.

If Mamata Bannerjee does lose to the BJP in May, as some analysts fear she could, we know who to credit the disastrous outcome to. Having said this, it’s ironical if true that it’s difficult to see a meaningful opposition coalition without the involvement of the left. No exit for the left or its disgruntled supporters from each other’s company.

Ditto for Delhi chief minister Arvind Kejriwal. He led the chorus from opposition ranks that welcomed the August 5, 2019 annexation of Jammu and Kashmir and the dissolution of its status into two union territories to be ruled directly by New Delhi. Last week, the Modi government passed a law that reduced Kejriwal’s office to a toothless entity subservient to the will (or whims) of the lieutenant governor appointed by and reporting to New Delhi. Kejriwal has cried foul, but his critics including those who had opposed the smashing up of Jammu and Kashmir are calling it his comeuppance.

Kejriwal has proved to be no different from other opposition parties in projecting himself as a pious Hindu leader. Elderly Hindus under his rule would be accorded state support to go on pilgrimages. On the other hand, Kejriwal is also the one man who has taken on crony capitalism frontally. Perhaps the new law to clip his wings has been prompted by his intrusive stalking of big businesses considered close to the prime minister. For that Kejriwal remains indispensable in challenging the Modi regime.

Neither the left nor Kejriwal has formally identified the crisis facing India as resembling fascism, something writer Khushwant Singh had noted in 2003 in a small book called End of India.

‘Those of us today who feel secure because we are not Muslims or Christians are living in a fool’s paradise. The Sangh is already targeting the leftist historians and “westernised” youth. Tomorrow it will turn its hate on women who wear skirts, people who eat meat…  prefer allopathic doctors to vaids, kiss or shake hands in greeting instead of shouting “Jai Shri Ram”. No one is safe. We must realise this if we hope to keep India alive.’ Are Garcin, Inez and Estelle listening?