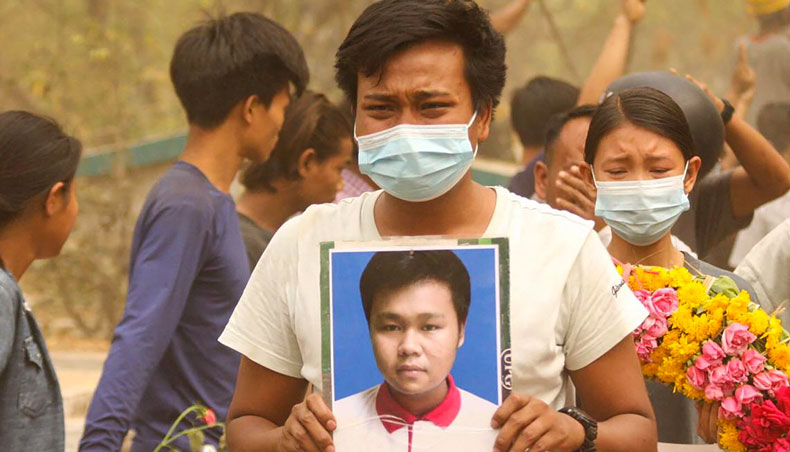 This photo taken and received from an anonymous source via Facebook on March 29, 2021 shows a relative holding the portrait of one of three protesters, who were shot dead the day before amid a crackdown by security forces on demonstrations against the military coup, during their joint funeral in Monywa, Sagaing region. — AFP photo

France on Monday slammed ‘blind and deadly’ violence in Myanmar where the ruling junta’s ruthless crackdown left more than 100 people dead on Saturday, the deadliest weekend since the military coup.

‘The security forces in Myanmar have reached a new stage in blind and deadly violence and have again used arms against the population, killing more than 100, including very young children,’ French foreign minister Jean-Yves Le Drian said in a statement.

‘While sanctions have already been decided with our European and international partners I call on all Myanmar forces to break the deadlock into which they are leading their country, put an end to the violence, release unconditionally and immediately all political prisoners, and resume the path of dialogue,’ Le Drian said.

At least 107 people, including seven children, were killed Saturday, the United Nations said, as the regime staged a major show of might for Armed Forces Day – an annual parade showcasing Myanmar’s military prowess.

More than 450 people have been killed in the crackdown on protests since the February 1 coup, according to the Assistance Association for Political Prisoners monitoring group, as security forces have used rubber bullets and live rounds to break up demonstrations.

The armed forces ‘have undermined, on the very day of the Armed Forces Day, their raison d’etre, which is to protect populations,’ Le Drian said, adding, ‘Since then, the death toll has risen even higher and Myanmar is sinking ever deeper into tragedy.’

He said that France would not let up in its efforts with its European and international partners to ‘support the legitimate aspirations of the people of Myanmar’.