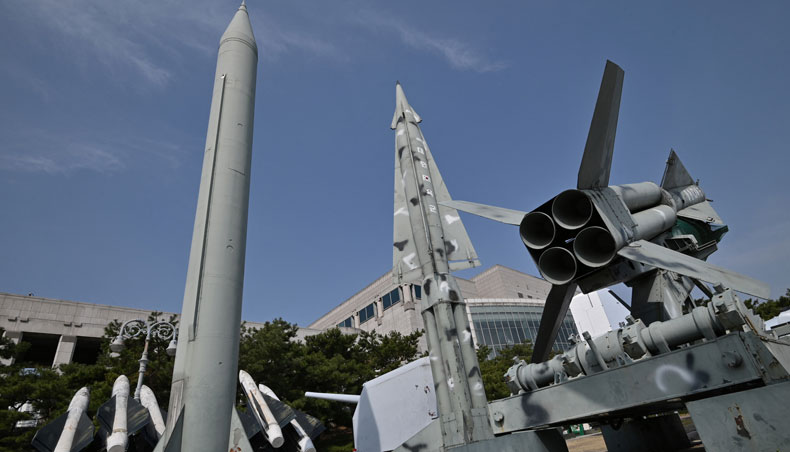 Replicas of a North Korean Scud-B missile and South Korea’s Nike missiles are displayed at the Korean War Memorial in Seoul on March 24, 2021. — AFP photo

North Korean leader Kim Jong Un’s influential sister slammed the South’s president on Tuesday as ‘a parrot raised by America’ after he criticised a missile test by Pyongyang.

The nuclear-armed North has a long history of using weapons tests to ramp up tensions, and last week carried out its first substantive provocation since US president Joe Biden’s inauguration.

The US and Japan said that the weapons fired were ballistic missiles — banned under a UN Security Council resolution — while Pyongyang insisted they were tactical guided weapons.

South Korean president Moon Jae-in, who has long backed engagement with Pyongyang, made a carefully measured speech on Friday — when the South marked three deadly attacks by the North since 1999 — that did not specifically refer to the missile test.

Actions that stand in the way of resuming dialogue between Pyongyang and Washington were ‘undesirable’, he said.

His speech prompted denunciation from Pyongyang, with Kim Yo Jong, a key adviser to her brother, calling it the ‘height of effrontery’.

She had been ‘struck speechless’, she said in a statement carried by the official KCNA news agency, referring to Moon only as the South’s ‘chief executive’ and not by his name or title.

Calling him ‘a parrot raised by America’, she said he was employing ‘the gangster-like logic of the US’.

It is a far cry from the diplomacy of 2018, when Moon visited Pyongyang and gave a speech to a vast crowd in the May Day Stadium, where at one point an image of him and Kim Jong Un was displayed across a grandstand.

The Biden administration is in the final stages of a review on policy towards the North, and the new US president has repeatedly said he will look to rebuild the alliances with partners such as South Korea that suffered under his predecessor Donald Trump.

Biden has warned the North that ‘there will be responses if they choose to escalate’ testing.

He left the door open for further diplomacy, but the White House said on Monday a summit between him and Kim was ‘not his intention’.

European members of the UN Security Council have asked for a meeting on Tuesday to discuss the launch.