Violence in Myanmar could be catastrophic for youth: UNICEF 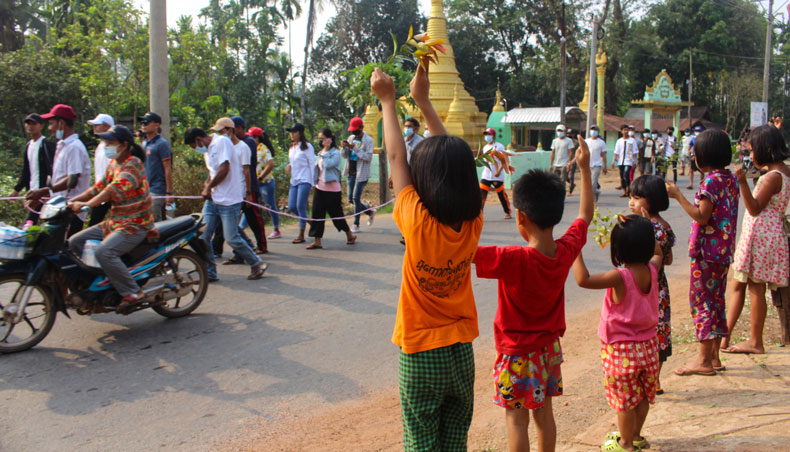 This hand-out photo taken and released by Dawei Watch on March 27, 2021 shows children gesturing to protesters during a demonstration against the military coup in Dawei. — AFP photo

The violence meted out by Myanmar’s military since last month’s coup risks inflicting ‘catastrophic’ consequences on the country’s younger generation, the head of the United Nations children’s agency warned on Sunday.

The comments from UNICEF executive director Henrietta Fore came after at least seven children were among more than 100 people killed by security forces on Saturday.

Myanmar has seen worsening brutality since the military ousted and detained civilian leader Aung San Suu Kyi on February 1, and mass protests demanding a return to democracy have been quelled with deadly responses by the ruling junta.

‘I am appalled by the indiscriminate killing, including of children, taking place in Myanmar and by the failure of security forces to exercise restraint and ensure children’s safety,’ Fore said.

‘In addition to the immediate impacts of the violence, the longer-term consequences of the crisis for the country’s children could be catastrophic,’ she added.

Fore said that already the delivery of critical services for children had ground to a halt, with almost one million kids now without access to key vaccines and nearly five million missing out on vitamin A supplements.

‘This loss of access to key services, combined with economic contraction which will push many more into poverty, puts an entire generation of children and young people in peril,’ she said in a statement.

Myanmar’s generals staged a major show of might Saturday for the annual Armed Forces Day as the death toll from crackdowns since the coup climbed to at least 423, according to a local monitoring group.

The United Nations put Saturday’s death toll at 107 people –- including seven children –- while Fore said 10 children reportedly had been killed.

In all, 35 children had ‘allegedly’ lost their lives since the coup, she said.

‘Security forces must immediately refrain from perpetrating abuses of child rights and ensure the security and safety of children at all times,’ Fore said.