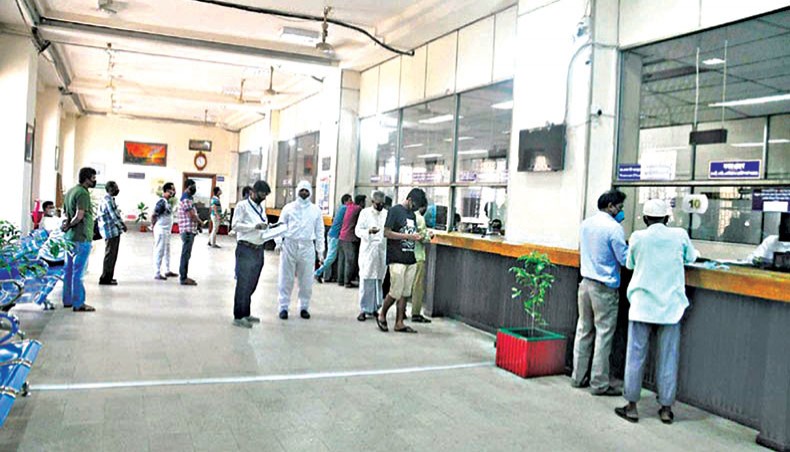 A file photo shows clients receiving services at a branch of a state-owned bank in the capital. Four state-owned commercial banks, Sonali Bank, Janata Bank, Agrani Bank and Rupali Bank — made a little progress in recovering loans from the banks’ top 20 defaulters in the year 2020 that left the entities’ financial indicators, including the capital base, in a dissatisfactory level.— New Age photo

Four state-owned commercial banks, Sonali Bank, Janata Bank, Agrani Bank and Rupali Bank — made a little progress in recovering loans from the banks’ top 20 defaulters in the year 2020 that left the entities’ financial indicators, including the capital base, in a dissatisfactory level.

According to a Bangladesh Bank report on the SCBs’ performance in the year 2020, the defaulted loan recovery rate from top 20 defaulters by Sonali, Janata, Agrani and Rupali was 0.8 per cent, 4.52 per cent, 6.74 per cent and 2.10 per cent respectively.

SCBs each year sign with the BB memorandums of understanding in which different key performance indicators, including recovery of loans from their top defaulters, are set as a KPI for the banks.

To get rid of the capital shortfall, the banks have urged the central bank to offer them rule relaxation so that they can show better balance sheets having adequate capital against their risk weighted assets.

An official of the BB said that top executives of the SCBs placed the demand at a meeting with the central bank on March 25.

The intention of the SCBs is not to follow international best practices related to accounting and such deviation may create a credibility crisis for other banks, the central bank official said.

Following the demand placed by them, BB governor Fazle Kabir instructed its department concerned to scrutinise if there is any scope for giving the policy relaxation to the SCBs, the official said.

The four banks, which are suffering from defaulted loans worth Tk 42,273 crore that represents 47.88 per cent of the total non-performing loans in the banking sector, also faced Tk 12,212.63 crore in capital shortfall in the year 2020, showed the BB report placed before the meeting.

The banks have been going through a state of poor capital base for several years amid irregularities and mismanagement.

In the report, the central bank mentioned several irregularities in the banks.

The irregularities include non-creation of loans against borrowers even after adjustment of export development fund liability of the borrowers by the central bank from the bank’s account.

Deferred letter of credit payment was made from the NOSTRO account but no forced or demand loan was created, the BB report said, adding that the payment was settled later by a new project loan.

One of the state-owned banks paid import bills of 11 clients without creating any forced or demand loan against the clients.

In terms of recovery from top 20 defaulters, Sonali Bank was the worst performer among the four banks.

Against the Sonali Bank’s target of Tk 350 crore in loan recovery from the top 20 defaulters, the bank recovered only Tk 2.81 crore from them in the year 2020.

The Rupali Bank’s recovery was the second lowest as the bank managed to recover only Tk 5.24 crore from its top defaulters in the past year.

Janata Bank managed to recover Tk 45.19 crore from its top 20 defaulters against its target of Tk 1,000 crore in loan recovery from the borrowers in the year.

Agrani Bank recovered Tk 13.48 crore from its top 20 defaulters while the bank was asked to recover Tk 200 crore in defaulted loans from the borrowers.

The BB report also showed that the banks’ loans were significantly concentrated in a very few branches.