Matir Moina and 50 years of independence 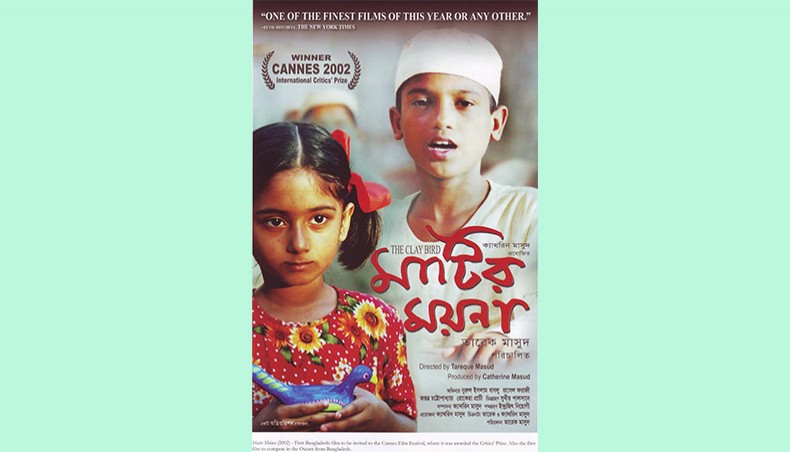 Tareque Masud’s Matir Moina was released in 2002. The movie depicts the ideological tension that persisted everywhere among people from all walks of life. On the fiftieth anniversary of our independence, Md Mashiur Rahaman reviews the film in the present context

TAREQUE Masud’s masterpiece Matir Moina (The Clay Bird) is one of the most debated Bangladeshi movies of the twenty-first century. The qawmi Islamists protested against the movie’s depiction of Islamic schools. They did so because their existence is depended upon the ‘qawm’ that unquestionably believe the way they explain and teach Islam. The film enthusiasts received the movie with a great appraisal that the Bangladeshi films are reaching world standards.

The film depicted the dimensions of the relationship between spouses in a neo-fanatic Muslim family, where everything that pleasures and cures is taboo. It also depicted the ideological tension that persisted everywhere among people from all walks of life. Even in the madrasa where the child protagonist of the film Anu studies, the tension is evident. The tension is evident inside the friend circle of Milon, Anu’s uncle and Kazi’s brother.

When the nation is celebrating its 50th anniversary of independence, we have some things to seriously look at through the eyes of the clay birds. As the kind of tensions that were evident before the war of independence did not get resolved at all, rather took so many turns some of which are immensely perverted.

In the movie, we see that Anu, the neo-fanatic Muslim Kazi’s son who was sent to madrasa so that he can be saved from non-Islamic cultural influences, brings a clay bird for his sister when he visits his family on the Eid vacation. Anu’s sister, Asma — who eventually dies from some kind of fever despite all her mother’s effort and seemingly because Kazi did not want his daughter to go through allopathic medicine — assured Anu that she would hide the clay bird from where even Anu would not be able to find it as Anu warned her that their father could get angry if he finds out the clay bird.

The tension reaches its symbolic peak in this scene. Some can argue that it is the last scene where the tension reached its peak, but if we watch the movie through a filter of current national scenario, we would feel that the encounter of Anu, Asma, the clay bird and Kazi is the scene where we felt most anxious and immediately felt relief that nothing bad happened. But that is a false sense of relief as bad things happened in the context of the movie, and in the context of Bangladesh throughout the country’s fifty years of independence.

The people like Kazi are plenty in Bangladesh who uprooted themselves from the soil of this land. Who does not belong to this culture and feels that everything, even the sunlight of this country is contaminated with their opposite ideology. Before independence, it was only true for the people who belonged to the neo-fanatic Muslim category, but in the meantime, it is true for a completely new group of people, the neo-fanatic so-called progressives who are leaned towards the upper echelon of the country’s power structure.

The hint was given in the movie. It was given by one of Milon’s friend who pointed out that all the isms we cherish are foreign, originated outside of the subcontinent. He also hinted the way out from the problem, but probably none of us did pay hid to it. When he was asked what about Islam, as the religion is also not originated from this land, he replied ‘I think the Islam of this land grew in this land. The preachers of Islam in this land and the people who believe in the religion creatively interpreted the religion that does not go against the culture and sunlight of the land. One of the teachers at the madrasa who is called Ibrahim hujur, also believed so.

In the current socio-political and cultural situation of the country, we have to gather the singular most important message from the movie. Those of us, who are against everything that goes against the spirit of our liberation war, must understand that liberation war was against all sorts of fanaticism, even the fanaticism against the Muslims or anyone who belongs to any religion or who does not belong to any religion. It was about tolerating all sorts of ideologies that loves the sunlight of this land, and about recovering the historically and culturally uprooted self. We must understand that to revolt is to humanise, and permanently end all the processes of dehumanisation, and not to express mere anger that can negate our very existence from the deep inside.

Mashiur Rahman is a contributor to the New Age Youth team.