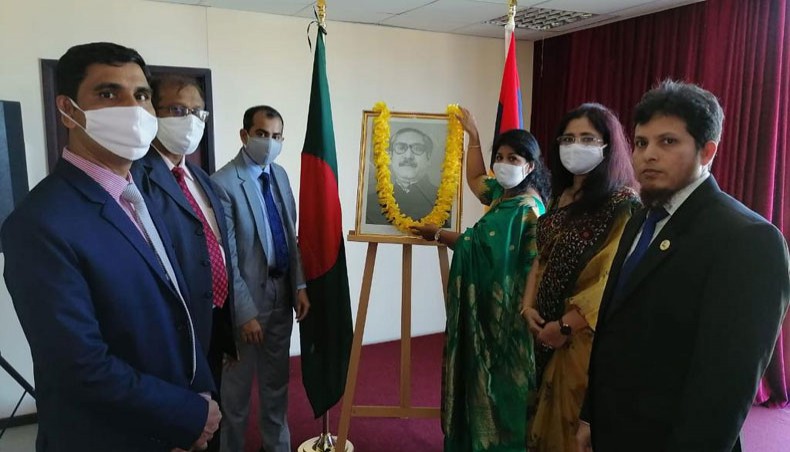 Bangladesh high commissioner to Mauritius Rezina Ahmed, along with mission officials, offers a garland of flower of the portrait photograph of Sheikh Mujibur Rahman, the founding president of Bangladesh, on the premises of the high commission marking the golden jubilee  of Bangladesh independence on Friday. — Press Release

The Bangladesh High Commission in Mauritius celebrated the golden jubilee of Bangladesh independence with due fervour and solemnity on Friday.

An in-house programme was arranged on the mission premises maintaining COVID-19 protocol, said a press release.

After COVID-19 re-emerged locally in Mauritius, resulting in announcing a lockdown from March 10, 2021 to March 31, 2021, the scheduled programme of the high commission was postponed.

All the arrangements for organising the event were made at the Caudan Arts Centre, where the president of Mauritius, Prithvirajsing Roopun, and prime minister Pravind Kumar Jugnauth along with more than two hundred guests were supposed to be present.

To commemorate the day, high commissioner Rezina Ahmed along with mission officials hoisted the national flag and laid a garland of flowers on the photo of Sheikh Mujibur Rahman, the founding president of Bangladesh.

During the programme, the messages by the president, prime minister, foreign minister and state minister for foreign affairs of Bangladesh were read out by the counsellor and first secretary.