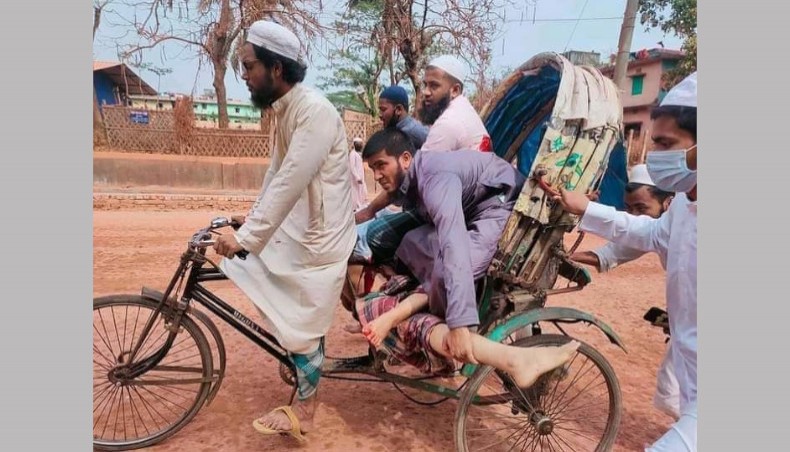 Fellows take an injured anti-Modi protester to a hospital in Chattogram after a clash between the police and Hefazat-e-Islam activists in Hathazri area of Chattogram on Friday. — New Age Photo

At least four people were killed and several others were injured in a clash between Hefazat-e-Islam activists and police in Hathazri area of Bangladesh port city, Chattogram, on Friday.

Hefazat-e-Islam activists took to the streets protesting at the arrival of Narendra Modi, prime minister of India. Modi is now in Dhaka on a two-day visit to join the celebrations of the golden jubilee of Bangladesh independence and the birth centenary of Sheikh Mujibur Rahman.

Jahirul said that eight persons, who sustained bullet injuries at the clash, were rushed to the hospital where duty doctors declared four dead.

The clash broke out at about 2:00pm when the Hefazat activists launched a demonstration in the area and vandalised Hathazari police station protesting at Indian prime minister Narendra Modi’s visit to Bangladesh, said Shahadat Hossain, additional superintendent of Chattogram district police.

Hefazat-e-Islam Ameer Junaid Babunagari came to Chattogram Medical College Hospital at about 5:00pm to visit the injured and deceased ones. He stayed at the hospital for one and half an hours.

While Hefazat Ameer Junaid Babunagari tried to leave the hospital after visiting the victims at about 6.30pm, Hafazat activists present there cordoned the car, blocked his road and chanted slogans demanding justice for the deceased.

At about 7:00pm, Hafazat activists forced Junaid Babunagari to get down from the car to stay with them at the hospital.