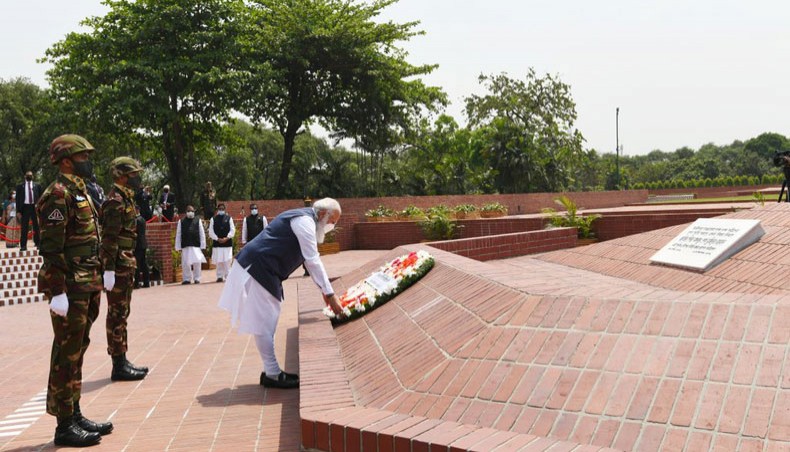 Indian prime minister Narendra Modi offers a wreath at the altar of the National Memorial in Savar on Friday. — New Age Photo

Indian prime minister Narendra Modi on Friday urged the next generations to take inspiration from the sacrifice and valour of the martyrs of Bangladesh’s 1971 War of Independence.

‘Their valour will continue to inspire future generations to fight injustice and defend the cause of righteousness,’ the Indian PM said in a statement written in the visitors’ book at the National Martyrs’ Memorial at Savar in Dhaka.

Modi paid his tribute to the martyrs of Bangladesh as their glorious sacrifices enabled the birth of a great nation in Bangladesh.

He emphasised for every visitor to the memorial to honour the sacred memory of the millions who were slain but not silenced.

The Indian PM prayed, in written form, that the eternal flame at Savar remains a lasting reminder of the noble victory of truth and courage over deceit and oppression.

Modi planted a sapling at the memorial complex as a mark of respect to the valorous martyrs of Bangladesh.

Narendra Modi reached Bangladesh on Friday morning on a two-day official visit to join the celebrations of the golden jubilee of Bangladesh’s independence, the establishment of bilateral relations and the birth centenary of the country’s founding president Sheikh Mujibur Rahman.

After returning from Savar, Modi extended audience to a group of eminent Bangladeshi young achievers, including cricketers Mashrafe Bin Mortaza MP and Shakib Al Hasan, at Hotel Sonargaon in the capital.

He also talked to a delegation of Jatia Party, which is also a partner of the ruling Awami League-led alliance, and a group of Indian diaspora at the hotel.

The Indian PM is set to address a select gathering at the national parade ground as a part of the celebrations Friday afternoon.

Modi will also visit the Bangabandhu Museum at Dhanmondi in the capital, two temples, one each in Satkhira and Gopalganj, the birthplace and the grave of Sheikh Mujibur Rahman at Tungipara in Gopalganj during the tour.

He will join an official talk with Hasina at her office on Saturday.