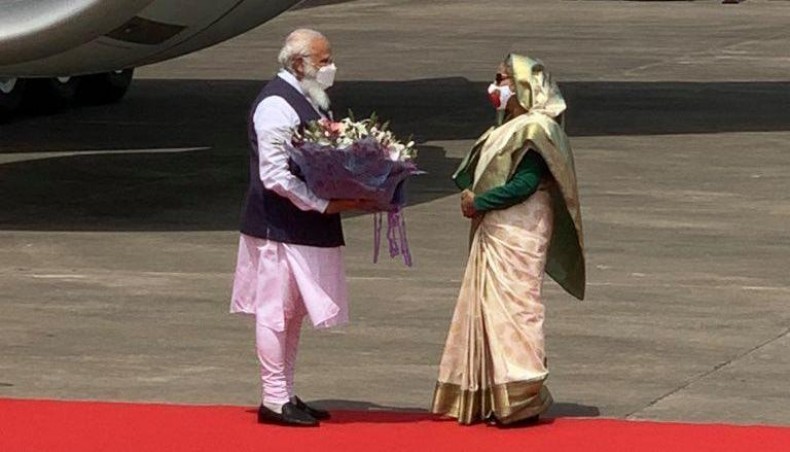 Indian prime minister Narendra Modi reached Bangladesh on Friday morning on a two-day official visit to join the celebrations of the golden jubilee of Bangladesh’s independence, the establishment of bilateral relations and the birth centenary of the country’s founding president Sheikh Mujibur Rahman.

Modi will visit the National Martyrs’ Memorial in Savar, on the outskirts of Dhaka, the Bangabandhu Musuem at Dhanmondi in the capital, two temples, one each in Satkhira and Gopalganj, and the birthplace and the grave of Sheikh Mujibur Rahman at Tungipara in Gopalganj during the tour.

He will join an official meeting with Hasina at her office on Saturday.

Regional connectivity, removal of barriers to trade, sharing of water of trans-boundary rivers, stopping of border killing by the Indian Border Security Force and cooperation in energy and defence sectors were likely to get prominence in the official talks between prime minister Sheikh Hasina and her Indian counterpart, Modi, on Saturday, Bangladesh government officials said.

Four memorandums of understanding were likely to be signed between the two countries on Saturday with both sides downplaying the signing of the instruments emphasising the celebration parts of the visit, Bangladesh officials said.

The deals are likely to be signed in the areas of trade facilitation, disaster management and cooperation between the national cadet corps and the national defence colleges of the two counties.

Hasina and Modi will inaugurate Swadhinata Sarak between Mujibnagar and Kolkata, Bangabandhu-Bapu Museum with exhibits of Sheikh Mujib and India’s Mahatma Gandhi and a monument on Indian martyrs of Bangladesh’s 1971 liberation war.

India will confer the Gandhi Peace Prize 2020 on Sheikh Mujib during the visit.

India is likely to conduct a token transfer of 109 ambulances to Bangladesh in the tour.

Modi is set to leave Dhaka on Saturday.

It will be his second visit to Bangladesh.