Source of Rohingya camp fire yet to be identified 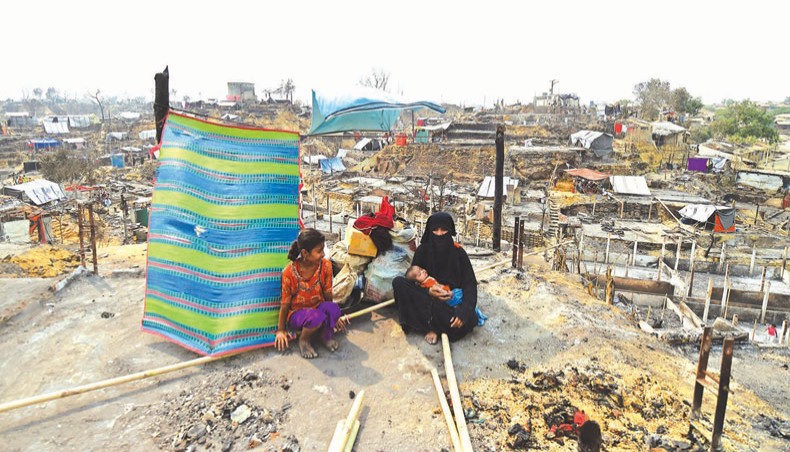 A woman sits with a child amid the temporary shelters set up for displaced Rohingyas days after a fire at a refugee camp in Ukhia of Cox’s Bazar on Wednesday in which fifteen people died and 400 residents were missing. — AFP photo

Two separate committees on Wednesday launched their inquiries into the Wednesday’s devastating fire that swept through five camps in Ukhia of Cox’s Bazar killing at least 11 Rohingyas while the home minister, Asaduzzaman Khan, said Bhashan Char Island was ready to receive the affected population based on their willingness.

The inquiry committees were still working to determine the reason behind the  fire which destroyed 9,000 shelters, two field hospitals, 136 learning centres and displacing over 45,000 people.

‘We are on the field, trying to determine the source or cause of the fire. But we are not yet sure about the source of fire,’ said the Refugee Relief and Repatriation Commissioner, Shah Rezwan Hayat, who is leading an eight-member high power inquiry committee.

The United Nations, aid groups and Rohingya leaders said that the fences erected by the Bangladesh authorities hampered rescue work and caused injuries during Monday’s 12-hour blaze in the densely populated makeshift facilities built with bamboo and tarpaulin.

‘Rescue efforts proved to be challenging as a result of the presence of perimeter fencing,’ a joint statement from the United Nations, local and international aid agencies said.

On Wednesday, Phil Robertson, the deputy Asia director at Human Rights Watch said, ‘The Bangladesh government’s unwelcome fencing of refugee camps in Cox’s Bazar resulted in the deaths of refugees who could not flee the flames. These fences should be taken down!’

The Fire Service and Civil Defence headquarters formed another four-member committee led by its operations department director Zillur Rahman and the committee was on the field to determine the source of fire and estimate the losses.

During the time of fire fighting, the armed police battalion members deployed in the camps detained eight youths and handed them over to the Ukhia police station.

Chattogram police range deputy inspector general Anwar Hossain told New Age that the youths were interrogated and no direct involvement of these youth were found in setting the fire. They were sent to the jail following a court order.

Locals detained them as valuables were being snatched during the fire, he said, adding, ‘We, however, continued our investigation into the fire.’

After visiting the affected Rohingya, the home minister, Asaduzzaman Khan, said the two inquiry committees were working to determine the cause or to find out whether there was any negligence on the part of any one or any ill motive that led to the fire.

Talking to reporters, the minister said that Bhashanchar Island with better and beautiful accommodations was ‘ready’ for the Rohingyas who are willingly to be relocated.

‘If they are willing to go then we will take them there soon,’ he told reporters while leaving one of the affected camps.

The minister was flown in the morning with senior officials and attended a relief distribution programme in the camp.

According to the disaster management and relief minister, as of Wednesday evening, the fire left 11 dead while 45,000 people including some Bangladeshi affected, 9,300 shelters burned, 136 learning centres and two hospitals were destroyed.

The UNHCR, the United Nations Refugee Agency, based on their provisional reports, however, said, ‘15 refugees were confirmed to have tragically lost their lives in the fire.’

The government said none went missing following the fire. All the eleven were buried shortly after their death, the officials said.

Mohammad Shamsud Douza, additional commissioner of the Refugee Relief and Repatriation Commissioner, told New Age on Wednesday that the affected people who left the camps following the fire incident started returning to their respective camp areas and are now staying at makeshift tents while they were provided free meals.

Many were given bamboo and tarpaulins to rebuild their facilities.

The Rohingyas were suffering from the crisis of food, drinking water and shelters while many were waiting under the open sky and expecting to rebuild their sheds.

Ayesa Begum, 25, of Balukhali camp No-8 returned her burnt shed and waited for a new shed.

`I lost my seven-year-old girl in the fire. I saved myself but my child was lost,’ she lamented.

`We are suffering as there are no food, drinking water and shelter,’ she said, adding, `We have lost everything, even clothes.’

Noor Banu, another affected Rohingya, also told the New Age that the devastating fire had robbed her of everything and they do not even have clothes to wear.

Sheila Grudem, a senior emergency coordinator for World Food Proramme in Cox’s Bazar, said despite the challenges, they were rapidly deploying food assistance in a large part of the camp area sourcing from national retailers to local hotels and restaurants and their humanitarian partners on the ground.

Bangladesh Red Crescent Society stated that hundreds of their trained volunteers and staff members were working relentlessly to clear the area of debris and in setting up tents for the affected in the largest camp in Cox’s Bazar.

International aid agency Action Against Hunger said that the fire in Balukhali destroyed hundreds of water points and sanitation facilities and they started an intensive recovery activity so that the affected households can have immediate access to clean water.

World leaders and international agencies, among others, continued expressing their sympathy towards the affected people.

António Guterres, the United Nations secretary general, on his Twitter said ‘I am shocked and saddened by the deadly fire in the Cox’s Bazar refugee camp in Bangladesh. My solidarity with the tens of thousands affected by this tragedy and my thanks to everyone on the ground — including UN teams — assisting them.’

Camps at Cox’s Bazar currently shelter over 8,70,000 Rohingyas while the majority of the displaced people, some 720,000, arrived in 2017, fleeing violence in Myanmar’s Rakhine state.

The fire damaged partly or entirely the makeshift houses at five camps — camp-8 east and camp-8 west, as well as camp-8, camp-9, camp-10 and camp-11 — which formerly housed 40,000 Rohingyas, in the dumpy Balukhali area of Ukhia.

International Organisation for Migration, meanwhile, has pledged $1 million from its emergency fund to the relief efforts after the Rohingya camps fire and it said further $20 million is required to respond to the most urgent needs.