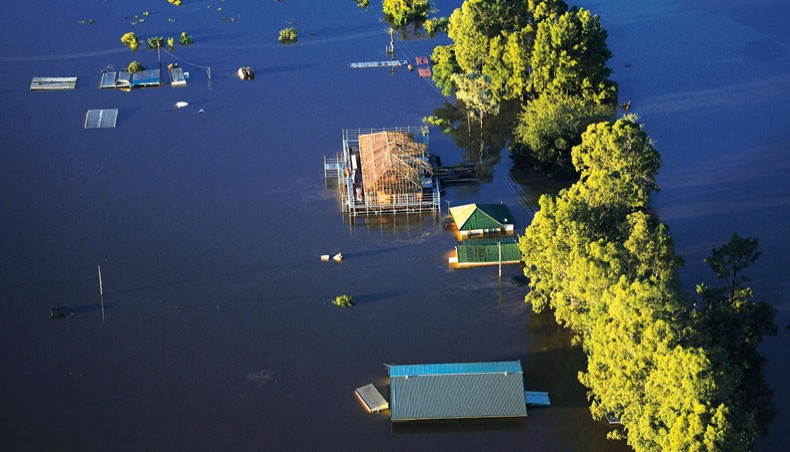 A photo shows flood damages in the Windsor and Pitt Town areas along the Hawkesbury River area of Greater Sydney on Wednesday. — AFP photo

Rescue teams delivered food and emergency supplies to Australians isolated by floodwaters on Wednesday as authorities warned that swollen rivers posed an on-going threat despite blue skies over the east coast following days of torrential rain.

Relentless downpours over the past week have caused ‘catastrophic’ flooding in Australia’s most populous state, New South Wales, with parts of suburban northwest Sydney still under water.

It was a ‘miracle’ no one had died in the worst flooding for some regions in a century, state premier Gladys Berejiklian said, as sunshine brought welcome relief and some sodden residents began turning to clean-up efforts.

Tens of thousands have fled their homes in recent days, and thousands more remained on evacuation alert with water levels on some rivers not expected to recede until Saturday.

Emergency services have also responded to more than 11,000 calls for help in recent days, rescuing at least 950 people from floodwaters.

But officials said rescue boats were shifting their focus to delivering food and essential supplies to residents cut off by flooding, bolstering efforts that began in areas close to Sydney on Tuesday.

Ailsa Jones said there was a ‘crazy’ lack of supplies in Wheeny Creek, northwest of the city, with no essentials available in supermarkets since Sunday.

‘We’re just on spaghetti and 2-minute noodles. I’m rationing the kids out just to make sure that it lasts.’

Thousands are still without power and energy providers have warned electricity will not be restored in the worst-affected areas until later in the week.

Wild weather and flooding also hit outback areas of New South Wales on Tuesday and even extended into built-up parts of Queensland state to the north.

‘We’re certainly not out of the woods in terms of the immediate flood danger, but we have to turn our minds to how we start the clean-up and the recovery,’ Berejiklian said.

The government said hundreds of troops would be deployed from Thursday to support the efforts.

‘Their job will be out there cleaning up, making sure that we get rid of the debris... making it easier for those who are going through the recovery process,’ emergency management minister David Littleproud said.

Thousands of homes and businesses have been damaged, with insurers receiving almost 12,000 claims and many more expected.

Some coastal regions have received a metre of water in a week, the equivalent of two-thirds of normal annual rainfall.

Many are still reeling from a prolonged drought and unprecedented bushfires just over a year ago.

Scientists have warned Australia can expect more frequent and more extreme weather events as a result of climate change.

The rain and floods have also delayed the already halting rollout of coronavirus vaccines in Sydney and surrounding areas.