Thank the left for the right 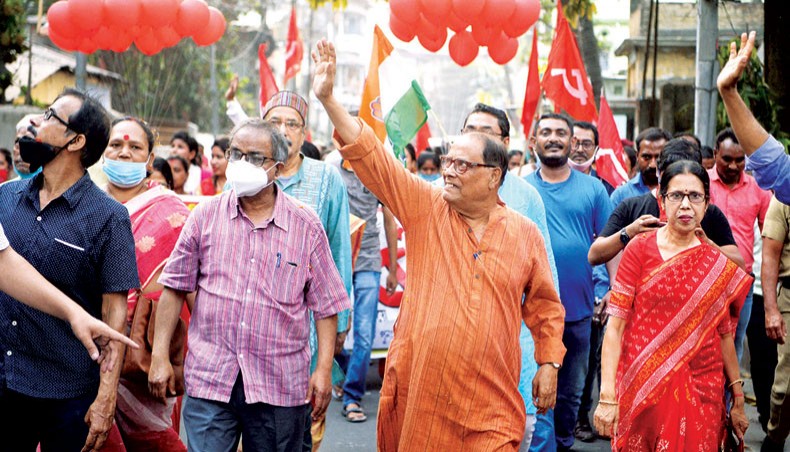 Communist Party of India (Marxist) candidate supported by Indian National Congress for the Siliguri Assembly constituency waves during a door to door campaign in Siliguri on March 20. — Agence France-Presse/Diptendu Dutta

TRUTH be told, now that the left has lost its moorings, it’s mainly the right wing that calls the shots in South Asia. Who is lending hope to the fight against prime minister Narendra Modi in India? Believe it or not, it’s the hard-line Hindu right Shiv Sena. Who is the head of the opposition alliance in Pakistan against prime minister Imran Khan? Maulana Fazlur Rehman, the man who opposed the women’s protection bill among his other regressive assertions. What is common between the two? Both supplanted the left in street power, both have become powerful right-wing spearheads for coalitions involving the left and liberal forces, one for the Muslim right, the other for the Hindu right.

Who has allowed both to grow? The left-supported Pakistan Peoples Party in Pakistan and the left-supported Congress in India are to blame. In fact, the Congress created the Shiv Sena as a caste-based Maratha force to break the leftist trade unions headed by Marxist Brahmins. The irony is that the left is a fragmented force in India. So, who does one look to for succour against the onslaughts on democracy by prime minister Modi and his fascist cohorts?

While the street power to combat Modi comes from the Shiv Sena — and efforts are on to dislodge its government in Maharashtra — the main intellectual firepower comes from right-wing ideologues. We have to count our blessings that former BJP minister Arun Shourie has picked up the cudgels on behalf of Indian democracy. Look how important it could be for West Bengal chief minister Mamata Banerjee that former BJP minister Yashwant Sinha has joined her party to take on the might of Modi’s party.

There are examples even within the robust farmers’ movement. The khap panchayats that have come together to challenge Modi are the ones that colluded with him in 2014 and 2019 to bring him to power. These village communities are also socially regressive, particularly with regard to women’s rights, not unlike the mullahs who are part of the opposition’s moves to challenge Khan’s government.

Much has been said in recent days about the resignation of Pratap Bhanu Mehta, a well-regarded academic from a premier university. He has cited pressure against his steady criticism of Modi’s assault on democracy as the reason for his exit.

The Caravan magazine did a survey of some ideologically floating intellectuals who began by supporting Modi but have since become his critics. Prior to the 2014 general election, Mehta was busy deflecting concerns for the future of Indian democracy in the event that Modi became prime minister, says the Caravan’s survey.

As early as December 2012, after Modi secured a fresh term as chief minister of Gujarat, Mehta published a piece titled ‘A Modi-fied politics’. In it, he backed the politician’s eligibility for national leadership, and addressed the persistent criticism of Modi for having watched over anti-Muslim pogroms in his state in 2002, soon after he first took charge of it. ‘You can look at the convictions of Modi’s cabinet colleagues and point to those as proxy proof of his culpability,’ Mehta wrote.

Among those colleagues was Maya Kodnani, Gujarat’s minister for women and child development until 2009, who was later given a life sentence for organising a massacre in 2002. (The Gujarat High Court granted bail to Kodnani in 2014, shortly after Modi became prime minister, and acquitted her last year.) But, Mehta, says the survey, added: ‘You can also look at them and wonder why so many Congress cabinet ministers still have not been made to answer for 1984’ — when Congress leaders led anti-Sikh pogroms in Delhi. ‘The point is not to use 1984 to politically exonerate Modi. The point is that it is hard to attack evil when we so widely condone it in other contexts.’

This was a roundabout way, according to Caravan, of saying what Modi’s defenders have always said when confronted with his bloody legacy — that all those who point it out are Congress minions. Mehta wrote that ‘those worried about Modi need to set their own house in order’, and that ‘attacks on him have a self-incriminating quality’. The apparent suggestion, according to the survey, was that it was best not to criticise Modi at all. This approach also ignored the fact that Modi’s critics included people who had long condemned the Congress’s evasion of responsibility for 1984.

The magazine quotes a number of other intellectuals who switched sides. One counts this as a blessing when the largest left party has taken leave of its senses to oppose Mamata Banerjee. It sees her as a legitimate target with the Bharatiya Janata Party if not worse.

There is intellectual wrangling between the Communist Party of India (Marxist) and the Communist Party of India (Marxist–Leninist) Liberation about the strategy in West Bengal. The CPI-ML has opposed the CPI-M’s decision to fight Mamata Banerjee. The two communist parties had been together in the Bihar fray with Lalu Yadav, and they did quite well for themselves as a united opposition to the BJP. At one point the CPI-M and Mehta seem to speak in a similar voice. ‘We are not on the high tide of fascism,’ Mehta reassured his readers not too long ago. ‘It is more about a complicated country feeling its way through difficult times, fed up with old power structures. The “F” word has become a substitute for real thinking.’

In August 2014, Ashutosh Varshney, an Indian professor at Brown University, hailed Modi for being ‘pragmatic’ rather than dogmatic on Hindu nationalism. Varshney, who has since changed his position, conceded, according to Caravan’s survey of intellectuals switching sides, that the Rashtriya Swayamsevak Sangh ‘will get personnel representation, especially in the party and in cultural and educational institutions’, but, he reassured readers, so long as Modi maintained his authority ‘it will not be able to dictate larger policy, economic or cultural’. It’s become difficult to tell the left, liberal and right from each other.