The big picture is ignored in COVID-19 debate 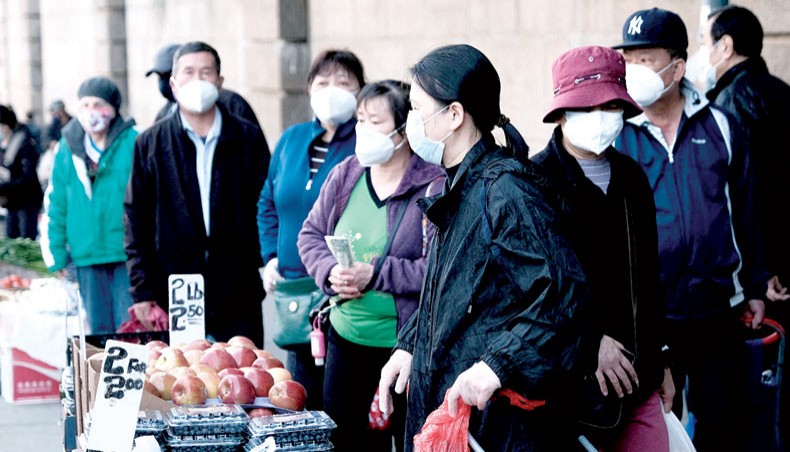 WHAT is the ‘big picture’ of COVID-19, alias SARS-CoV-2? Is it what we could also call the ‘end game’, or what Aldous Huxley called the ‘brave new world’ in his science-fiction novel of the same name — gradually turning into reality in the form of the UN Agenda 2030 — with the implementing tool the Agenda ID2020 created by Bill Gates?

We are at the beginning of the end game. We are in what the 2010 Rockefeller Report calls ‘The Lockstep’ scenario. This is the first one of four scenarios, prompted by an invisible enemy, a virus, a coronavirus, akin to the one that was at the origin of the SARS outbreak in China in 2002 to 2004. This virus is to be propagated as a huge deadly danger. It’s a brainwashing fear campaign. The decision for the launch was taken during Event 201, in New York City on October 18, 2019, a few weeks before the actual SARS-CoV-2 outbreak. And it was confirmed by the World Economic Forum’s conference in January 2020 in Davos, Switzerland.

Event 201, hosted by the Bill and Melinda Gates Foundation, the Johns Hopkins School of Medicine (funded and created by the Rockefeller Foundation) and the WEF, was chiefly a computer simulation of a SARS-like pandemic, killing some 65 million people in 18 months and destroying the world’s economy as we know it.

What was foreseen was a bio-warfare against humanity. The virus was called SARS-CoV-2, later it was renamed by the World Health Organisation to COVID-19. The close companion of the virus was fear — weaponised fear.

Together, with a huge propaganda and brainwashing effort, the entire world — 193 UN member countries were called a COVID-19 risk — and the WHO declared a pandemic — as we later found out, it was a plandemic — on March 11, 2020. Imagine! With only about 4,600 ‘cases’ worldwide, the WHO called it a pandemic. The world fell in shock. When people are in shock, they are gullible to accept anything.

A worldwide lockdown was ordered by an invisible globalist cabal to all 193 UN member governments at once, by mid-March 2020. Governments were bought, corrupted, co-opted or threatened into behaving as ordered by a worldwide common must-narrative. The entire UN system was, and is as of today, part and parcel of this worldwide fraud. Indeed, those government leaders, who did not follow the narrative, who defied the plandemic, risked severe ‘punishment’.

The president of Burundi, Pierre Nkurunziza, died unexpectedly on June 8, 2020, shortly before the official end of his term. He was the longest-ruling president in Burundian history. His death was diagnosed as a heart attack. He was known for defying the official narrative of COVID-19, and of kicking the WHO out of his country shortly before his death.

Tanzania’s popular president John Magufuli, died on March 17, 2021, from ‘heart complications’, in a hospital in Dar es Salaam. Magufuli was one of Africa’s most prominent coronavirus sceptics. He called for prayers and herbal-infused steam therapy to counter the virus. Shortly before his death, he said that he had PCR tests carried out on a papaya and a goat and the tests came back positive, implying that the notorious PCR test kits were pre-tainted with the virus.

People at large are being kept in the dark about what the deep state, the corporate, banking and high-tech communication oligarchs, or simply the globalist cabal’s real plan is behind the COVID-19 fraud.

The so far almost invisible big picture, also called the ‘great reset’, or in the UN Agenda 2030 jargon, ‘Build Back Better’ — consists of a threefold objective:

— Taking over total control of humanity, as in a ‘One World Order’, by electromagnetic manipulation (that’s where 5G, later 6G come in), by digitising everything, including all money, and by converting humans into transhumans. Klaus Schwab, the co-author of the great reset, and his cabal, call it the 4th Industrial Revolution;

— Shifting assets and resources from the middle and the bottom of society to the top few; and,

— Drastically reducing the world population, via a massive eugenist depopulation agenda. Eventually, a small globalist elite — all those associated with managing and governing the tyranny — plus a relatively small world population of serfs — or what Aldous Huxley called the ‘Epsilon people’ (the lowest cast working people) — in today’s world, ‘transhumans’, would survive. The serfs or Epsilon people would all be electronically controlled and manipulated, so they would not transgress into seeking their erstwhile freedom lost.

Bill Gates is today’s chief proponent of a reduced world population. He has also recently become the largest private farmland owner in the United States. He reportedly owns 242,000 acres of farmland across 18 states. What does he intend to do with this farmland? Well, who controls the food, controls the people. Gates is also a significant shareholder and partner in (Bayer-)Monsanto’s genetically modified seeds and pesticides branch.

At this point we can only speculate. But some of the not so far-fetched speculations would indicate that Bill Gates, under the guise of environmental protection (ie, the good old ‘climate change agenda’) and the New Green Deal, may want to produce synthetic food, laboratory produced meat and genetically modified grains and vegetables. This synthetic and modified food, spiked with toxic pesticides, will then compete with ‘real food’ which — under the neoliberal market forces will become ever rarer — affordable only by the elite.

Synthetic food may include all kinds of ‘health and disease agents’ to regulate the population. The Epsilon people will, of course, have no clue. As the great reset concludes, they will own nothing and be happy.

While this is going on in the shadows, invisible for most people, the media make sure that the debate — official by governments, and unofficial by anti-COVID-19 protesters — is entirely focused on COVID-19, the infection, the invisible atrocious enemy, the fear-mongering, plus all the repressive COVID-19-measures, masking, social distancing, semi- and/or full lockdowns, travel restrictions, vaxxing or not vaxxing, and the so-called obligatory electronic vaccination passports, akin to the Agenda ID2020.

All are concentrating on the COVID-19 virus. Almost nothing lets you suspect that there is a big picture. A much larger, much deadlier agenda behind all this that the virus and the atrocious fear promote, and it is but an instrument to reach the larger objectives, those listed above.

Hardly does any public or unofficial debate, even massive anti-COVID-19 measure protests, like the ‘Wake up the World’ demo by the World Freedom Alliance in Copenhagen on February 4, 2021, touch the big picture, what awaits us at the end of the UN Agenda 2030: you own nothing and are happy.

We are at war. Not just against an invisible enemy, the coronavirus and the weaponised factor of fear, but also against our own ignorance and unconsciousness. Plus, against the global cabal — the WEF and its great reset with its treacherous, fake New Green Deal, a new ultra-neoliberal capitalism, painted green — intent on swallowing us all.

The British prime minister Boris Johnson on October 8, 2020 addressed via video his conservative Tory Party with these words:

‘We have lost too much, mourned too long and life cannot continue like before. History shows us that events of this dimension — wars, pandemics — don’t just come and go. Most often they are triggers for social and economic changes. We see these instances as a period to learn and to become better. Hence, this government wants to “build back better.”’

Let’s compare this with the words of Klaus Schwab in his COVID-19 — The Great Reset:

‘Many of us ask when will we return to normality? The short answer is NEVER. Nothing will return to the rotten feeling of normality that existed before the crisis, because the corona-pandemic marks a fundamental change in our global development. Many analysts call it a crossroads, others a crisis of biblical dimensions, but in essence this shows us that the world we still knew in the first months of 2020 doesn’t exist anymore. It dissolved in the context of the pandemic.’

Wow! This is strong and quite insensitive language for the many people who died of COVID-19 and especially for those hundreds of millions, if not billions, who have lost everything — their jobs, their homes, their income, their families and friends, those who suffer from famine, who now live in misery, at the edge of sheer existence, those who are driven to commit suicide.

The grandiose WEF, the Rockefellers, Gates, prince Charles, the director general of the WHO, the chief of the International Monetary Fund, the UN secretary general, and all those who participated in the planning of this ‘pandemic’ during Event 201, never mention these people. In other words, for the small elite, for the planners and organisers of the great reset, these dumped-into-poverty ‘Epsilon people’ are dispensable.

If we cannot master the COVID-19 fraud, put an end to it, even unseating and bringing to justice the 193 lying, cheating and eventually murderous UN member governments, how can we come to grips with, and escape the fangs of, the ‘big picture’, the great reset, that eventually will deprive us of our daily nutrition, rendering us infertile and sterile with toxic artificial food with the forced vaccines, and bring about a mass genocide through genome-altering mRNA-type vaccines, pesticides, and genetically modified synthetic food — with a soulless, masked life in solitude?

DissidentVoice.org, March 23. Peter Koenig is an economist and geopolitical analyst. He is also a research associate of the Centre for Research on Globalisation.