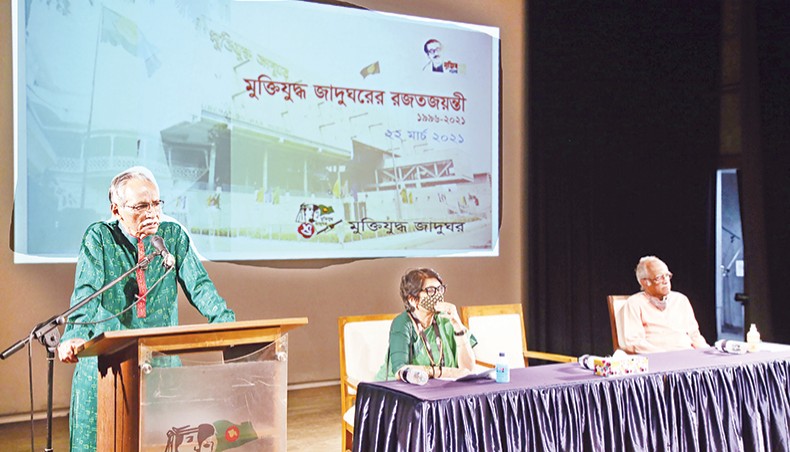 Liberation War Museum celebrated its 25th founding anniversary organising a programme at its auditorium on Monday.

Liberation War Museum member secretary Sara Zaker and members of the board of trustees Sarwar Ali and Mofidul Hoque spoke at the event.

‘The Liberation War Museum started its journey at a rented house in Segunbagicha. Today, the museum is celebrating its 25th founding anniversary. It is both a matter of joy and sorrow. Sorrow, because our fellows and members of the board of trustees — poet-architect Rabiul Hussain, Tariq Ali and Aly Zaker —passed away,’ said Sarwar Ali.

‘The families of the martyrs of the War of Independence have donated memorabilia, rare paper cuttings to the Liberation War Museum. As a result, just as the victory in the war of independence was made possible through people’s participation, the museum has also become a place for the people and by the people,’ added Sarwar Ali, who also added that the purpose of the museum is to present the real history of the war of independence to the next generation.

‘In this glorious moment of history of the country, we gratefully remember the contributions of the people. Because, their participation, unconditional love and support are the key to our success. They are behind the establishment of the museum and the gradual transformation that has taken place over the years,’ said Sara Zaker adding, ‘That is why we say, it is a public organisation. The museum had to close its doors on the eve of its founding anniversary in 2020, shortly after the world was hit by the COVID-19 pandemic. We reopened the museum on January 8, 2021.’

Besides, Sara Zaker presented the annual report of the museum at the programme.

Dipesh Chakrabarty, a historian of considerable global fame, discussed the independence movements in the Indian subcontinent, besides mentioning that inter-religious cooperation that everyone talked about, did not exist.

Touching on some crucial historical moments of the pre- and post-independence India, Dipesh Chakrabarty said that the flags proposed by many acknowledged the presence of the Hindus and the Buddhists while the Muslims and the Sikhs were excluded.

‘I felt very honoured to be a part of this programme. I still consider myself a learner while trying to tackle complex issues relating to Bangladesh’s history. This country has gone through a lot of bloody events, sacrifice and hard work. It is a matter of pride for any Bangla-speaking person today that there is a country in the world where 98 per cent of the people speak Bangla. As this country came to existence, a great leader was able to deliver his speech in Bangla at the United Nations,’ said Dipesh Chakrabarty.

Following the discussion programme, a cultural programme was held. Swati Sarkar rendered Tagore songs while artistes from Dhrupad Kalakendra performed a dance recital under the direction of Shukla Sarkar.

The programme was also streamed live on the museum’s Facebook page.