The first summit of the Quad took place 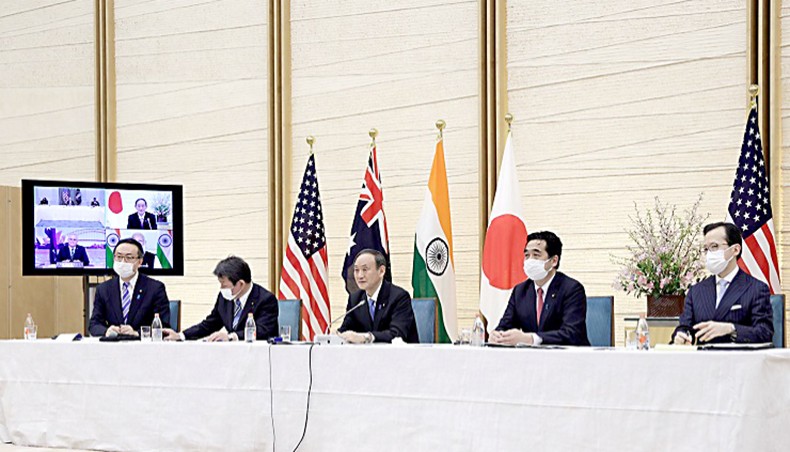 THE first summit of the so-called ‘Quad’ countries, including the United States, Japan, India, and Australia, held on March 12 this year, certainly belongs to the events of paramount importance of the current stage of the ‘great world game’. Because this configuration is seen by its initiator, the United States, as the ‘leaven’ of the process of forming a full-fledged politico-military organisation aimed at solving approximately the same tasks, which during the entire Cold War was performed by the North Atlantic Treaty Organisation.

At that time, the latter was engaged in deterring the main geopolitical opponent in the form of the USSR. The future ‘Asian NATO,’ the base of which, according to the plan, should be the Quadrilateral Security Dialogue, or Quad, is also intended to solve the problem of deterrence. But a new ‘major source of global threats’ emerges in the form of China. Every member of the Quad is pointing the finger at it, with varying degrees of frankness, when they have to answer the question of ‘why all this is happening’.

Having been in amnesia most of the time since its inception (in 2007), since late 2019 the Quad project has begun to show signs of life and increasingly provides grounds for discussion when analysing the current state of world politics. It is hardly an exaggeration to say that the fate of this project becomes one of its key questions.

The New Eastern Outlook regularly addresses the subject of the Quad, most recently in connection with the February 18 conference of foreign ministers of the participating countries. Its main results include the emerging signs of the institutionalisation of this configuration. This is about making ministerial meetings regular. The first notable joint activity of the Quad was the Malabar Joint Naval Exercise in September 2020, which since the early 1990s has been primarily a bilateral US-Indian format.

And yet, a sign that the Quad is aiming for something more than the current forum was the decision in principle of the penultimate ministerial meeting in Tokyo (October 6, 2020) to hold the first summit of the participating countries. Its exact date, March 12, had been announced in a telephone conversation three days earlier between the prime ministers of India and Japan.

First of all, let us pay attention to the very fact of another contact between the leaders of two of the four members of the Quad. This fits in with the general trend of Japanese-Indian rapprochement that has been evident for a long time, but has clearly surfaced politically since the government of the Bharatiya Janata Party in India led by current prime minister Narendra Modi came to power in 2014.

One of the main motives behind this process is determined by all the geopolitical content that is now invested in the word ‘China,’ which was also present in this conversation. Tokyo and New Delhi intend to counter China’s ‘challenge’, the reality of which, however, is not discussed and is taken for granted, both bilaterally and as part of the Quad.

During the aforementioned conversation between the leaders of India and Japan, this ‘challenge’ was signalled through a well-established meme that is invariably uttered in the course of various contacts between the participants in this configuration: ‘Freedom and openness in the Indo-Pacific Region’. It was also heard at the first summit of the Quadrilateral Security Dialogue.

The conversation between Narendra Modi and Yoshihide Suga also touched on defence and security as one of the main issues in the bilateral relationship. In this regard, let us draw attention to the (also telephone) conversation between defence ministers Rajnath Singh and Nobusuke Kishi on December 22 last year, during which the mentioned ‘sphere’ was discussed in more detail and specifically. In particular, as one of the evidences of its development, the fact of the above-mentioned Malabar exercise was noted.

The day after Narendra Modi and Yoshihide Suga set a date for the quartet’s video summit, the willingness to participate was announced on behalf of Australian prime minister Scott Morrison and US president Joe Biden.

The first thing to note from its results is the same observation that there are no visible signs (at least in the short term) of the emergence of a full-fledged politico-military configuration on a regional scale. So far, the efforts of the parties have focused mainly on the fight against China (and the Russian Federation) in the field of ‘vaccine diplomacy’. That is, the intention is to somehow correct the consequences of the failure in the fight against the SARS-CoV-2 pandemic, which the countries of the generalised west have evidently demonstrated.

The prioritisation of vaccine diplomacy by the Quad is understandable, for the consequences mentioned could have the most serious (today hardly completely foreseeable) political consequences. On the eve of the summit, concern was expressed about the growing influence of China and Russia in the Third World as a consequence of successes in combating the coronavirus pandemic. To parry this ‘threat’, it is proposed to rely on India, close to these countries. The scheme of actions that the members of the Quad intend to take in this case is presented in the Japanese The Yomiuri Shimbun.

Participants at the summit agreed to produce about one billion doses of coronavirus vaccine by the end of 2022. Overall, a commendable intention, yet leaving a sad impression of political ‘roach races’ on a highly inappropriate occasion. Is the world so screwed up that not even a dire warning (‘sent from somewhere’) in the form of SARS-CoV-2 can talk sense into it?

Another theme featured prominently at the Quad summit. The issue in question is the so-called ‘supply chain’ security problem in certain technological processes, which was initiated by the previous US administration. This most often refers to rare-earth metals (which play a key role in modern advanced technologies), in the supply of which China is almost an absolute monopoly on world markets.

Previous precedents of Beijing’s alleged threats to use a ‘rare-earth bomb’ are associated, in particular, with the period of aggravation of Sino-Japanese relations in the fall of 2012, when the Japanese government ‘bought back’ the disputed Senkaku/Diaoyu islands from a certain ‘owner’. China’s western opponents have also been wary of plans to modernise the entire rare-earth metal mining industry, which is now one of the main sources of environmental pollution, an extremely urgent problem for China.

But, again, the main result of the Quad summit was that it did not produce any tangible signs that something like an ‘Asian NATO’ will emerge in the foreseeable future. For now, the Quad is still what it was when it was born in late 2000s, namely, a forum for several leading IPR countries to discuss various topical regional issues. There are plenty of forums like this in the region (and in the world at large). More often than not, it does no harm for some group of politicians to get together and talk about a topic of interest.

Previously noted in the New Eastern Outlook, the serious differences in the approaches of the participants of the Quad to solving the fundamental issues of security in the region and the world as a whole clearly manifested themselves during the first summit of this configuration.

The author also attributes the doubtfulness of the above perspective to China’s increasing awareness of itself as a global power responsible for the positive course of the great world game. One indication of this responsibility is the recent efforts to ease (unnecessary) tensions with India over the local conflict in Ladakh. But perhaps the main such evidence is the increasingly clear desire of China to establish relations with the leader of the Quad, ie, the United States.

In this regard, prime minister Li Keqiang’s press conference on March 11, on the eve of his trip to Alaska, was quite remarkable. Although it is possible to assume that China’s elite (like all other countries) consists of different groups with divergent preferences in the field of foreign policy. In particular, with regard to its most important element concerning relations with the United States.

However, the state and near-term prospects of these relations under the new US administration deserve another round of focused study.

New Eastern Outlook, March 19. Vladimir Terehov is an expert on the issues of the Asia-Pacific region.