Thai demonstrators clash with police over demand for royal reforms 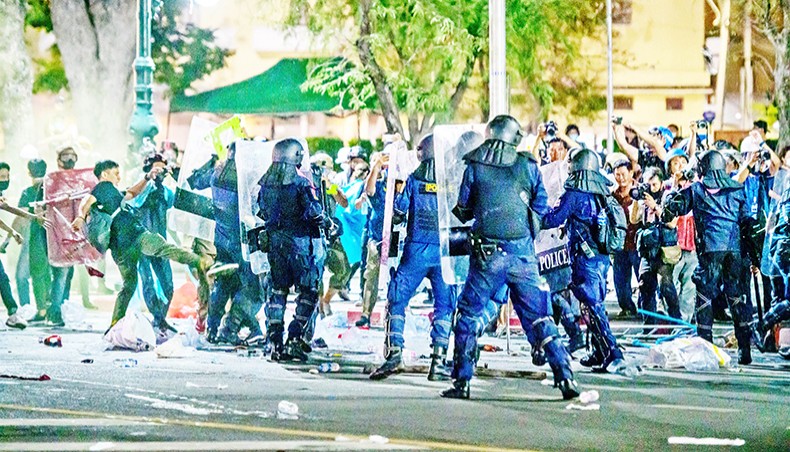 Riot police clash with pro-democracy protesters at an anti-government demonstration in Bangkok on Saturday. — AFP photo

Thai police used water cannon and rubber bullets outside Bangkok’s Grand Palace Saturday, after demonstrators broke through a barricade of shipping containers to demand reforms to the kingdom’s unassailable monarchy.

It was the latest night of unrest since Thailand’s pro-democracy movement kicked off in July, raising calls for an overhaul of premier Prayut Chan-O-Cha’s administration and a rewrite of a military-scripted constitution.

But their most controversial demands have been for reforms to the monarchy, including the abolition of draconian royal defamation laws.

A wall of cargo containers, two containers tall, had been erected in Sanam Luang, a historic field in front of the palace, to keep protesters away but, just an hour into the rally, they used ropes to yank some of the top-row boxes down, allowing a small opening.

‘You’re breaking the law!’ said the police over an announcer as protesters used ropes to pull the lower containers out of place.

Once protesters were able to get through, they threw Molotov cocktails at dozens of police who stood by with water cannon trucks about 100 metres away, using the jets to prevent protesters from coming closer.

‘Release our friends!’ protesters shouted, referring to prominent leaders who have been detained since earlier this year.

Police chased demonstrators away from the area, firing rubber bullets and tear gas, according to AFP reporters on the ground, as authorities announced they would start arresting people.

By 8.30pm (1330 GMT), most protesters had dispersed, with only hard-core activists still at the scene.

Before the stand-off, protester Am-Nawat Liangwattana said the use of shipping containers as barricades meant authorities were getting serious about ‘limiting our freedom of speech’.

‘But the more they confine us, the more we need to come out,’ she said.

Since the movement kicked off, more than 60 people have been charged under Thailand’s draconian royal defamation law, and a handful of the most prominent leaders have been detained.

The laws shield the ultra-powerful King Maha Vajiralongkorn and his family from defamation, but rights groups say their broad use means anything perceived as criticism can land a person in jail for up to 15 years per charge.

‘The next step is we will have experts examine the content to see whether if it is illegal,’ Police Major Trirong Prasopmongkol said.

‘This raid is related to the protest today because protesters said on social media that they will distribute these books.’

After the raid, protest group Redem posted the book’s e-copy, inviting demonstrators to download it and ‘read it out loud’ at the protest.

Local media said 3,000 police officers were deployed around the area.