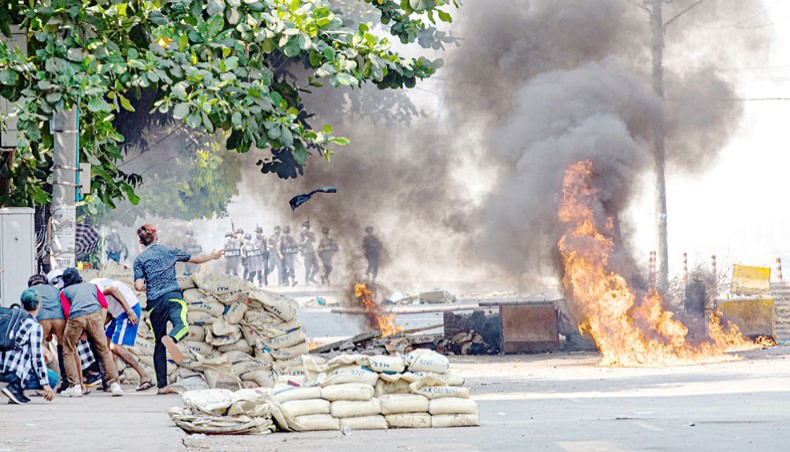 A protester, fifth from left, throws a projectile towards security forces as others shelter behind a barricade during a crackdown on protests against the military coup in Yangon on March 17. — Agence France-Presse/STR

AS IS common with US-backed colour revolutions around the globe, the western media will attempt to cover up opposition violence for as long as possible until shifting the narrative towards a ‘reluctant civil war’ in which opposition groups were ‘given no choice’ but to take up arms.

Of course, in every example — from Libya and Syria to Yemen and Ukraine — violence was part of US-backed political subversion from the beginning.

This is no different in the Southeast Asian state of Myanmar where US-backed protesters are in the streets fighting with Myanmar’s police and military.

The ‘activists say’ school of journalism

THE western media is once again relying on the ‘activists say’ method of reporting — absolving themselves from actual, objective and factual journalism and instead reporting on the conflict from the point of view of western-backed opposition groups who have every motivation to depict themselves as victims and Myanmar’s new government as being brutal and repressive.

Reports are based almost entirely on information from local media funded by the US government through the National Endowment for Democracy — outlets like The Irrawaddy, Mizzama, Democratic Voice of Burma, as well as ‘monitoring groups’ like the Assistance Association for Political Prisoners. A glance at any western media report will include at least one of these sources.

Far from journalists or actual monitoring groups — these are components of the opposition who have every motivation to relay a narrative that serves to advance their own political agenda rather than reporting the truth.

Similar ‘activists say’ reporting was used by the west for years during the Syrian conflict with the western media attempting to cover up opposition violence up to and including junctures where militants began operating tanks, artillery, and anti-tank missiles.

AS IN Syria and Ukraine — where western attempts to cover up violence and brutality among the opposition eventually gave way to the fact that both opposition groups were violent extremists — the truth about violence used by protesters in Myanmar is also beginning to emerge.

An article from the Bangkok Post titled, ‘KNU vows protection for Karen protesting Myanmar coup,’ would admit that the Karen National Union — an armed group who has waged a bloody insurrection against Myanmar’s central government for decades — has vowed to ‘protect’ anti-government protesters.

Images of heavily armed militants travelling in convoys allegedly on their way to protest sites were circulating in media across Asia — but these reports are still being deliberately omitted from western media coverage.

Similar scenes had played out in Libya and Syria in 2011 — with the public’s confusion and genuine belief that the Libyan and Syrian governments were brutalising ‘peaceful protesters’ owed wholly to the western media’s deliberately misleading coverage.

US-funded fronts providing misinformation to the western media, and the western media’s reports themselves are being used to pressure the United Nations and the governments of countries around the globe to in turn put pressure on Myanmar and restore the US client regime of Aung San Suu Kyi to power.

Efforts by Myanmar’s new government to tell its side of the story have been hampered by US-based social media companies that have shut down official accounts of Myanmar’s military and government, as well as Myanmar state media services — leaving literally only opposition media’s accounts for the global public to read.

Agence France-Presse in its article, ‘Facebook shuts down Myanmar army “True News” page,’ would claim: ‘A Facebook page run by the Myanmar junta’s “True News” information service was kicked off the platform Sunday after the tech giant accused it of inciting violence.’

Revealing is Facebook’s inaction toward opposition groups, including the KNU, who are clearly armed and engaging in violence, and using the US-based social media giant to coordinate their activities within the country and to spread misinformation abroad.

CAREFULLY edited videos show only the moment security forces respond, with no context provided as to why Myanmar’s police and military are using force. A similar tactic is being used by US-backed protesters in neighbouring Thailand — however, the government and alternative media in Thailand have done a slightly better job showing the other side of the story — mainly to the Thai public and is likely one of several factors behind the protests finally fading there.

In the days, weeks, and months to come — if Myanmar’s government cannot manage this crisis and it continues to grow — the western media will find it increasingly difficult to ignore the armed, violent nature of the opposition — an opposition — supporters of Aung San Suu Kyi — the western media itself had noted were violently storming Rohingya communities in past years, killing locals and burning homes and businesses to the ground.

It is very unlikely that these same excessively violent opposition groups suddenly adopted peaceful protesting tactics since then — and even pictures in the media show them wearing body armour, holding shields, and in some cases advancing on the position of police and soldiers with clubs and metal rods — an act that would provoke violence from security forces anywhere in the world.

Evidence has already emerged that the opposition depicted as ‘peaceful protesters’ by the west are using violence and further evidence will eventually emerge of deadly violence that is prompting an escalation across the country.

With reports of militant groups already mobilising amid the protests — armed clashes are inevitable — and likely are already taking place. But — just as in Libya and Syria — the western media will only report one side of the conflict for as long as possible — and alternative media, including state media from non-western nations appear to have no presence in Myanmar and are instead — unfortunately — merely repeating western reports — reports these alternative news sources should know better than to trust. US-backed regime change succeeding anywhere emboldens it everywhere.

If more voices are not raised with regards to Myanmar, demanding both sides of the story be told — the nation risks falling victim to the same chaos that consumed nations targeted by the United States elsewhere — with the possibility of the violence and instability crossing over the border into Thailand and beyond.