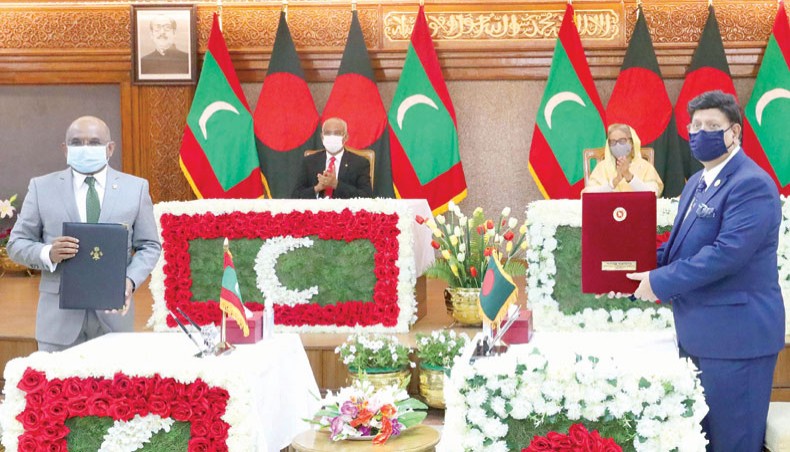 Bangladesh and Maldives on Thursday reached a consensus to strengthen connectivity by establishing direct commercial shipping and air links and sign a preferential trade agreement aimed at increasing trade between the two countries.

The two countries also signed four memorandums of understanding to boost cooperation in different areas including fisheries and cultural affairs.

The agreements were reached at talks at the level of the heads of the  governments of the two sides — Maldivian president Ibrahim Mohamed Solih and prime minister Sheikh Hasina — at the Prime Minister’s Office in Dhaka.

Foreign ministers of the two countries — Abdulla Shahid of Maldives and AK Abdul Momen of Bangladesh — briefed journalists about the outcome of the talks.

The two top leaders decided to establish a direct commercial shipping link between Male, the capital and seaport of Maldives, and the three seaports of Bangladesh by signing a shipping agreement.

The four MOUs signed between the two countries, after the talks, were on setting up of a foreign minister-level joint commission for comprehensive cooperation, launching an annual bilateral foreign office consultation at the level of foreign secretaries, cooperation in the field of fisheries and pelagic fishing and on a cultural exchange programme for 2022-2025.

President Solih and prime minister Hasina witnessed the signing of the MOUs, PM’s press secretary Ihsanul Karim said in a briefing after the talks, according to Bangladesh Sangbad Sangstha.

Both the countries agreed to hold regular commerce secretary-level meeting to negotiate PTA and expedite the finalisation of the proposed agreement on customs cooperation and signing an agreement on avoidance of double taxation.

Bangladesh iterated its policy of extending continued support towards the development of human resources in the Maldives in different fields including higher education in medicine and dentistry.

‘Bangladesh is a potential trade partner of the Maldives and the PTA will be signed in the near future,’ Karim said, quoting the Maldivian president.

On the Rohingya issue, president Solih said that his country wants to work jointly with Bangladesh at the International Courts Justice to protect the rights of the Rohingyas.

Solih appreciated significant contributions made by Bangladeshi expatriate workers in the two economies.

Sheikh Hasina called upon the Maldives to import various products from Bangladesh to address the bilateral trade issues in details.

The two countries also agreed to work together for maintaining peace in the Indian Ocean region, he said.

Solih was set to join a reception hosted in his honour by president Abdul Hamid at Bangabhaban.

Maldivian president Solih reached Dhaka on Wednesday morning to attend the celebrations of the birth centenary of Bangladesh’s founding president Sheikh Mujibur Rahman and the golden jubilee of the country’s independence.

He was set to leave Dhaka for Male on early Friday.