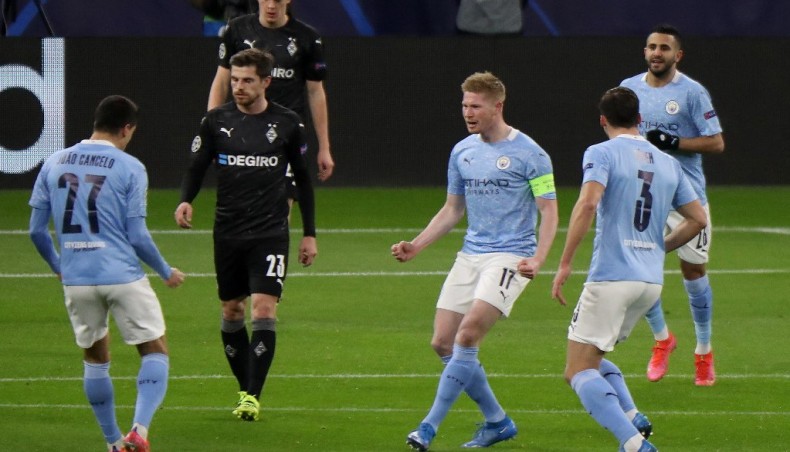 Manchester City midfielder Kevin De Bruyne (C) celebrates after scoring his team’s opening goal against Borussia Monchengladbach during their UEFA Champions League round of 16 second-leg match at the Puskas Arena in Budapest on Tuesday. — AFP photo

Manchester City cruised into the quarter-finals of the Champions League as early goals from Kevin De Bruyne and Ilkay Gundogan beat Borussia Moenchengladbach 2-0 in Budapest on Tuesday and sealed a 4-0 aggregate victory.

The Champions League is the one trophy that has remained elusive to Pep Guardiola during his five years in Manchester with City failing to ever get beyond the last eight under the Catalan.

But the runaway Premier League leaders will get the chance to break that barrier next month as they showed why they are the bookies' favourites for the competition with another classy performance in the Hungarian capital.

De Bruyne and Gundogan were two of a host of first-team regulars left out by Guardiola for Saturday's 3-0 win at Fulham and City looked refreshed as a fast start guaranteed a 24th win in their last 25 games in all competitions.

Phil Foden had already forced Yann Sommer into a fine save low to his right before De Bruyne blasted in the opener off the underside of the bar on 12 minutes.

Six minutes later a flowing move from back to front saw Foden release Gundogan in behind the Gladbach defence to score his 15th goal of the season.

The Germans have now lost all seven games since manager Marco Rose announced he will be leaving the club at the end of the season to join Borussia Dortmund.

Gladbach did at least pose more of a threat than in the first leg as Ederson was stretched to save Marcus Thuram's deflected effort before the break.

Defensive frailties have been the cause of City's previous Champions League exits under Guardiola.

They conceded six goals to Monaco over two legs in 2017, five to Liverpool a year later, four to Tottenham in 2019, and suffered a shock 3-1 defeat to Lyon last season in a one-off tie in Lisbon.

However, the signing of Ruben Dias has transformed Guardiola's men into the complete team this season as they remain on course for an unprecedented quadruple of Premier League, Champions League, FA Cup and League Cup.

With no key players missing through injury, the wealth of options Guardiola has to choose from is another reason this could finally be City's year for a major breakthrough in Europe.

Fernandinho, Oleksandr Zinchenko, Aymeric Laporte, Sergio Aguero and Raheem Sterling were all introduced off the bench in the second half to give Dias, Joao Cancelo, Gundogan, Rodrigo and Bernardo Silva an early night ahead of Saturday's trip to Everton in the FA Cup quarter-finals.

By then, City will know their opponents in the last eight of the Champions League. On this form, they are the side to avoid in Friday's quarter-final draw.