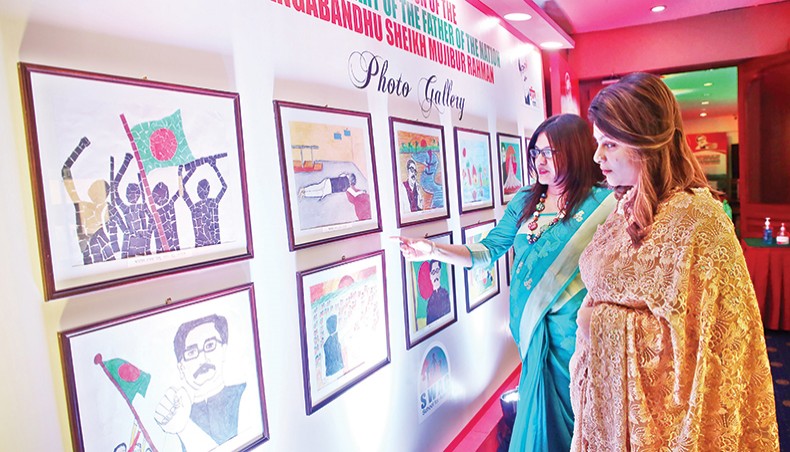 Visitors look at paintings by children with autism at a programme held at Pan Pacific Sonargaon Dhaka on Tuesday. — Sony Ramany

The programme was organised by AB bank in association with Society for the Welfare of Autistic Children marking Mujib birth centenary.

Besides, chairman of Society for the Welfare of Autistic Children Subarna Chakma was present as guest at the event, which was presided over by the president and managing director of AB Bank Tarique Afzal.

‘We arranged the programme to celebrate the birth centenary of country’s founding president Sheikh Mujibur Rahman. I hope such programmes will encourage children with autism to pursue art and cultural practices and boost their mental and physical development. We believe that if we properly nurture them, they too will become accomplished citizens,’ said Muhammad A (Rumee) Ali.

‘Society for the Welfare of Autistic Children began its journey in 2003 with the aim to provide much needed care for children with autism. We regularly arrange cultural programmes featuring participation of such children. I thank AB bank for supporting us in our journey,’ said Subarna Chakma.

The event featured an exhibition titled Bangabandhu, Pataka O Bangladesh. Paintings by 15 children on subjects namely the War of Independence, Sheikh Mujibur Rahman and others were displayed at the event.

The best paintings were awarded at the programme. Arijit Chakma received the first prize, Rihan Ali received the second prize and Marjuk received the third prize.