Int’l consensus not possible without internal one 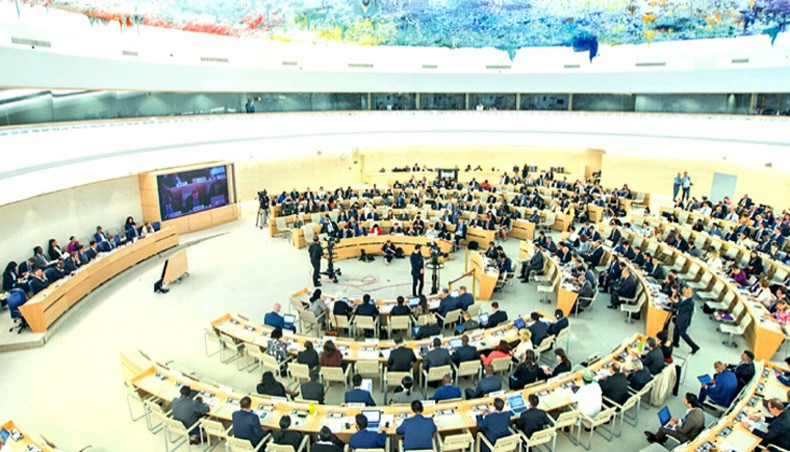 The UNHRC in session. — Daily News

A BOOK titled Geneva Crisis: The Way Forward compiled by the Ambassadors’ Forum of Sri Lanka was launched at the foreign ministry. The inspiration behind the book was Sarath Wijesinghe, PC and former ambassador to Israel. The collection of articles, interviews and speeches represents a wide range of views, which gives a holistic view of the problem which is what ambassador Wijesinghe sought to do. He said the book was conceptualised as a solution to the entire future of the Geneva issue, not as a temporary measure to address the upcoming UNHRC resolution. Foreign minister Dinesh Gunawardena and foreign secretary Jayanath Colombage participated at this event. This suggests that within the government there is an appreciation of the importance of different perspectives as befits a plural, multi ethnic, multi religious and multilingual country.

When Sri Lanka withdrew from the previous UNHRC resolution in February last year, foreign minister Gunawardena was bold enough to say that Sri Lanka was indeed such a country and that the government cared about it very much. At this book launch, minister Gunawardena affirmed Sri Lanka’s commitment to uphold democratic principles. Commenting on the UNHRC resolution, the minister further stated that the priority must be given to every human being of the world at present, in view of the prevailing pandemic situation. He added that targeting certain countries should not be a priority of the world at present. Minister Dinesh Gunawardena has been optimistic that support of member countries of the UNHRC will be turning in Sri Lanka’s favour. However, it appears that the drafters of the resolution on Sri Lanka have strengthened their strictures and are getting more confident that they can prevail in a vote.

It is reported that none of the changes offered by Sri Lanka were accepted during the informal consultations and the wording has been tightened to give less room to manoeuver. Speaking at the launch of the book, foreign secretary Jayanath Colombage said that Sri Lanka would fight to protect its sovereignty, but there was no assurance that Sri Lanka would win the vote. Commenting on the book that was being release, the foreign secretary made the observation that it contained writings by him on the possibility of arriving at a consensus on the resolution, but now he was seeing a consensus among the drafters that excluded Sri Lanka. With the countries of Europe set to vote in favour of the resolution, Sri Lanka will need to rely on Asian and African countries if it wishes to obtain majority support within the member country of the UNHRC. But the better course of action would be for the government to obtain the support of all sections of its own people, and be able to be confident that they are united behind the government.

MOST countries, except for those with a political axe to grind or who believe in international human rights standards above all other considerations, would be sympathetic to Sri Lanka’s requests for support. Asian and African countries in particular who have been colonised by the western powers, and who have multi ethnic and multi religious populations to govern, will understand the problems of governance when faced with internal political competition and external big power pressures. For the average citizen or foreign visitor to Sri Lanka much has improved in comparison to the days of war. This sentiment was articulated by foreign secretary Colombage when he said that Sri Lanka was more peaceful than some of the countries that were sponsoring the resolution on Sri Lanka. This peace will be best preserved if the government’s decision-making is fair by all communities and taken consensually with all communities, just as foreign secretary Colombage was expecting from the international community.

In this context, when the government should be busy wooing allies in the Asian and African countries to support it, some unexpected actions of the government are going to make it more difficult to obtain such support. The sudden announcement that the government is proposing to ban the burka worn by Muslim women and to close down a thousand madrasahs which are Sunday Schools to the Muslim population has attracted worldwide attention. Instead of shutting so many down they need to be supported to fulfil whatever legitimate safeguards the government expects, such as to have their teaching syllabus and course materials vetted by non-partisan Muslim religious scholars who work for the state. On Saturday I received a phone call from Turkish National Television asking me about the proposed ban. This was even before most Sri Lankans knew about it. The journalist who called me sent me an international news report when I said I could not answer his questions as I did not know about the government’s proposals which had been made earlier that very day.

Many if not most of the Asian and African countries have Muslim majority populations and can hardly be happy with a country that is taking culturally and religiously severe actions against their co-religionists. This is especially true of the worldwide Muslim community where the bonds of brotherhood are extremely high. Only a few weeks ago, Sri Lanka overcame another cause for distress amongst Muslims by ending the enforced cremation of COVID-19 victims. This followed the pressures that came from the international community including from Pakistan and its iconic president Imran Khan who urged the government to be respectful of the religious right of the Muslim people to be buried. Most international reports give the fact that Sri Lanka refused to permit Muslims to bury their COVID-19 dead and is now banning the burka and along with it a thousand madrasahs, which gives the impression that there is anti-Muslim sentiment in the government.

It is puzzling as to why the government would choose this particular time to make the decision to ban the burka and close down madrasahs. The minister who is proposing the law has said that it is due to national security concerns. Indeed, the burka was banned in the immediate aftermath of the Easter bombing in April 2019. At that time even full face motor bicycle helmets were banned due to difficulties of identifying people. There would be no objections from right thinking people including the Muslim community if the wearers of burkas were obliged under law to show their faces to prove their identity in sensitive places such as when getting entry to government buildings. It may not be coincidence that the issue of national security should arise at this particular time when queries are being raised about the report of the Commission of Inquiry into the Easter bombing which has serious gaps in it especially in its failure to identify the possible masterminds behind the well planned and synchronised attack that took place.

ACCORDING to social media commentary, which demonstrates a cynicism that is new and seems to be fast spreading where the present government is concerned, the issue of the banning of the burka and the closing of the madrasahs will take the centre stage in the coming weeks and push out other embarrassments to the government such as multi-billion rupee sugar tax scam, the Easter Commission report and environmental pillage. But the costs to the country will be high. If approved by the cabinet of ministers, and subsequently by parliament, these laws will violate the cultural and religious freedom rights of the Muslim community. As the Muslim representatives in parliament are a minority, they will be likely to lose the vote in parliament unless non-Muslim parliamentarians decide to vote against the laws. The internal divisions within the country will grow either way. So far the ban is only a proposal and it needs to obtain the assent of both the cabinet and parliament where it may be reconsidered.

Unless the call for the ban on the burka and the proposal to close down a thousand Muslim madrasahs are reconsidered, the country may be called upon to pay a high price in the form of further loss of support internationally. The Muslim countries have traditionally supported Sri Lanka in international forums. Asian Muslim countries like Pakistan and Bangladesh have always been supportive of Sri Lanka. They will find it harder to be supportive of a country that is treating fellow Muslims harshly. Ironically, Sri Lanka will be finding itself in the company of some of the European countries that are so resolute in pursuing it on the basis that human rights violations took place during the war and in the post-war period. Several of the European countries which have faced Islamic terrorist attacks have also banned the burka on national security grounds. The banning countries include Austria, Denmark, France, Belgium, Luxembourg, Bulgaria, Latvia, Switzerland and the Netherlands. Non-European countries that have imposed bans include China, Cameroon, Chad, the Republic of the Congo, Gabon, Morocco, Tunisia, Algeria, Uzbekistan and Tajikistan.

The European country that has most recently banned the burka is Switzerland. It even conducted a referendum on the issue which passed with a 51 per cent majority. However, Switzerland’s parliament and the seven-member executive council (collective presidency) that constitutes the country’s federal government opposed the referendum proposal. They argued that full facial veils represented a ‘fringe phenomenon’, and instead proposed an initiative that would require people to lift their facial coverings when asked to confirm their identity to officials. What is admirable in Switzerland is that the country’s political leadership, even at the cost of their own personal popularity, stood up for liberal values that give respect to the cultures and beliefs of others so long as they do not intrude on to the rights of others. It is to be hoped that Sri Lanka’s political leaders will give that same leadership and assure to all citizens their equal rights to their cultures and to their religious beliefs. It is not enough for political leaders to say in words that everyone has equal rights but it must be so in their stances and practices also.