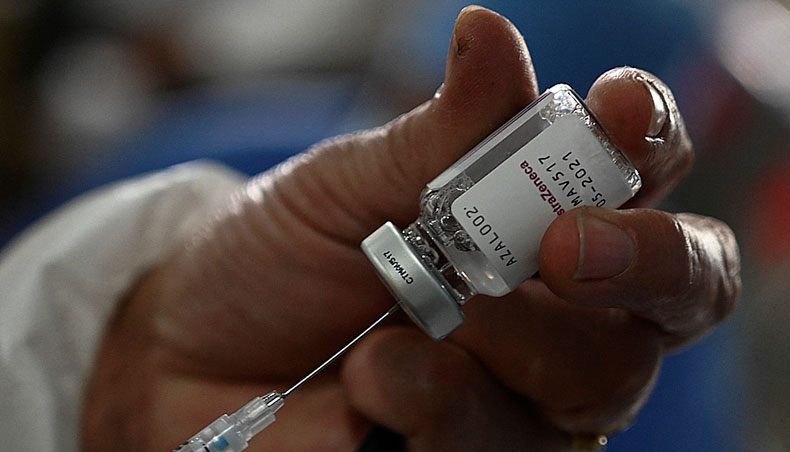 A nurse prepares an AstraZeneca vaccine against COVID-19 at the Alonso Suazo healthcare centre in Tegucigalpa, on March 15, 2021. — AFP photo

The European Union’s largest countries joined a stream of states halting their rollouts of AstraZeneca jabs on Monday over blood clot fears, as the World Health Organisation and Europe’s medicines watchdog insisted it was safe to use.

Both organisations will hold special meetings this week after a host of countries said they would stop using the vaccine pending further review.

The fresh suspensions were a major blow to a global immunisation campaign that experts hope will help end a pandemic that has already killed over 2.6 million people and decimated the global economy.

The three largest EU countries — Germany, Italy and France — all paused rollouts on Monday and were later joined by Spain, Portugal, Slovenia and Latvia.

The suspensions were not limited to Europe, with Indonesia also announcing a delay to its rollout of the jab, which is cheaper than its competitors and was billed as the vaccination of choice for poorer nations.

But the WHO insisted countries should keep using the vaccine, adding that it had scheduled a meeting of its experts on Tuesday to discuss the vaccine’s safety.

‘We do not want people to panic and we would, for the time being, recommend that countries continue vaccinating with AstraZeneca,’ WHO chief scientist Soumya Swaminathan said.

‘So far, we do not find an association between these events and the vaccine,’ she said, referring to reports of blood clots from several countries.

The European Medicines Agency, which is holding a special meeting on Thursday, echoed the WHO’s calls for calm and said it was better to get the vaccine than not.

‘The benefits of the AstraZeneca vaccine in preventing Covid-19, with its associated risk of hospitalisation and death, outweigh the risks of side effects,’ the agency said in a statement Monday.

The UK has doled out more than 11 million doses of the AstraZeneca jab — more than the entire EU — apparently without major problems.

She tweeted that she would continue to work virtually and the government added that she had ‘a low fever but no other symptoms and is generally feeling well’.

Italy provided another reminder that the pandemic was far from over – most of the country re-entered lockdown on Monday with schools, restaurants, shops and museums closed.

The streets of central Rome were quiet on Monday morning and businesses already battered by a year of anti-virus measures braced for another hit.

‘I’m staying open because I’m selling cigarettes, otherwise it would not be worth it,’ said Rome coffee shop owner Carlo Lucia, adding, ‘It’s just a waste of money.’

Meanwhile, intensive care doctors in Germany issued an urgent appeal for new restrictions to avoid a third wave as the British variant takes hold there.

More than 350 million vaccines have now been administered globally, but poorer countries are still lagging far behind.

Brazil, which has suffered one of the world’s worst outbreaks, is attempting to redress the balance, announcing the order of more than 138 million jabs on Monday.

The European Union has approved four jabs so far, and is monitoring others – including Russia’s Sputnik V vaccine.

The Russian developers said on Monday they had reached production agreements in key European countries.

The news came as the WHO said it had raised nearly $250 million in the past year from individual donors and companies towards battling the pandemic.

WHO chief Tedros Adhanom Ghebreyesus said the fund’s success proved ‘what we can accomplish together in times of need’.

More than a year after his organisation declared the coronavirus threat a pandemic, a much-anticipated report on the origins of COVID-19 is expected to be released this week.

The report follows a fact-finding mission of international experts assembled by the WHO, which travelled in January to the Chinese city of Wuhan where the virus first emerged in December 2019.

‘Within the next few years, we’re going to have real significant data on where this came from and how it emerged,’ said British zoologist Peter Daszak, one of the team members.