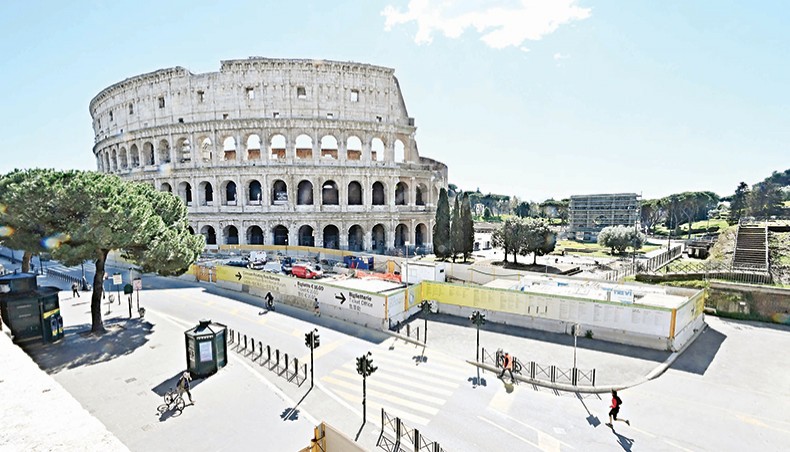 Streets are almost empty in front of the Ancient Colosseum in central Rome, on Monday, as three-quarters of Italians entered a strict lockdown with the government implementing restrictive measures to fight the rise of COVID-19 infections. — AFP photo

The novel coronavirus has killed at least 26,54,089 people since the outbreak emerged in China in December 2019, according to a tally from official sources compiled by AFP at 1100 GMT on Monday.

Based on latest reports, the countries with the most new deaths were Brazil with 1,127 new deaths, followed by United States with 571 and Russia with 404.

The country with the highest number of deaths compared to its population is Czech Republic with 218 fatalities per 1,00,000 inhabitants, followed by Belgium with 194, Slovenia 189, Britain 185 and Montenegro 180.

Coronavirus restrictions were reimposed across much of Italy on Monday, while Germany, Indonesia became the latest countries to suspend AstraZeneca’s COVID-19 shots over blood clot fears despite the firm and the WHO insisting there is no risk.

Ireland and the Netherlands stopped giving out the shot on Sunday, joining Denmark, Norway and Bulgaria.

Thailand abruptly delays the start of its rollout of the vaccine, joined by the Democratic Republic of Congo.

Germany on Monday halted the use of AstraZeneca’s coronavirus vaccine after reported blood clotting incidents in Europe, saying that a closer look was necessary.

AstraZeneca is one of just a handful of coronavirus vaccines being rolled out globally — and as one of the cheapest on the market is crucial to ensuring poorer countries have access to the jab.

Despite immunisation programmes gathering pace, surges in infections remain a threat, and Italian authorities reimposed restrictions on three quarters of the country until April 6 to suppress an outbreak fuelled by a COVID-19 variant first detected in Britain.

The streets of central Rome were quiet Monday morning as the new restrictions took hold, which were sure to further bruise businesses already battered by a year of anti-virus measures.

‘I didn’t expect it. We live from day to day,’ said barista Ana Cedeno as she prepared coffees for a few passers-by.

‘We have lost a lot of money, because our customers have no money.’

Schools, restaurants, shops and museums were closed from Monday, including in Rome and Milan, with residents told to stay home except for work, health or other essential reasons.

And while France was hoping to avoid another national lockdown, it was facing a hospital crisis with intensive care beds in the Paris region running out.

Meanwhile, intensive care doctors in Germany issued an urgent appeal for new restrictions to avoid a third wave as the British variant took hold in the country.

New data on Monday showed that tourism in the EU — measured in nights spent in visitor accommodation — plunged by 52 per cent last year compared to 2019, an unprecedented drop.

In some parts of the EU, however, there were signs of things easing up.

Nurseries, primary schools, salons and bookstores reopened on Monday in Portugal as it embarked on the first phase of peeling back anti-virus measures.

But the prime minister warned that reopenings must happen gradually.

‘We cannot take risks and lose everything,’ Antonio Costa said on Twitter.

As countries battle virus surges, health authorities in Italy and France have backed the COVID-19 vaccine developed by AstraZeneca and the University of Oxford, as several countries suspended use of the shot over fears it causes side effects such as blood clots.

But the World Health Organisation, Europe’s medicines watchdog, AstraZeneca and experts have stressed that the jab is safe and that there is no evidence linking it to the clots.

The AstraZeneca shot forms the bulk of doses being sent to poorer countries under the WHO-backed Covax scheme, which aims to ensure vaccines reach all parts of the world.

More than 350 million doses of the vaccine have been administered globally, but the majority have so far been given in richer countries, with Israel, the United States and Britain leading the pack.

The United States, the world’s worst-hit nation, has ramped up its vaccine campaign in recent days, after president Joe Biden promised a return to some form of normal by Independence day on July 4.

The US gave more than two million shots a day on average last week, according to data from the US Centres for Disease Control.