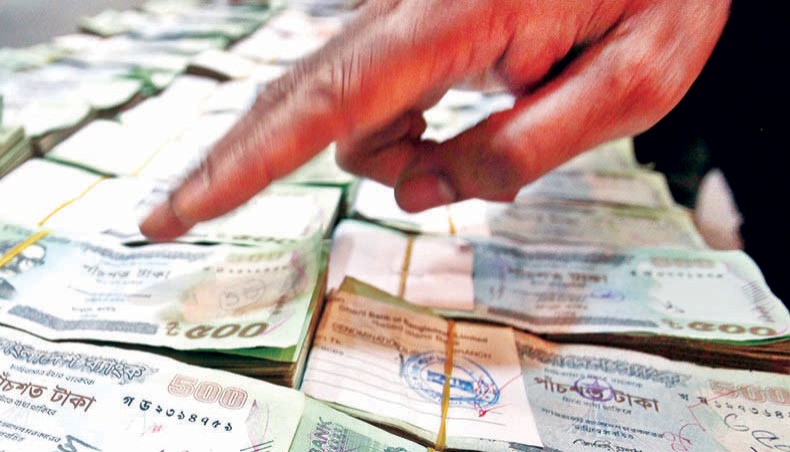 A file photo shows a man counting bundles of taka notes in Dhaka. The government’s borrowing from the banking sector turned negative in the July-February period of the current fiscal year 2020-2021 amid heavy sales of national savings certificates and low spending on implementation of the annual development programme amid the COVID-19 outbreak. — New Age photo

The government’s borrowing from the banking sector turned negative in the July-February period of the current fiscal year 2020-2021 amid heavy sales of national savings certificates and low spending on implementation of the annual development programme amid the COVID-19 outbreak.

Bangladesh Bank data showed that the government repaid Tk 11,940.23 crore in bank loans in the eight months of FY21.

For FY21, the government’s budgetary projection was to borrow Tk 84,980 crore from the banking sector for deficit financing.

The government’s record Tk 80,238 crore borrowing in the FY 2019-20 was the reason for setting high bank borrowing target, officials said.

The government also anticipated that NSC sales, another source for the government to borrow fund, would remain low, they said.

National Savings Directorate showed that the net sales of NSCs reached Tk 25,702.17 crore in July-January of the current fiscal year as investors found no other high-yielding investment product than the NSC.

Scheduled banks issued Tk 31,093 crore in credit to the government in the July-February period.

Banks are also suffering from excess liquidity due mainly to poor credit growth.

As of December 2020, banks were having Tk 2.04 lakh crore in excess liquidity.

Asked about the reason for the decline in the government’s bank borrowing, BB’s monetary policy department executive director Md Habibur Rahman told New Age, ‘It has happened due mainly to heavy buying of national savings certificates by people in the current fiscal year.’

He, however, said that the situation might change in the coming days as the government’s spending usually surges in the closing quarter of a fiscal year.

The implementation of annual development programme in the July-February period of FY21 dropped to a decade low.

Implementation Monitoring and Evaluation Division data showed that the government agencies were able to spend just 33.83 per cent of the allocation during the period.

The government have significant amount of deposit in its accounts even though the revenue collection situation is still remains dissatisfying.

The National Board of Revenue has recently downsized the revenue collection target to Tk 3.01 lakh crore for FY21 from the original target of Tk 3.30 lakh crore.