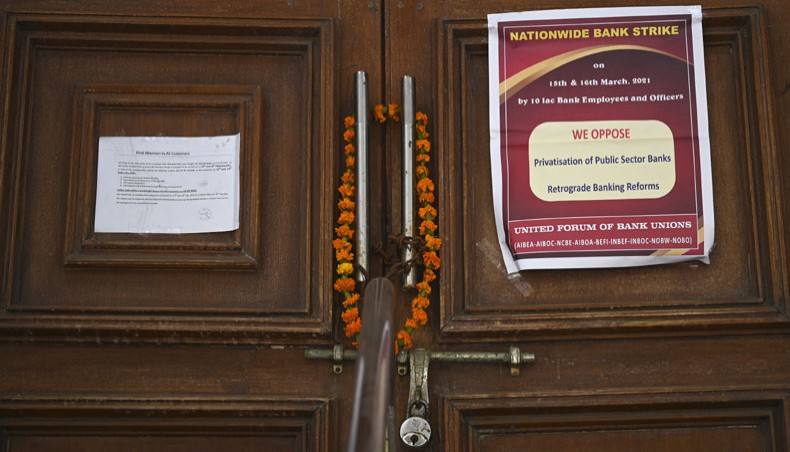 The entrance door of a closed bank is pictured during a two-day nationwide bank strike in New Delhi on March 15, 2021. — AFP photo

Operations of Indian state-owned banks were hugely disrupted on Monday after hundreds of thousands of workers went on a strike to protest the privatisation plans for two public banks, unions said.

Transactions worth more than $400 billion were affected in Maharashtra state, which includes the financial capital Mumbai, union leaders said.

Some state-owned banks closed, while others saw cash and clearing activities hit on the first of the two-day strike.

‘Right from the sweeper to the bank manager, we are seeing complete participation in this strike,’ said Devidas Tuljapurkar, convenor of the United Forum of Bank Unions, an umbrella body of nine unions that claims one million members.

The UFBU called the strike to protest the recent privatisation of IDBI Bank, as well as the plan to sell off two more public banks, as outlined by Finance Minister Nirmala Sitharaman.

Tuljapurkar said the government would be ‘handing over the hard-earned savings of the common man to corporates who have already duped the banking system so many times before’.

While many branches of State Bank of India, Bank of Baroda and Punjab National Bank were closed due to the strike, operations at private banks such as HDFC Bank and ICICI Bank were unaffected.