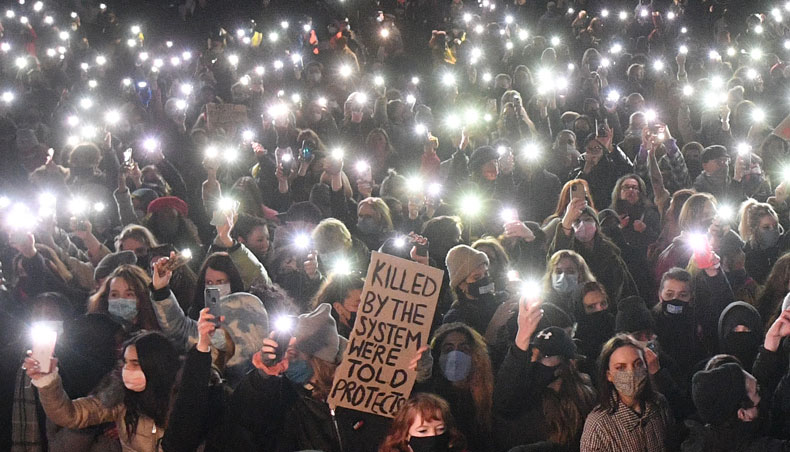 Well-wishers turn on their phone torches as they gather at a band-stand where a planned vigil in honour of alleged murder victim Sarah Everard was cancelled after police outlawed it due to COVID-19 restrictions, on Clapham Common, south London on March 13, 2021. — AFP photo

Britain’s prime minister vowed on Sunday to take action to better protect women after a national outpouring of grief and outrage over the death of a woman who went missing after setting out to walk home in London earlier this month.

Boris Johnson also promised several reviews into the policing of a vigil for the woman on Saturday night, after male officers were seen scuffling with and restraining female demonstrators – further souring the national mood.

Sarah Everard was found dead days after she went missing on March 3. A police officer was later charged with her kidnap and murder.

Reclaim These Streets, which organised the protest that was eventually banned because of coronavirus restrictions, condemned the actions of officers ‘physically manhandling women at a vigil against male violence’.

Johnson, who will hold a meeting of his crime and justice taskforce on Monday to discuss violence against women, said London’s police force and a watchdog would conduct separate reviews into the handling of the protest.

‘Like everyone who saw it I was deeply concerned about the footage from Clapham Common on Saturday night,’ he said, referring to the south London park where the protest took place.

London police chief Cressida Dick, who is facing calls to resign, told reporters her officers had been put in a ‘really invidious position’.

‘They moved to try to explain to people, to engage with people, to get people to disperse from this unlawful gathering and many, many, many people did. Unfortunately, a small minority did not,’ she said.

‘Hundreds of people were packed tightly together, posing a very real risk of easily transmitting COVID-19,’ she said.

Four arrests were made for public order offences and breaches of coronavirus regulations, the force said.

Everard’s disappearance and the huge search to find her has helped to focus attention on women’s safety in public places and the issue of male violence.

She had visited friends in Clapham and was returning home to Brixton, about 50 minutes’ walk away, when she disappeared.

Mourners once again gathered in Clapham on Sunday to pay their respects and call for change.

‘I felt compelled to come here today because it feels like all the women in my life have been really, really affected by Sarah’s death,’ 34-year-old Isabel told AFP, adding, ‘I feel like it’s a more conscious public awakening.’

But one of Everard’s friends on Sunday warned that her death had become ‘hijacked’.

‘I think my friend would have been unsettled at how her death has been politicised,’ Helena Edwards wrote in online magazine Spiked.