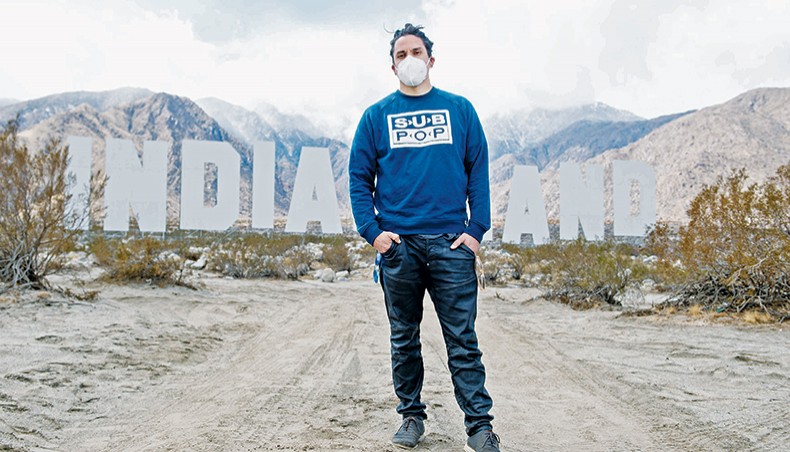 US artist Nicholas Galanino poses in front of his piece, ‘Never Forget,’ during the media preview day of the Desert X exhibit, in the Coachella Valley near Palm Springs, California, on March 11, 2021. — AFP photo

The giant, white letters standing astride a California mountainscape look a lot like the Hollywood sign, but their message could hardly be more different -- this is ‘Indian Land.’

The monumental work is part of Desert X, which Friday became one of the first large-scale art festivals to reopen in the pandemic, welcoming visitors to outdoor installations scattered across 40 miles (65 kilometers) of the Coachella Valley.

Indigenous Alaskan artist Nicholas Galanin placed his project ‘Never Forget’ at the entrance to Palm Springs -- a playground getaway long favored by movie stars -- as a reminder of Hollywood’s role in whitewashing US culture.

The 45-foot-high structure is identical in scale and material to the Los Angeles landmark, which originally spelled ‘Hollywoodland’ and was a 1923 ‘real-estate advertisement for white-only communities,’ he told AFP at Thursday’s preview.

‘The iconography of Hollywood, of the sign, the history of indigenous misrepresentation in media and movies plays a large role in the erasure of our communities,’ said Galanin.

‘Even the term ‘Indian’... was specific to indigenous people in America’s colonial experiences of mistitling and of removing our own place names.’

Galanin’s work directs visitors to a GoFundMe page aiming to raise $300,000 to restore Native American ownership of a plot of land in the mountains behind the sign, part of a broader ‘LandBack’ movement.

But even its presence in this patch of desert is remarkable at a time when few art projects are able to open, with museums in southern California still closed due to Covid-19.

Desert X co-curator Cesar Garcia-Alvarez said forging ahead was a ‘practical decision’ to support artists in ‘a year where everything got canceled,’ but admitted it was not easy despite the socially distanced setting.

‘Working remotely with artists, not being able to do as many site visits, delays in shipping because there’s so many things backed up, ensuring safety... but we did it!’ he said.

‘I’m glad we did because at some point we’re also going to have to pivot to what it means to experience art in this new world.

‘And I hope that this can be a case study in a way for other large-scale exhibitions.’

Founded in 2017, Desert X drew 400,000 visitors to its previous edition in the valley east of Los Angeles, and this time ‘health ambassadors’ have been hired to monitor face coverings and social distancing at peak hours.

Still, the exhibition was delayed by just over a month due to California’s severe winter Covid-19 spike.

Aside from Galanin’s, several other artworks sounded political notes, including a tall, thin section of wall that spikes incongruously out of the arid landscape, composed by Saudi artist Zahrah Al Ghamdi from 6,000 tiles containing local soils.

Visitors are encouraged to walk around the structure entitled ‘What Lies Behind the Walls,’ which draws links between her desert homeland and the California valley’s rugged landscape and architecture.

But the symbolism of a barrier so close to the US-Mexico frontier -- and devised during Donald Trump’s presidency -- is clear.

‘I definitely was inspired by what happened... there should never be walls in between people, in between countries,’ said Al Ghamdi.

‘I took it as a sign that I have to create a wall that shows our similarities and how we can join as a culture and not separate from each other.’

On the far side of the valley, Eduardo Sarabia’s arrow tip-shaped maze is constructed of traditional Mexican woven-palm rugs, used by travelers to rest during long journeys as far back as Aztec times.

‘Immigration... and the dialogue about Mexicans in general, with the last administration -- it was definitely a trigger,’ said US-Mexican Sarabia, whose mother made the perilous journey across the frontier.

Creating ‘The Passenger’ in a pandemic involved checking that the maze’s corridors were wide enough for visitors to socially distance, but ultimately the project was cleared to proceed with its original design.

‘To have something like this open during these complicated times, I felt really lucky,’ said Sarabia. ‘All my other exhibitions have been postponed.’