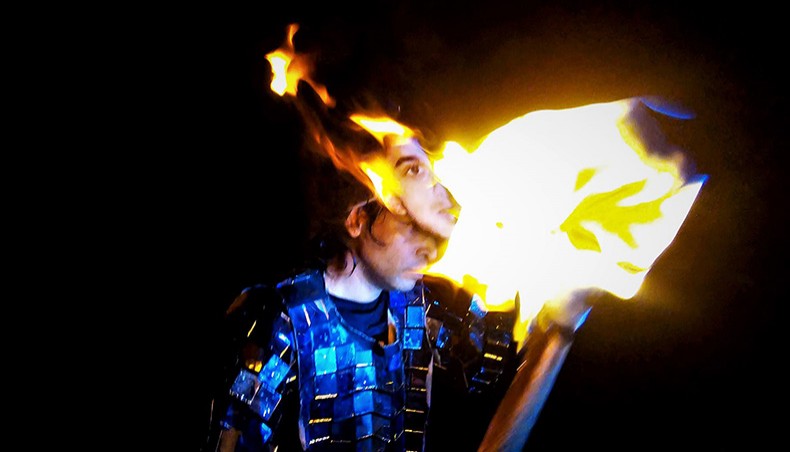 A moment from a performance presented by Amal Akash on March 6, 2020 on the banks of river Shitalakkha, Narayanganj to mark the death anniversary of Tanvir Muhammad Tawki. Tawki’s dead body was recovered in 2013 from the same place. — Amal Akash/photo courtesy

From Tawki to Lakingme Chakma, the violence and injustices that these young men and women have been subjected to have class, gender and ethnic dimensions. More importantly, these tragic stories of loss and the cry for justice tell us how far the state and the government remained indifferent to ensure justice for them, writes Nahid Riyasad

NEW Age Youth, on March 26, 2017, started a new series titled ‘Young Lives Matter’. For the first story of the series, we covered the death of a 17-year-old promising student, also a poet and essayist Tanwir Muhammad Tawqi. The intention behind the series was to focus on the system’s indifference towards young lives and injustices done to lives representing the future of the nation.

The Rapid Action Battalion investigating the murder of 17-year-old Tawki has not submitted the charge sheet in eight years since March 2013, when he went missing and was found dead afloat in a canal. The battalion was assigned to investigate the murder following a High Court order in May 2013 as Tawki’s father filed a petition seeking an intervention of the court to expedite the investigation. In March 2014, the battalion in a press conference said that it had found, based on confessional statements of two of the suspects made under Section 164 of the Code of Criminal Procedure, 11 people to be involved in the murder and it would submit the charge sheet soon, which has not so far happened.

Eight years later, the battalion now claims, as it did many times before, that they are investigating the case with ‘due importance’, but could not confirm when exactly the investigation will be completed and the charges will be framed. In a protest gathering in Narayangaj on the 8th anniversary of Twaki’s brutal murder on March 6, the Santras Nirmul Mancha termed the delay as ‘intentional’ and blamed the prevailing culture of impunity that the ruling quarter enjoys for the stalled investigation.

He was not the first and he was certainly not the last. Over the past four years, New Age Youth has written more than two dozen stories, each covering the death of a young person, deaths that are either result of violence by state or non-state actors or from the systemic failure.

Sohagi Jahan Tonu, Rajib Hossain, Hasib, Krittika Tripura, Nusrat Jahan Rafi, Himu, Chanchal, Lakingme — there are only a few names of the youths we have lost in the last four years as the system has failed to protect them. On March 3, the High Court ordered to launch a probe into the custodial death of a young lawyer Rezaul Islam Reza. He was taken into the Detective Branch custody on December 29, 2020. He died on January 2, 2021, a day after admitting to the Barisal Sher-e-Bangla Medical College Hospital. On March 5, the victim’s father Younus Munshi went to file a case against three police officials at the Kotwali Police Station. However, they refused to record the case.

However, it's not always a case of direct violence. Take the example of Rajib Hossain, a student of the Government Titumir College in Dhaka. April 3, 2018, was just another every day. Like the day before, he was commuting from home to college, but it was not every day. As he was standing on the footbed of a bus, his hand was dismembered between two buses. He also sustained serious injuries to his head and ultimately succumbed to his death at Dhaka Medical College on April 16.

He was rushed to the nearby Samorita Hospital where doctors refused to treat him as no family members were present. When relatives arrived, doctors found that the dismembered hand was still missing. People went to the accident spot, recovered the hand and returned. The procedural delay made it medically impossible to reattach the accidentally amputated hand. His death, as many fellow students have claimed at the time, as a result of the negligent and inefficient public health system and fatally risky public transport sector.

Death has even easier access to the lives of young workers in Bangladesh. On May 5, 2018, Rashedul Islam Hasib, a young apparel worker joined work despite poor health conditions. He was refused a leave a few times by his manager and he died on the line of duty on that day. Earlier on October 13, 2016, another apparel worker Taslima Akhter died a similar death when she was denied leave.

Abrar Fahad and Nusrat Jahan Rafi’s murder also sparked protests around the country due to the nature of the killing. Abrar was the victim of ‘ragging culture’ in the university and Nusrat was the victim because she said ‘no’ to her stocker, who happens to be her teacher. Despite the Awami League’s youth-friendly narrative in the 2018 election manifesto, justice for any of these cases of tragic death is served.

Bangladesh is passing through a phase where demographic dividend — more young people available to enter the workforce and less number of dependents — if addressed properly, can trigger an enormous economic boom. With the proper policy, budget and execution, Bangladesh can reap off benefits from this opportunity. Instead, we observe an escalating sense of frustration among the youth. Earlier in 2018, at least 11 students of the University of Dhaka committed suicide in separate incidents. New Age Youth published a story documenting the suicides and some of the reasons were: relationship failure, societal pressure to do ‘something’ in life, inability to cope up with urban lifestyle and so on.

Nowshad Hasan Himu, known as an animal lover and young citizen rescuer, set himself on fire on the 6th anniversary of the collapse of Rana Plaza on April 24, 2019. He was one of the first responders to the collapse and rescued many survivors from the rubbles of Rana Plaza. Talking to his friends and family, New Age Youth learnt that he could not, anymore, cope up with the trauma and took his own life. A young man who spends hours attending to injured stray cats or dogs, treasured all forms of lives, un-hesitantly took his own life. And, it says a lot about the way state and society care for its next generation. Such societal apathy is more visible when we look at the cases of young women from Shohagi Jahan Tanu to Kirtika Tripura to Lakingme Chakma. The chances of getting justice get even grimmer if the young women are from any ethnic minority community. Lakingme Chakma, a 14-year old girl from Teknaf was abducted, subjected to religious conversion and marriage and allegedly murdered.

The violence and injustices that these young men and women made victim have class, gender and ethnic dimension. More importantly, these tragic stories of loss and the cry for justice tell us how for the state and the government these young lives don’t matter.