‘Snippets Behind Bars and Other Stories’: an exhibition telling the stories of lives behind lenses 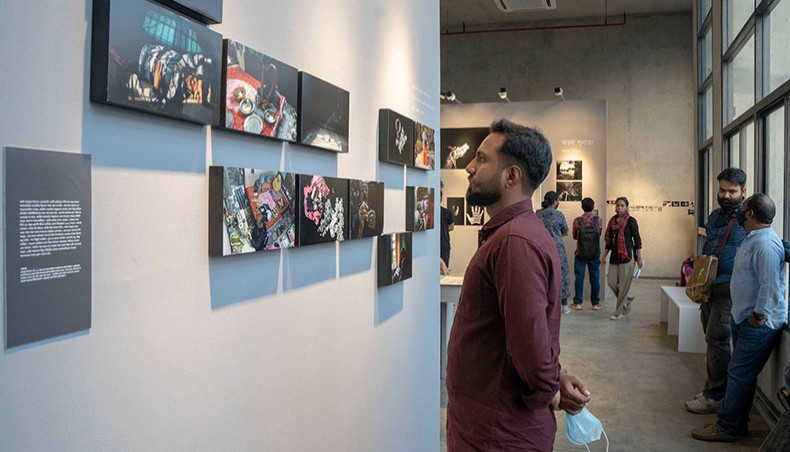 Audiences at the exhibition titled ‘Snippets Behind Bars and Other Related Stories’ organised by Drik at the DrikPath Bhaban in Dhaka. — Sumon Paul/Drik

Drik has organised a 10-day exhibition titled ‘Snippets Behind Bars and Other Related Stories’, a compilation of 13 stories describing the challenges of photojournalism, which will remain open till March 20. Nasir Uz Zaman reviews the exhibition

Drik is organising the exhibition when mass media and the journalist community in Bangladesh are passing a critical time, when pens, paintbrushes, and camera lenses are encountered with various forms of oppression for the Digital Security Act, and when journalists are facing a number of difficulties amid COVID-19 pandemic, including the fear of losing jobs. The exhibition Snippets Behind Bars and Other Related Stories is undoubtedly a remarkable documentation of the time and space in which the journalists are passing through.

The exhibition, curated by ASM Rezaur Rahman, is dedicated to the daily Bangladesh Samachar’s Companiganj correspondent Borhan Uddin Mujakkir who died on February 20 after he had been shot while covering a clash between two factions of the ruling Awami League and the writer Mushtaq Ahmed who was arrested in a case filed under the Digital Security Act and died in the high-security Kashimpur jail during his nine-month-long detention.

The 13 stories and photojournalists featured in the exhibition are Internal Conflict by Sabina Yesmin, The Man of Light by Joyeeta Roy, Memory by Farzana Akhtar, Trishul by Shujaul Islam Shuja, Snippets Behind Bars by Abu Jafor, Stagnant Time by Monon Muntaka, Termination by Nazmul Islam, The Feeling of Nothingness by Rahat Karim, Invincible by Nipa Monalisa, Fugitive Roads by Md Al Mamun Jibon, 34 Years by Abdur Raihan Jewel, Olive Gaze by a journalist from the Chittagong Hill Tracts area and News at Five by Sayoda Mahafuza Misti. Different mediums such as photography, audio, audio-visual, and scrapbook are used in the exhibition for presenting the stories.

Joyeeta Roy’s work titled ‘The Man of Light’ presents the story of a photojournalist Rajib Dhar who lost his job during the COVID-19 pandemic. Rajib whose passion and profession was to tell stories through his photographs has become the subject of Joyeeta’s story. Joyeeta captured the everyday moments of Rajib including his time with the family and his struggles for survival including his depression after he lost his job. Another story of losing jobs in Coronavirus pandemic time is presented in the work titled ‘Termination’ by Nazmul Islam. Many journalists have lost their jobs at the stroke of a pen with the excuse of the on-going COVID-19 pandemic without following the labour laws and Nazmul is one of the victims who worked as a photojournalist for around eight years.

The work ‘Internal Conflict’ by photojournalist Sabina Yesmin presents her inner-conflict while maintaining family life and professional life during the pandemic period. The story shows that Sabina had anxiety and fear that the family would contract the COVID-19 because of her but she had to fulfil her professional responsibility also which threw her in the internal conflict. As a mother and a photojournalist, she was afraid for the family and also the photos in the newspaper clicked by her gave her the joy of  same creation like looking at the daughter’s face. While Sabina’s story says her internal conflict, Farzana Akhtar’s work ‘Memory’ shows the emptiness in the news editor of the Daily Shomoyer Alo Humayun Kabir Khokon’s family after he passed away suddenly with the Coronavirus.

It is not something new that journalists face several forms of harassment, cases, torture even death for covering stories on irregularities of the powerful quarters. ‘Fugitive Roads’ by Md Al Mamun Jibon describes such a story showing the places where the journalist hid after a case was filed against him under the Digital Security Act for criticising the administration on social media about mismanagement in relief distribution during COVID-19 pandemic. The exhibited work also shows a picture that Jibon is walking at the courthouse which says that his time is passing by communicating with the lawyer and appearing before court. Another work ‘Snippet Behind Bars’ by journalist Abu Jafor is depicting his short notes written while he was in Keraniganj jail for more than one month in a case filed under the Digital Security Act.

The Digital Security Act is not the only barrier for the journalists but there are other barriers also, shows the work ‘Olive Gaze’ by a journalist from the Chittagong Hill Tracts area. The work says that journalists had to publish news reports under different government agencies’ pressure before the peace treaty but the pressure has taken a different form after the peace treaty. Challenges of journalism in the India-Bangladesh border area are showed in the work titled ‘Trishul’ by visual journalist Shujaul Islam Shuja. Shuja in his work describes that journalism in the India-Bangladesh border areas is practiced under a three-way pressure — the Indian Border Security Force, the Border Guard Bangladesh, and politically powerful local gangs of smugglers.

The 10-day-long exhibition will remain open to the visitors till March 20 from 3:00pm to 8:00pm every day and everyone is welcomed to become a part of this historically important documentation and to learn the stories of the people who choose the life of telling stories to the people.