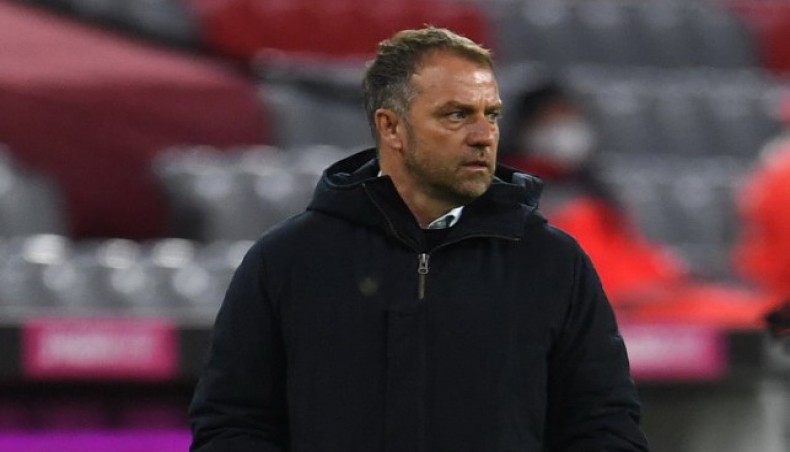 Bayern Munich boss Hansi Flick on Friday brushed off speculation that he could be Germany's next head coach, but refused to rule out replacing Joachim Low this summer.

After nearly 15 years in charge of Germany, Low, 61, revealed Tuesday he will step down as head coach after the European championships in July.

Unlike Liverpool manager Jurgen Klopp, who has clearly ruled himself out of the running to replace Low, Flick was ambiguous about the Germany speculation.

‘I have a contract until 2023 and I want to continue to work successfully at Bayern Munich and win titles,’ Flick said ahead of Saturday's league game at Werder Bremen.

‘Everything else is speculation, I don't want to get involved.’

Flick was initially only made caretaker coach of Bayern in November 2019 after Nico Kovac was sacked.

However, his stock soared after Flick lifted the Champions League title at his first attempt as Bayern won the treble last season.

For now, Flick wants ‘to concentrate 100 per cent on Bayern Munich and the team. There is no time to speculate about my future.’

The German Football Association (DFB) has said it will not rush into naming Low's replacement.

While Flick insists his focus is on the ‘here and now’, questions about his future will persist until he rules himself out.

Germany team director Oliver Bierhoff has said he would ‘be crazy’ not to consider Flick as head coach of the national side.

‘Do I think he can do it? Absolutely,’ said Bierhoff.

However, Bayern chairman Karl-Heinz Rummenigge has made it clear they will not release Flick from his contract, which runs until 2023.

‘We will not solve the DFB's problems for them,’ Rummenigge said tersely last month.

However behind the scenes, Bayern have reportedly approached RB Leipzig boss Julian Nagelsmann as a possible replacement for Flick.

The 33-year-old Nagelsmann, whose Leipzig contract runs until 2023, has been linked to not only Bayern, but also Barcelona since their Champions League exit on Wednesday.

‘I know how the business of football works,’ Nagelsmann said Friday. ‘But it would be disrespectful to talk about these topics.’