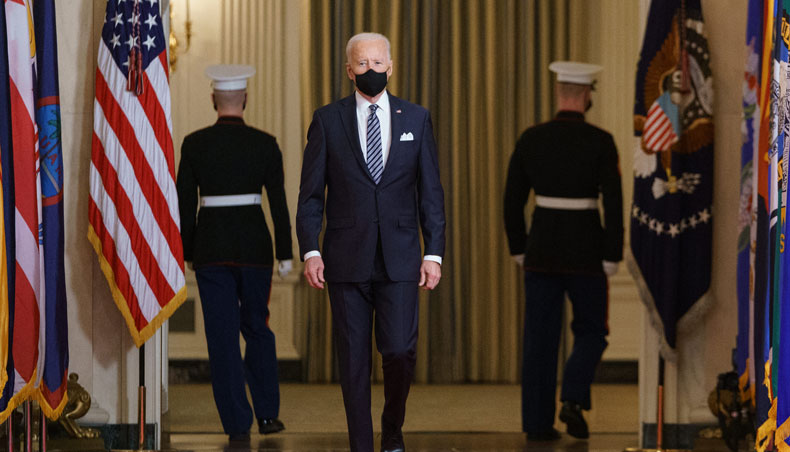 US president Joe Biden walks from the State Dining Room to the East Room to deliver an address to the nation on the anniversary of the start of the COVID-19 pandemic, in the East Room of the White House in Washington, DC on March 11, 2021. — AFP photo

The United States president Joe Biden on Thursday condemned what he called ‘vicious hate crimes’ committed against Asian Americans since the start of the coronavirus pandemic, calling such acts ‘un-American’ and demanding they stop.

‘Too often, we’ve turned against one another,’ Biden said in his first primetime address, detailing the progress made in the fight against COVID-19.

The Democratic president decried ‘vicious hate crimes against Asian Americans who have been attacked, harassed, blamed and scapegoated’ over the pandemic, which originated in China.

‘At this very moment, so many of them, our fellow Americans – they’re on the front lines of this pandemic trying to save lives and still, still they’re forced to live in fear for their lives just walking down streets in America,’ Biden said.

Activists said that broader anti-Asian discrimination had been fuelled by talk of the ‘Chinese virus’ from former president Donald Trump and others.

Racial motivation is hard to establish in many cases, but reported anti-Asian hate crimes more than doubled from 49 to 122 last year across 16 major US cities including New York and Los Angeles – even as overall hate crime fell, according to a California State University study.

The report looked at events categorised as criminal in nature and showing evidence of ethnic or racial bias, using preliminary local police data.

It aligns with another study from the Stop AAPI Hate advocacy group showing more than 2,800 incidents of racism and discrimination — including non-physical forms — targeting Asian-Americans and reported online across the United States between March and December last year.