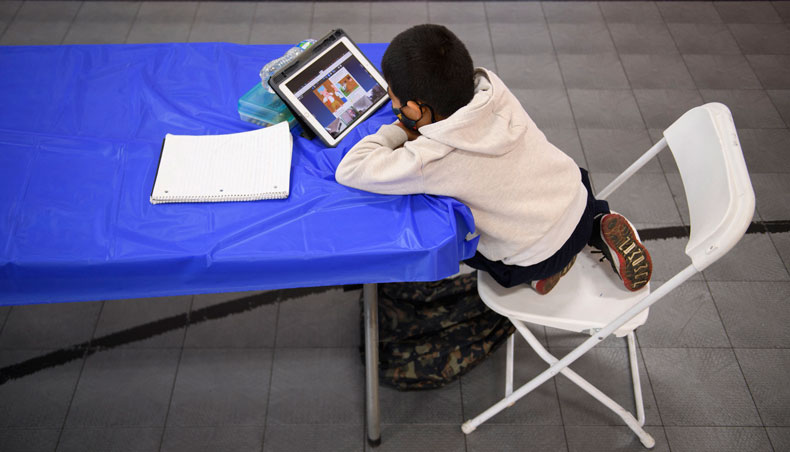 In this file photo a child attends an online class at a learning hub inside the Crenshaw Family YMCA during the COVID-19 pandemic on February 17, 2021 in Los Angeles, California. — AFP photo

Closed schools, surging poverty, forced marriages and depression – after a year of the pandemic, indicators measuring child and adolescent development have all regressed, a setback that heralds lasting stigma for an entire generation, UNICEF had warned.

‘The number of children who are hungry, isolated, abused, anxious, living in poverty and forced into marriage has increased,’ Henrietta Fore, executive director of the United Nations International Children’s Emergency Fund, said in a statement released exactly one year since the World Health Organisation classified COVID-19 as a pandemic.

‘Their access to education, socialisation and essential services including health, nutrition and protection has decreased. The signs that children will bear the scars of the pandemic for years to come are unmistakable,’ Fore said in the statement.

Faced with such ‘devastating’ effects, Fore urged for children to be placed ‘at the heart of recovery efforts,’ particularly by ‘prioritising schools in reopening plans.’

UNICEF cited a series of worrying figures in support of Fore’s words.

While the pandemic has taken a heavy toll on the elderly, children and adolescents under 20 make up 13 per cent of the 71 million coronavirus cases reported in the 107 countries that provided age-specific data.

In developing countries, projections show a 15 per cent increase in child poverty.

Six to seven million more children could suffer from malnourishment in 2020, an increase of 14 per cent that could translate to more than 10,000 additional deaths per month, mainly in sub-Saharan Africa and South Asia.

For 168 million students around the world, schools have been closed for nearly a year. A third of those students do not have access to online education.

Children ‘have a right to learn and to be prepared for the world that awaits them, but it’s beyond that,’ Sanjay Wijesekera, UNICEF’s global director of programmes, told AFP.

‘When children are out of school, and their parents don’t have jobs, and don’t have income that creates certain dynamics that result in families looking for other options and girls being forced into early marriages,’ Wijesekera said.

As a result of the shuttered schools and worsening economic situation, the pandemic could lead to the marriage of 10 million children by 2030, adding to the 100 million girls already considered at risk of marriage by then.

At least one in seven children or adolescents has spent the majority of the past year under lockdown orders, increasing anxiety, depression and isolation, according to Unicef.

The coronavirus has also led to the suspension of vaccination campaigns against other diseases — starting with measles — in 26 countries, increasing threats to the health of non-immunised people.

‘Children have paid a heavy price,’ Wijesekera said, adding, ‘And that’s why it is important that children are at the heart of the recovery. Some of these scars will last a long time.’