42 lakh teachers, students not to get vaccine 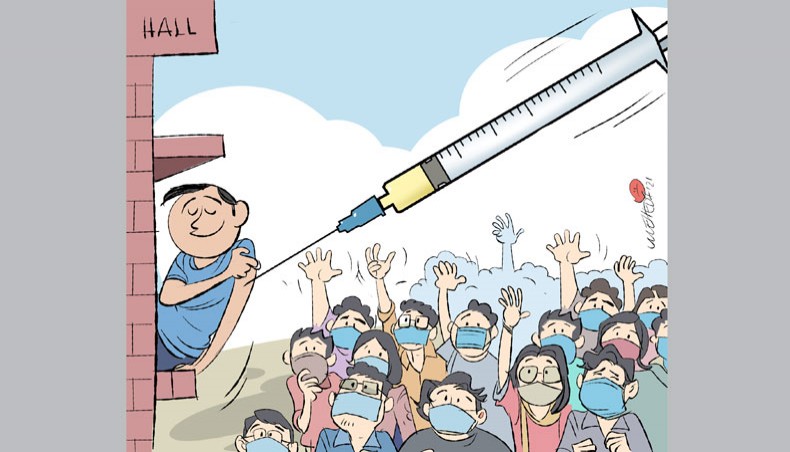 Directorate General of Health Services officials said that the directorate would include over 10.1 lakh teachers, staff members and residential students of the public universities under the urgent vaccination coverage before the reopening of institutions while agencies under primary education ministry and education ministry officials said that the total number of teachers staff and university-level students in the country was over 52.10 lakh.

They did not have data on the number of teachers and staff of kindergartens and qawmi madrassahs.

Keeping such a large number of teachers, staff and students aged over 18 years outside the vaccination coverage might increase the rate of COVID-19 contamination after the reopening of educational institutions after closure for over a year for the outbreak, hearth experts said.

‘Everybody aged over 18 years must be vaccinated before the reopening of educational institutions and everybody must be forced to use masks at all institutions,’ said eminent virologist Md Nazrul Islam.

Professor Nazrul, also a member of the national technical advisory committee on COVID-19, said that there should not be any divide between resident and non-resident students or public or private institution teachers or staff.

Otherwise, he said, the risk of spreading the virus might increase.

The schools, colleges and aliah madrassahs will  reopen after over a year on March 30 while universities will reopen on May 24, maintaining the health guidelines after vaccinating a selected number of teachers and students.

‘Non-residential public university students and students of private universities and colleges under national universities will remain out of the vaccination coverage,’ she said.

Directorate of Primary Education director Md Mijanur Rahman said that of the 3,68,348 of whom 1,90,275 had been vaccinated till Tuesday and the remaining others would be vaccinated before the reopening of the education institutions on March 30.

He said that instructions had been passed to bring all the kindergarten, non-government primary and English medium school teachers to bring under the vaccination coverage but the number of such teachers and staff was unknown.

Directorate General of Health Services management information system director Mizanur Rahman, however, said that the directorate had included lists of almost nine lakh teachers and staff members on the urgent vaccination list developed from the list sent by the primary education and education ministries.

‘List of 1.30 lakh students sent by the education ministry will be included in the sub-category under the educational institutions of the Surakkha App soon,’ Mizan said.

Mizan said that the directorate did not have a plan to include teachers and staff members of kindergartens, qawmi madrassahs on the urgent vaccination coverage as soon as the government agencies did not have authentic data on such facility providers.

Teachers of many government registered non-government schools and colleges, however, claimed that they did not get the urgent vaccination schedule even after several attempts.

Vice-president of Bangladesh Shikkhak Union Jahangir Alam Khan, also principal of Lakkhipur-based Janata Degree College, said that teachers aged under 40 years of age did not get any schedule to get the vaccine.

Bangladesh Bureau of Educational Information and Statistics senior systems analyst Md Abu Taher Khan explained the reason saying that the number of teachers and staff of secondary and higher secondary school, college and aliah madrassah in 2020 was 7.35 lakh and the government brought only 5.69 lakh under the urgent vaccination coverage.

The bureau, he said, had no data of the number of teachers at qawmi madrassah, which did not follow the government curriculums.

‘Private universities did not give us the number of their staffers,’ Ferdaus Zaman said, adding that many public and private university teachers aged over 40 years had already been vaccinated.

The commission, he said, urged the government to bring all teachers and staff members of public and private universities under the urgent vaccination coverage.

Dhaka College principal IK Selim Ullah Khandoker said that he would send a list of 3,000 residential students of the college to bring them under the emergency vaccination coverage.

‘Of the 336 colleges under the National University, over 150 have hostels and these students also should get the jab,’ said Selim.

Association of Private University of Bangladesh president Sheikh Kabir Hossain also demanded the inclusion of all teachers and students.

Health secretary Md Abdul Mannan said that gradually all teachers, staff members and students would be brought under the vaccination coverage as the government is in the process of bringing in a huge number of vaccines.