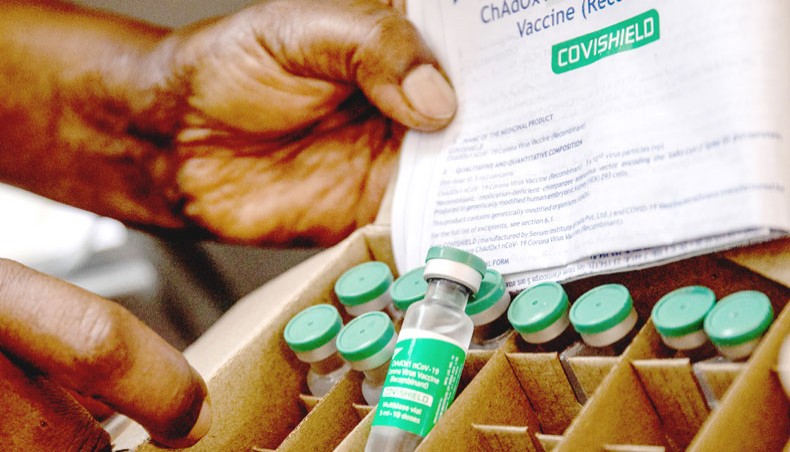 A staff member of Uganda’s ministry of health holds a box of Oxford/ AstraZeneca COVID-19 vaccines at Mulago referral hospital in Kampala on the first day of a vaccination campaign on March 10. — Agence France-Presse/Badru Katumba

BY NOW, anybody speaking about vaccine equality and equity of access must surely be coming across as slightly deranged. In the field of COVID-19, traditional proprietorial instincts remain. Add to this the disparity in terms of manufacture, bureaucracy and the nasty flavour of politics, and we would all be entitled to long draughts of cynicism.

The COVID-19 Vaccines Global Access Facility, or COVAX, scheme, supposedly a levelling measure in ensuring global equitable and cheap access to vaccines, risks looking like a rhetorical bauble. Co-led by Gavi, the Coalition for Epidemic Preparedness and Innovations and the World Health Organisation, these collaborators seek to ‘accelerate the development and manufacture of COVID-19 vaccines, and to guarantee fair and equitable access for every country in the world.’ The aim of the group is to supply two billion doses by the end of 2021. Last month, the World Trade Organisation reported that 130 countries, comprising 2.5 billion people, had yet to receive a single dose.

The project has hit a rather large snag. Many countries are not willing to play along. If they do, they are doing so in two-timing fashion. WHO senior adviser, Bryce Aylward, is worried that ‘some countries are still pursuing deals that will compromise the COVAX supply.’ This lack of fidelity to the cause is also of concern to the WHO director-general Tedros Adhanom Ghebreyesus. ‘We can’t beat COVID-19 without vaccine equity. Our world will not recover fast enough without vaccine equity, this is clear.’

A suggestion of dealing with the problems of accessing COVID-19 vaccines has been put forth by several states and international bodies. Last Friday, the WHO called for an agreement dealing with the waiver of intellectual property rights to vaccines. ‘If not now, when?’ asked Ghebreyesus.

In October 2020, India and South Africa submitted a proposal for waiving ‘certain provisions of the TRIPS (Trade-Related Aspects of Intellectual Property Rights) agreement for the prevention, containment and treatment of COVID-19.’ The waiver would be granted to WTO members so that they would not have to apply or enforce certain provisions under Part II of the TRIPS Agreement, namely Section 1 (copyrights and related rights), 4 (industrial design), 5 (patents), and 7 (protection of undisclosed information). The waiver would be in place for a duration agreed to by the General Council and till widespread global vaccination had taken place, with the majority of the world’s population rendered immune.

A briefing document on the proposal, authored by Médecins Sans Frontières, merely confirms that the proposed waiver was specific, applicable only to COVID-19 and not ‘all TRIPS obligations, nor does it suggest a waiver beyond what is needed for COVID-19 prevention, containment and treatment.’ Were the waiver to be granted, patents would not be enforced or granted on ‘all COVID-19 drugs, vaccines, diagnostics, and other technologies, including masks and ventilators, for the duration of the pandemic.’ Collaboration in research and development, manufacturing, scaling up and supplying COVID-19 tools could also take place.

In discussions held by WTO members at the TRIPS Council over October 15–16, 2020, the opponents nailed their colours to the mast. Australia, Brazil, Canada, the European Union, Japan, Norway, Switzerland, the United Kingdom and the United States were either formally opposed to the measure, or not in support of it. The COVID-19 vaccine world had been clearly demarcated: the wealthy and the rest.

The justifications from such states do not make for pretty reading. All centre on one essential theme: the importance of maintaining an ironclad IP system in the name of innovative practice. An EU spokesman suggested somewhat speciously that no evident nexus could be shown between access to vaccines and IP barriers. ‘There is no evidence that IP rights in any way hamper access to COVID-19 related medicines and technologies.’ The UK government decided to upend the cart with its reasoning, underlining the importance of having strict IP rules if access to new products to battle the pandemic were to be made available. The chair of the WHO Solidarity Trial of COVID-19, John-Arne Røttingen insists that ‘IP is the least of the barriers’ relative to necessary facilities for production, knowledge and infrastructure.

South Africa sought to address such claims on October 16 at the TRIPS Council meeting and again at the council meeting on November 20. Examples included the manufacturers of monoclonal antibody therapeutics, such as Regeneron and Eli Lilly, which had restricted their capacity via bilateral arrangements. Specifically on vaccines, South Africa could point to the struggle between MSF and Pfizer being waged in India over the pneumococcal vaccine, protected by a patent effectively blocking the development of alternatives.

As if further proof was needed about efforts by pharmaceutical behemoths to freeze and halt both innovation and access in the field of vaccines with generous IP shields, one need look no further than the case of South Korea’s SK Bioscience. The company was embroiled in patent litigation with Pfizer in developing a pneumococcal conjugate vaccine by the name of Skypheumo. SK Bioscience lost the suit, with the Supreme Court ruling that it could not sell Skypheumo until 2026, when Pfizer’s composition patent for Prevenar 13 expires.

Given that WTO decisions tend to be made through consensus, the waiver proposal has been stuck in diplomatic purgatory in the TRIPS Council. Requests from Chile, Australia and Canada for evidence that the waiver would achieve increased capacity for vaccine manufacturing and assist ameliorate shortages have not helped. Burcu Kilic, research director for access to medicines at Public Citizen sees the unfolding of a crude agenda. ‘What (high-income countries) are hoping is that they can discuss and drag the issue out that things will be OK by the summer.’

The WTO General Council meeting held at the start of this month did not see a change of heart from high-income countries towards the South African-Indian proposal. Neither the US nor the EU wished to even discuss it. What instead kept delegates busy was the proposal by WTO director-general Ngozi Okonjo-Iweala to pursue a meek third way alternative. That option would involve, according to Okonjo-Iweala, the licensing of manufacturing to countries ensuring ‘adequate supplies while still making sure that intellectual property issues are taken care off.’

Ahead of officially commencing her duties as director-general, she iterated the idea that there was a way of increasing access ‘through facilitating technology transfer within the framework of multilateral rules’ and for pharmaceutical giants to make licensing arrangements permitting other manufacturers to produce vaccines. Music, no doubt, to representatives of big pharma.

To date, the doses-ordered per capita read as a comparison of states looks stark. The United States has 10.2 doses per person, the United Kingdom 7.6, the European Union 6.5, and Australia 5. David Legge and Sun Kim, both of the People’s Health Movement, note that the African Union, in sharp contrast, has deals covering a mere 970 million doses for 1.34 billion people. Vaccine coverage, at this point, looks meagre.

Some 115 European Parliamentary members, on February 24, issued a declaration pleading for the European Commission, and the European Council to review their opposition to the TRIPS waiver proposal. Certain EU member states and the European Commission had spoken about COVID-19 medical products ‘as global goods’ but there were no ‘actionable realities.’ A waiver, the members urged, would not only cast aside onerous legal barriers to production but enable ‘the sharing of know-how and technologies with GMP manufacturers from third countries’. EU strategy had, however, been tribal, emphasising domestic production with the potential to exacerbate ‘a dangerous north-south divide when it comes to affordable COVID-19 diagnostics, personal protective equipment, treatment and vaccines.’

The vaccine fault lines suggest different timetables and differently filled pockets. Regions of the world risk remaining unvaccinated, with infections and deaths set to continue. Legge and Kim rightly see this as an abandonment by wealthier countries to chance, death and despair in favour of self-interest. Should low- and middle-income countries have to wait another year or two in the face of wealthier states ‘commandeering the vaccines, there will be about 40–50 million more cases of infections and perhaps two to three million additional deaths.’ A good number on those charts of mortality will be health workers.