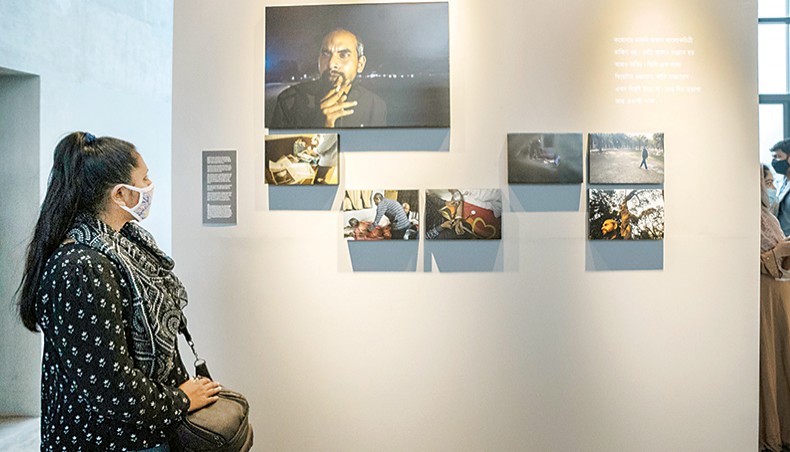 A visitor looks at displayed works at the on-going exhibition titled ‘Snippets Behind Bars and Other Related Stories’ organised by Drik at DrikPath Bhaban at Panthapath. — Sourav Lasker

A group art exhibition, showcasing photographic and multimedia presentations, telling stories behind the storytellers is under way at DrikPath Bhaban at the capital’s Panthapath.

If journalists always tell stories of other people, the exhibition gives the viewers a chance to know the stories of those journalists who have been passing through a tough time due to the Digital Security Act, fear of being jobless during the COVID-19 outbreak and how many of them balance between professional and family life. It also highlights the obstacles women photojournalists face in Bangladesh.

The 10-day exhibition titled ‘Snippets Behind Bars and Other Related Stories’ has been organised by Drik and features a total of 13 works by 13 artists and photographers. The stories the artworks tell were developed using various mediums, including photography, multimedia presentation, digital art and a scrapbook.

The exhibition addresses issues like challenges journalists face along the  Bangladesh-India border, challenges of media coverage while working in the Chattogram Hill Tracts area, fear of losing jobs in the COVID-19 situation, fear of imprisonment since the enactment of the controversial Digital Security Act, challenges of women photojournalists in society, memorabilia of a journalist who died and others.

It has been dedicated to the recently deceased writer Mushtaq Ahmed and journalist Borhan Uddin Muzakkir.

‘Mass media and the journalists in Bangladesh are currently passing a critical time because of the Digital Security Act, institutional censorship and host of other issues, including the job cuts during the health emergency,’ ASM Rezaur Rahman, the curator of the exhibition, told New Age.

‘The works had been created under a workshop organised by Drik. During the workshop, I became the curator and provided suggestions on how the works are needed to be showcased. The exhibition is based on the stories of the storytellers,’ said the curator.

Joyeeta Roy is working as a photojournalist at Bangladesh Pratidin, her work titled ‘The Man of Light’ shows the story of Rajib Dhar, who lost his job during the COVID-19 outbreak.

The photographer captured some moments depicting Rajib Dhar and his family members after he lost his job. In one of the photographs, Rajib Dhar is seen smoking cigarette unwittingly showing the frustration that has set in, which is most discernible in his eyes. There are also images that show him roaming in the parks, doing household works and many more.

Al Mamun Jibon’s work titled ‘Fugitive Roads’ shows a map of an upazila named Baliakandi under Thakurgaon district. In the map, he shows different photographs, which addresses the places where he hid after a case was filed under the Digital Security Act for criticising the police and the administration on social media. The work also shows copies of the first information report and the bail order. A photograph shows him walking across the corridor of the court when he was there to make an appearance.

Abdur Raihan Jewel’s work titled ‘34 years’ homes in on grassroots journalism and shows that it does not have the glamour some people think it has. The photographs in the story show newspaper cutting of his written reports, his family life, professional life and others.

Sabina Yesmin is working as a photojournalist at Prothom Alo, her work titled ‘Internal Conflict’, shows some photographs of her in action during the COVID-19 outbreak. Braving the risk of getting infected with the dreadful virus, she continued to dedicate more time to her profession while she also had to allocate time for her family members, especially for her daughter. It highlights how a women photojournalist divides time to excel in her professional life and be at the helm of things at home.

Farzana Akthar’s work titled ‘Memory’ shows the everyday objects including a pair of shoes, a brush, a mug, a pair of spectacles, a mobile phone and a perfume bottle. They are inscribed with memories as they once belonged to the former news editor of Daily Shomoyer Alo, who died of COVID-19.

Abu Jafor’s work titled ‘Snippet Behind Bars’ is a scrapbook in which the journalist’s letters were showcased. The letters were penned while he was in jail in a case filed under the Digital Security Act.

The exhibition began on March 10 and will remain open till March 20 and is open to viewers from 3:00pm to 8:00pm every day.