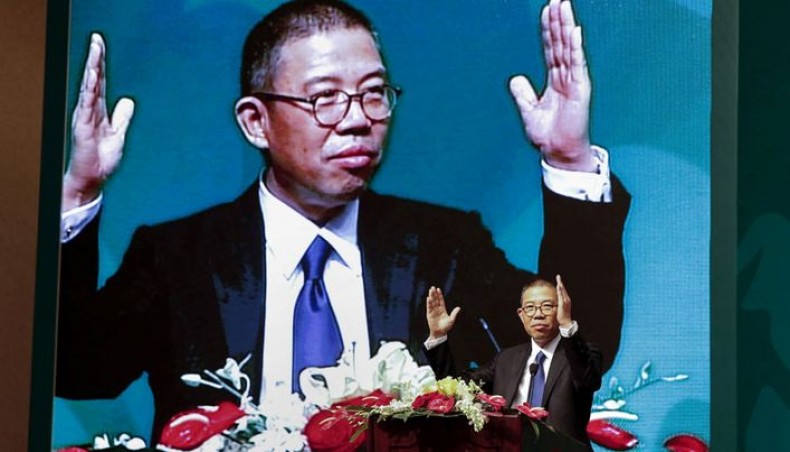 This photo taken on May 6, 2013 shows Zhong Shanshan, chairman of Nongfu Spring mineral water and a separate pharma company, gesturing during a speech at a press conference in Beijing. -- AFP photo

Until recently, few people had even heard of the Chinese billionaire with a gruff reputation who built a fortune on China’s seemingly unquenchable demand for his ubiquitous red-capped bottled water.

Zhong’s net worth has surged to $85 billion and made him the seventh-richest person on the planet, Hurun report, a China-based compiler of ‘rich lists’, said last week.

Called a ‘lone wolf’ by Chinese media for his rare public appearances and aversion to interviews, Zhong has achieved one of the fastest accumulations of wealth in history, according to Bloomberg.

He became the first Chinese entrepreneur to enter Hurun’s top-ten global rich list this year, leaping out of nowhere to put him hot on the heels of Facebook’s Mark Zuckerberg and American investor Warren Buffett.

Not bad for someone who dropped out of school at the age of 12 during the political upheaval of China’s 1966-76 cultural revolution, and whose later jobs included bricklayer, carpenter and news reporter, according to Chinese media.

Zhong founded Nongfu Spring in 1996 and still owns an 84 per cent stake in the company which, according to market research firm Mintel, holds more than a quarter of the bottled water market in China, where many people avoid tap water over health concerns.

In contrast to charismatic Alibaba founder Jack Ma — who Zhong dethroned as China’s richest man — little is known about Nongfu’s billionaire boss aside from his gruff image.

‘I don’t have the habit of flattery in my personality,’ he once told Chinese media in a rare interview.

‘I don’t like to deal with people and have to drink,’ he added, referring to a Chinese business culture that encourages excessive wining and dining to cement deals.

His fortunes have risen just as those of Chinese tech companies have slid.

Ma is now worth a comparatively paltry $55 billion, according to Hurun, after government regulators launched an anti-monopoly investigation into his tech empire, which has pummelled Alibaba’s share price and left a massive IPO by financial arm Ant Group in limbo.

Although Alibaba and Nongfu are headquartered in the humming eastern tech hub of Hangzhou, Zhong is not a regular attendee at the city’s business events, one local entrepreneur told China Economic Weekly.

A former business partner told state media he once attended an industry conference with Zhong, who ‘went to the stage to give a speech, and offended everyone as soon as he opened his mouth’, without providing details of the offending words.

Alongside Nongfu, which listed last year in Hong Kong, Zhong is also the biggest shareholder in Wantai, which went public in Shanghai.

The group’s rapid COVID-19 test gives results in 75 minutes and, according to its website, has shipped more than 10 million kits.

Wantai is also developing a COVID-19 vaccine nasal spray in conjunction with a prominent university.

Wantai is the biopharma arm of Yangshengtang Group, a medical company Zhong founded three years before Nongfu, which specialises in infectious diseases and says it is the largest production base in Asia for HIV diagnostic reagent.

Hurun says the share listings make Zhong one of only a handful of entrepreneurs in the world today to have founded more than one $10 billion business.

Zhong has a stake, investment or board role in more than 100 companies, according to Chinese business data.

But like other high-profile Chinese industrialists, he has to tread a line between commercial success and official scrutiny.

‘The Chinese Communist Party wants Chinese businesses to become big and become international, but it also wants to retain some degree of control over them,’ said Yun Jiang, director of China policy centre in Canberra.

She says no high-profile business people can entirely hope to ‘escape political scrutiny’ — particularly once they appear on rich list rankings.