MCCI for reduction in corporate tax 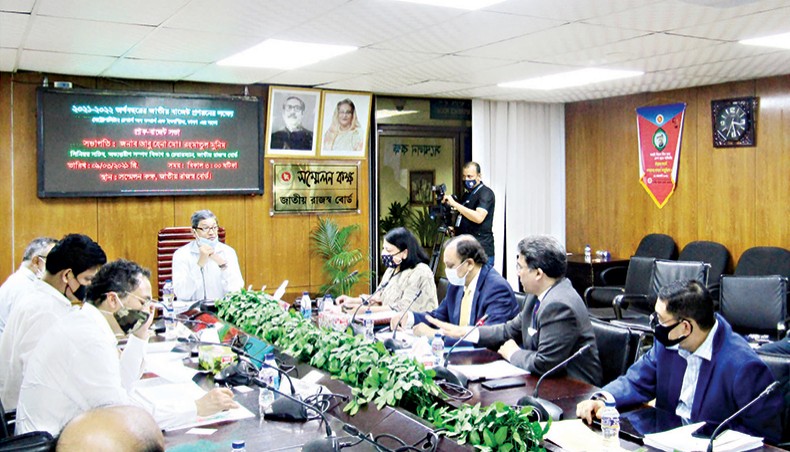 NBR chairman Abu Hena Md Rahmatul Muneem presides over a pre-budget discussion with a delegation of Metropolitan Chamber of Commerce and Industry held at the NBR headquarters at Segunbagicha in Dhaka on Tuesday. MCCI president Nihad Kabir led the delegation. — New Age photo

The Metropolitan Chamber of Commerce and Industry on Tuesday said that businesses were not receiving the benefits of the reduced rate of corporate income tax as the existing withholding taxes at different stages were raising the effective tax rate to abnormally high levels.

The MCCI demanded rationalisation of withholding taxes to bring down the effective corporate tax rate saying that the higher effective tax rate was affecting both domestic and foreign investment in the country.

The chamber made the observations at a pre-budget discussion with the National Board of Revenue held at the NBR headquarters in Dhaka.

The government reduced the corporate income tax rate to 32.5 per cent from 35 per cent in the fiscal year 2020-2021 but the effective tax rate went up to 50-60 per cent due to withholding taxes at different stages, including the import and middle stages of production and on  finished goods, said MCCI president Nihad Kabir.

She also requested the revenue board to formulate the upcoming national budget for the fiscal year 2021-2022 keeping the COVID-19 fallouts in mind so that business activities could return to pre-COVID levels.

She urged the NBR to gradually bring down the corporate tax rates as part of the preparations to graduate from the Least Developed Country (LDC) status by 2026.

MCCI taxation sub-committee chairman Adeeb H Khan said it was difficult to say what the corporate tax rate in the country was as the effective tax rate was much higher than the announced one.

While presenting the MCCI budget proposals, he proposed that the advance income tax on import, supply chain and services should be reduced.

The MCCI also demanded that no limit should be imposed on promotional expenses as it hurts the fast moving consumer goods (FMCG) companies.

The new law has narrowed the scope for input tax rebate raising the actual VAT rate above 15 per cent, it said.

Earlier in the morning, the Bangladesh China Chamber of Commerce and Industry at a separate meeting demanded that the finance act should be given a prospective effect instead of a retrospective effect so that the taxpayers could undertake efficient tax planning.

The government may introduce tax rates for two years in the Finance Act 2021 to facilitate the prospective effectiveness of the act, it said.

The revenue board should also give refunds on time to ensure justice for the taxpayers and reduce harassment by the tax authority, it added.

The Anti-Tobacco Media Alliance (ATMA) urged the NBR to impose specific taxes and to raise the price of all tobacco products, including cigarettes, bidis and smokeless tobacco items, to save lives and increase revenue collection.

The alliance proposed imposition of a uniform 65 per cent supplementary duty along with specific excise tax, 15 per cent value-added tax and 1 per cent health development surcharge on the final retail price of all types of cigarette.

Terming the existing tobacco taxation structure as highly complex and not efficient enough to discourage the use of tobacco products, the ATMA said that implementation of the proposed tobacco price and tax measures would prevent around 8 lakh premature deaths and facilitate additional earnings worth Tk 3,400 crore in revenue.

The Women Entrepreneurs Network for Development Association (WEND) proposed that the tax-free ceiling should be increased for women entrepreneurs and third genders.

The Bangladesh Women Chamber of Commerce and Industry demanded VAT exemption for women entrepreneurs for a certain time to recover the losses incurred during the COVID outbreak.