1.3 lakh resident students to get vaccines by May 17: Dipu Moni 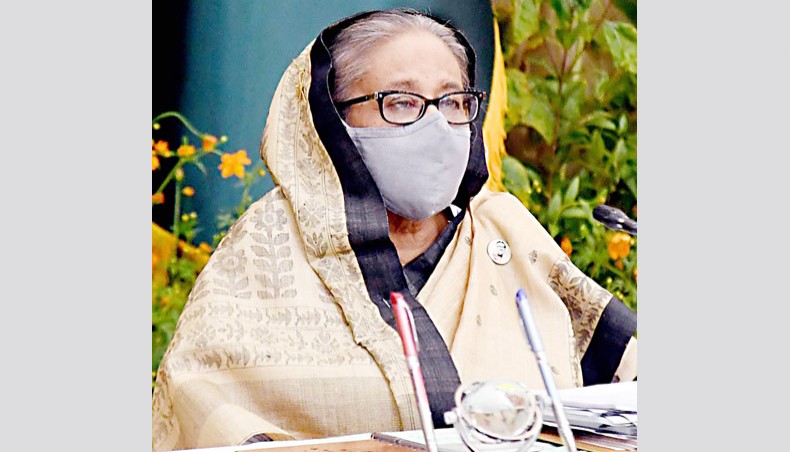 Prime minister Sheikh Hasina on Tuesday once again asked all concerned to ensure mandatory use of masks and maintain social distancing as the second wave of the coronavirus was feared in the coming summer.

Presiding over the weekly cabinet meeting virtually from her official residence Ganabhaban, she said all should compulsorily use masks whether they get vaccines against the COVID-19 or not in the wake of further rise in the number of deaths from COVID-19-induced infections.

Cabinet members and  secretaries to the ministries concerned joined the meeting from the secretariat.

‘The prime minister has once again asked all to ensure mandatory use of masks. She said we should not feel that we are in a comfortable zone. Obviously, we are in a better position now than peoples in many other countries,’ cabinet secretary Khandker Anwarul Islam told a briefing at the secretariat.

He said that experts feared a rise in the infection rate in the summer months — April-May-June — as in the previous year.

The prime minister in the past on several occasions gave similar instructions to ensure mandatory use of masks at all offices, public places and markets, but those could not be executed accordingly.

She earlier ordered the operation of mobile courts to ensure the mandatory use of masks at public places, which is rarely seen nowadays.

About the lax in enforcement of mandatory use of masks, Anwarul said the authorities would again go for actions if necessary and continue to make people aware about mask use to check further spread of the virus.

Responding to a question, the cabinet secretary said educational institutions would reopen as per schedules announced by the government.

Emerging from the cabinet meeting, education minister Dipu Moni told reporters that a total of 1.3 lakh resident students of public universities would be vaccinated against COVID-19 by May 17 as their dormitories would reopen on the day.

Schools, colleges and madrassahs are slated to reopen on March 30 while universities would resume classes on May 24.

All educational institutions remained closed since March 18, 2020 due to the COVID-19 outbreak.

Anwarul said that it was discussed in the meeting that many people were seen not wearing masks and joining big social gatherings without maintaining the health guidelines as infection rate went down towards the end of winter.

Crowds of people at tourist destinations had also increased remarkably raising the risk of infections, he added. ‘The prime minister has asked all to remain alert to the possibility of infections,’ he added.

The cabinet secretary said that the prime minister had asked all concerned to hold public gatherings with a limited number of people as COVID-19 infection rate was again increasing with the advent of summer.

The COVID-19 cases and test positivity rate has suddenly started to rise in the last couple of days.

On Tuesday, the number of cases jumped to 912, highest in nearly two months after January 10, the day the DGHS detected 1,071 cases.

The number of deaths from the virus was 13 on the day.

The test positivity rate on Tuesday was 5.13 per cent, also highest in the past 50 days.

The positivity rate remained below 3 per cent in 49th, 50th and 51st week of outbreak, but it rose to above 3 per cent in the 52nd week and rising further in the ongoing week of 53rd.